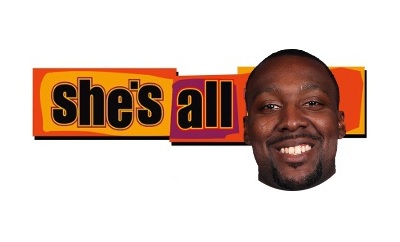 Girls with glasses sure would be beautiful if they didn’t wear glasses, huh?

That’s what the movies would have you believe, anyway.

You all know what I’m talking about. It’s a classic movie trope: the bookish, plain-looking girl with glasses is picked on by everyone because she wears glasses and she’s so boring. But one day she decides to take off the glasses, and—blam!—it turns out she’s smoking-hot. Who knew, right?

If the girl wears her hair in a bun—particularly a severe bun, as they’re so often described—she’s doubly smoking-hot. A woman in a movie with bun hair and glasses can mean one of two things: she’s either a sadistic schoolmarm, or she’s an unbelievably hot girl in disguise.

So how do these shy, bookish girls find out that deep down inside, they’re actually red-hot mamas? Well, it usually requires the intervention of a sensitive guy who belongs to the “in” crowd. He’s probably a jock or at least some kind of lady killer, and for whatever reason he takes a shine to the nerdy girl and convinces her to lose the spectacles. Think Freddie Prinze Jr. in She’s All That. (Yes, I’ve seen that movie. So what?) This kind of thing also happened between William Katt and Sissy Spacek in Carrie, although to be fair, Carrie did not wear glasses. (I’m not the only person who thought Sissy Spacek was hot in Carrie, right?)

Now, the idea that you can’t tell a girl is attractive just because she’s wearing glasses is about as logical as not recognizing Clark Kent when he’s dressed up as Superman, but try telling that to a She’s All That/Superman fan. At the movies we suspend our disbelief, and as soon as a sensitive jock enters the equation, we know that the girl with glasses we were looking at is no schoolmarm: she’s a babe. She just doesn’t know it yet.

If there’s a sensitive jock of the NBA, it would have to be the San Antonio Spurs. Yes, I know I already said the Spurs were the Ghostbusters of the NBA (and I stand by that column), but they’ve also demonstrated a penchant for recognizing beauty where others just see girls in glasses.

Look at Boris Diaw. He seemed promising at the start of his NBA career with the Phoenix Suns, but he started to look like a dud in Charlotte. He was waived by the Bobcats (Michael Jordan may be a jock, but apparently not a sensitive one) and his career appeared to be in a tailspin. Cue the Spurs, who signed Diaw and showed the world what an awesome player he is. Sure, he may be slightly pudgier than you want your elite athletes to be, but he can play every position on the floor, for crying out loud! Diaw rewarded the Spurs for recognizing his inner hotness by helping lead them to an NBA Championship.

And who could forget Patty Mills? An NBA player who became a D-Leaguer who then went to play in Australia and China and is now back in the NBA, playing for the Spurs (who else?) and sitting pretty at the top of the basketball heap.

Yes, the Spurs recognize the beauty in players that others fail to see. If they were in a movie, they’d be Freddie Prinze Jr.

I started thinking a lot about the Spurs’ uncanny ability to recognize untapped talent when it was reported that my beloved Toronto Raptors would be meeting with Andray Blatche in Las Vegas on Wednesday, presumably to discuss the possibility of his signing with the Raptors.

Now, as I’m writing this, I should point out that the Raptors have not yet reached a deal with Blatche, and they may never. But Blatche? Really?

It’s not that Blatche is a terrible player, he’s just kinda…plain, I guess. His numbers as a backup power forward are definitely respectable, but the Raptors already have Amir Johnson and recently came to an agreement to re-sign Patrick Patterson, both of whom are arguably better players. I suppose Blatche could play backup to Jonas Valanciunas (that’s a hole in the roster that merits filling), but I’d rather have a true centre fill that position.

In other words, if the Raptors’ ongoing free-agent negotiations were a movie, Andray Blatche would be wearing glasses and he’d have his hair in a bun. I just haven’t figured out if he’s supposed to be a schoolmarm or a babe yet. If the Spurs were making advances toward him, I’d know Blatche was a babe, but since it’s the Raptors, I’m just confused.

Maybe Raptors GM Masai Ujiri is planning some kind of trade if he signs Blatche. Amir Johnson, as much as I love him, has a pair of wonky ankles, but he’s also on an expiring contract next season and he’s an advanced-stats geek’s wet dream. Could he be on the trading block in the near future? And if so, could Blatche fill the void at power forward?

Maybe the Raptors are hoping to deal Tyler Hansbrough, another power forward. They just picked up their team option on him, but that doesn’t mean they won’t trade him as soon as the right deal comes along. Hansbrough is a scrappy defender, but he has a hell of a time scoring. If Toronto got rid of him and had Johnson, Patterson and Blatche at the power forward position, that would be a definite upgrade.

Or maybe—just maybe—I’m reading way too much into this and my Freddie Prinze Jr. analogy was beyond ridiculous.