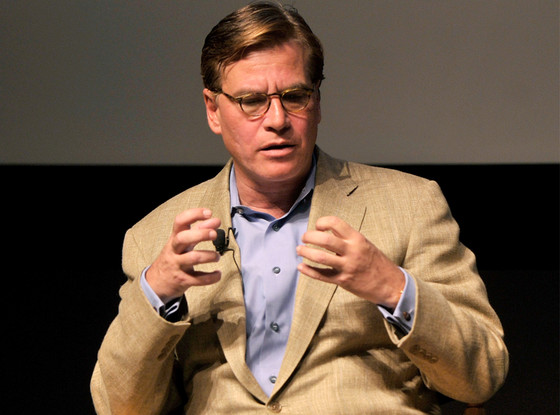 A Rant re: Creator Guilt

Back in April, Entertainment Weekly published a story about the Tribeca Film Festival. Apparently Oscar winner, Emmy winner and inspiration to writers and politicians the world over, Aaron Sorkin, took some time out of a panel he was taking part in to apologize for The Newsroom (and, it seems, for being Aaron Sorkin in general). See, back in the summer of 2012 when The Newsroom first started airing on HBO, the hate-watching contingent was huge and the internet editorial “conversation” even bigger. Over the course of many reviewcaps throughout seasons one and two, I addressed my feelings on the show and its ridiculous backlash and you can read all of those thoughts by clicking HERE. But this is bigger than my (or your, or Angry Internet Writer #472’s) feelings about The Newsroom. Sorkin’s apology brought up something that’s been bothering me for years. Since this particular incident has now been bothering me for months, I figure I’ll use it as context to air some thoughts about the way TV viewers relate to their favourite shows and the people who create them.

Read EW’s article before reading the following editorial, everything will make more sense that way.

I know I’m a critic so I’m dancing on hypocritical territory here but this drives me bananas.

The current landscape of media consumption and instant feedback gives viewers the misguided idea that the creator is working for them. And if they don’t like something, said creator should be apologetic for displeasing them. You see this most often with series finales (poor Damon Lindelof has had a tough road since 2010, a road Thomas & Bays now find themselves trudging) but viewers (honestly, not really viewers so much as pilot-watchers and internet editorial writers) have been calling for blood since The Newsroom premiered. Rather than the trophies lining Sorkin’s bookcase buying him some well-earned benefit of the doubt, they bought him a giant microscope under which he was invited to fry for writing what is very easily identifiable as a definitive contemporary Sorkin work, and nothing less. Write this show under a pseudonym, and maybe air it anywhere but HBO, and everything gets a whole lot easier.

There isn’t a single revelation (whether an acknowledgement of his weaknesses as a writer or a declaration that he really did mean well) in his “apology” that could count as news to any decent Sorkin fan, or any viewer at all who watched The Newsroom without looking for excuses to call the writer overrated (or worse). The Newsroom doesn’t have to be a hit like The West Wing was; current mainstream taste could never abide Sorkin and his anti-Breaking Bad view of the world. And that’s okay; you don’t have to like it (I didn’t much like Breaking Bad; we’ll just have to be able to live peaceably alongside each other despite such a devastating clash). But we have to stop shaming creators just because they write something we don’t like, otherwise they’re simply going to stop creating.

With every new article that comes out about Aaron Sorkin, I’m further convinced that the critics are gradually decreasing the size of his future body of work. He’s already a neurotic man, a man who wakes up every day and faces the reality that his work was best regarded when he was an active drug user and now the decision to stay clean (for himself, for his daughter) makes it harder to perform at the level he once did. He’s already a man who frets over every word he writes, who showers sometimes six times a day so he can make a new start on the scene at hand, and he’s producing less and less prolifically with every passing year. Because, now, the only thing the critics will let Aaron Sorkin get away with is perfection; anything less and he’ll be torn to pieces, attacked on a personal level. Let’s not make him more neurotic, more defensive, and even less prolific. It’s telling that one of his greatest works was the one he wrote when none of us had ever heard of him (A Few Good Men– he wrote it on cocktail napkins while bartending at a theatre in NYC). Thank god the man doesn’t have Twitter.

I understand that the characters on The Newsroom‘s quixotic self-importance can be irritating, and especially jarring in a landscape defined by anti-heroes. I understand that when a widely celebrated writer writes something not up to snuff (like awkward female characters) or flat out lazy (using recent past news stories, the occasional tired plot device) it can be tempting to think that he’s making a larger statement rather than just failing a little (Note: not knowing how to write a great woman and not thinking women can be great are two very different things). But imperfection is allowed. Sometimes imperfection is the whole point, and every decent creative mind in the world knows that. Anytime you start to forget, remember that one man wrote both Comedy of Errors and King Lear.

Let’s let creators tell the stories they have to tell. Let’s not worry so much if their point of view isn’t our own, even if their point of view makes us a little mad. Let’s stop letting finales we didn’t like undermine series that we loved. By all means, let’s comment and engage and debate our beloved texts, as long as we celebrate that they exist.