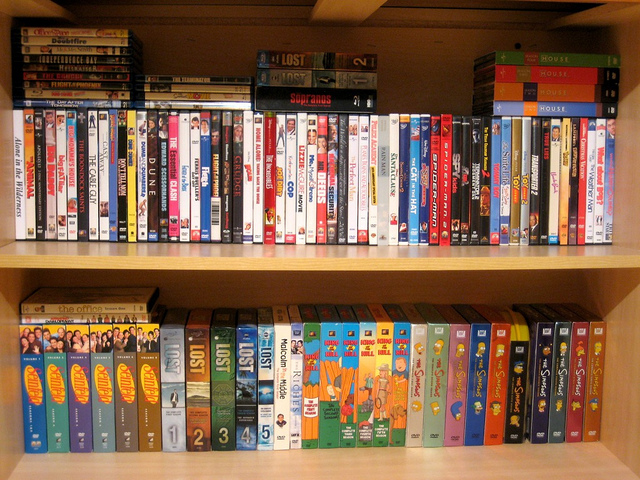 TV on DVD: Paramount in June

TV on DVD is one of my favourite things. Long before Netflix, it revolutionized the way we consume television and, for the first time ever, made it possible for a show to be remembered (or even discovered) long after it was canceled (most likely by FOX). At least half of all hardcore Whedon fans seem to have discovered him via Buffy or Firefly on DVD (myself certainly included). TV on DVD allowed me to give The OC a real shot after I’d escaped the halls of high school (hint: loved in marathon what I couldn’t stand when I tried watching each week) and my early and ongoing love of Bradley Cooper will always have Kitchen Confidential to cling to even though it was yanked off the air in only 6 episodes (13 exist, get the DVD, it’s great). My West Wing box set was a centrepiece to family time whenever I came home for Christmas holidays (still is sometimes). And when I’m down in the dumps, the antidote always comes on a disc of the world’s most reliable show- Friends.

My TV on DVD collection is massive and beloved but when I recently stopped in to the fantastic second-hand store in Toronto where I’ve always annihilated my bank account in the name of TV on DVD I noticed something temporarily awesome and long-term depressing- most boxsets (retail value around $60 once upon a time) were priced at $5. No one is buying TV on DVD anymore. Netflix has taken over so fully that the allure of owning physical copies has finally been beaten out.

But I reject that notion. I still want to see a row of pristine Grey’s Anatomy cases lining my black bookshelves where the Complete Works of Jane Austen used to be- they’re pretty and full of hours of my joy and tears. And despite your limited shelf space and impossibly cheap Netflix bill, I think deep down you want the same thing. So I’m outlining some of the upcoming titles from that old archaic DVD world, just in case you’re wondering.

The goofy, sometimes stupid, Comedy Central show starring the Pitch Perfect villain, Mindy Lahiri’s minister/DJ former fiancé, and that guy with the hair. The good news here is the Special Features which are miraculously available both on DVD and Blu-ray (because who actually buys Blu-ray?). The improv-tastic show has included a set of “Alternate Takes” on the disc so you can see what the second best version (or the first best but “inappropriate for TV” version) was of your favourite scenes. I also always appreciate a commitment to my favourite special feature- the audio commentary- and these guys went all-out, recording for every single episode. Also: “Drunkmentary”, self explanatory.

I’ll let Matt tell you all about Ray Donovan‘s tumultuous first season on Showtime because he put a lot of thought into his recaps. Meanwhile, I’ll complain that this DVD is criminally empty. There isn’t a thing on it other than, you know, Ray Donovan season one. It’s the one big serious cable drama release in this group (theoretically the cast and creators have something to say about it) but unless you’re just a Really big fan of the show (which, as far as I can tell, no one really is) this over-priced set is totally miss-able. That said, it is the Sort of thing one should be buying on DVD (if the show was better and the DVD WAY better).

I was curious, that’s really the only reason I watched this. It’s a well-produced special and he’s a decently charming performer but Sinbad just doesn’t have the writing chops to really make a standup splash anymore. Comedy specials really are, I think, the definitive Netflix property- perfect for spontaneous 2am viewing and an excellent source of taste-defining info for the website’s eerie recommendation algorithm (good call on Moshe Kasher, Netflix; well done). They also are the sort of thing you want to watch once but likely never need to see again. Netflix is perfect for things you want to watch once. You buy a DVD because it will be yours and you can watch it forever (the aforementioned West Wing box set is so well-loved and over-watched that it’s literally held together with tape). Who wants to own a Sinbad special?

Daniel Tosh’s recent DVD release gave me the same feeling as Sinbad’s- why would anyone want to own this? Watch the occasional tosh.0 ep to make yourself feel better about your own inadequacies? Sure. But own it? At least Tosh serves up some Special Features, albeit lame sparse ones, and is awfully pretty to look at. But this is purely one-time viewing, partly because it’s not good enough to watch over and over but mostly because, by very definition, tosh.0 is timely. The point of choosing DVD over streaming is to own something that you will always enjoy (or at least enjoy a couple of times), so scripted is really where it’s at (unless we’re talking about, like, a really great season of Survivor. I would love Fans vs. Favourites on DVD).

Now TNG, that’s a quintessential DVD show. It’s got the intellect and emotional depth that encourages repeat viewings and the addictive quality that prompts binge-watching. Everyone I know who is a big TNG fan (and there are many) discovered the show on DVD after the fact. Luckily, Paramount knows who they’re dealing with when it comes to Trekkies, smartly packing each DVD with hearty extras and access. However, because they’re a giant corporation that knows who they’re dealing with when it comes to Trekkies, they distribute all their Trek DVDs very strangely (or smartly, I guess, because they’re in the business of making money). TNG doesn’t just have season by season box sets, it has special editions and specific packages and bundles of character-specific episodes and all sorts of repetitive, confusing nonsense meant to trick consumers into buying the same thing multiple times. Here they’ve released an entirely separate Blu-ray for the famous two-parter “Chain of Command” in addition to the also recently released sixth season. On one hand, if you’re just really into “Chain of Command”, you can save yourself more than a hundred bucks by just buying the one episode (well, two episodes put together to create a makeshift movie) instead of the wildly priced full sixth season. But that doesn’t really feel like a Star Trek fan thing to do. Either they’re watching things nonchalantly online because DVDs are archaic and they’re too “advanced” for such things, or they own every single release ever and have watched them all (plus extras) multiple times. “Chain of Command” is great, but I’d much rather have season six (context!).

Full disclosure: I’m not really a big fan of Unforgettable. I find Poppy Montgomery annoying and it’s just too procedural for my taste. However, I am all for the existence of Unforgettable. It’s one of the only great resurrection stories in recent broadcast history, brought back by CBS as a summer 13-episode series when it failed as a regular season full series. On one hand, I like when a network is able to admit they were wrong and show a little flexibility and patience. But I also just really like that they’re finally committing to cable-length runs and “off-season” scripted fare. It’s not a really great show but it’s flipping cool that Unforgettable made it to a second season, let alone its impending third. If you like procedurals- especially the “protagonist with special skills” brand of procedural like The Mentalist– Unforgettable is worth your time. And there are special features, so that’s good (but no audio commentary, which, I mean, come on!).