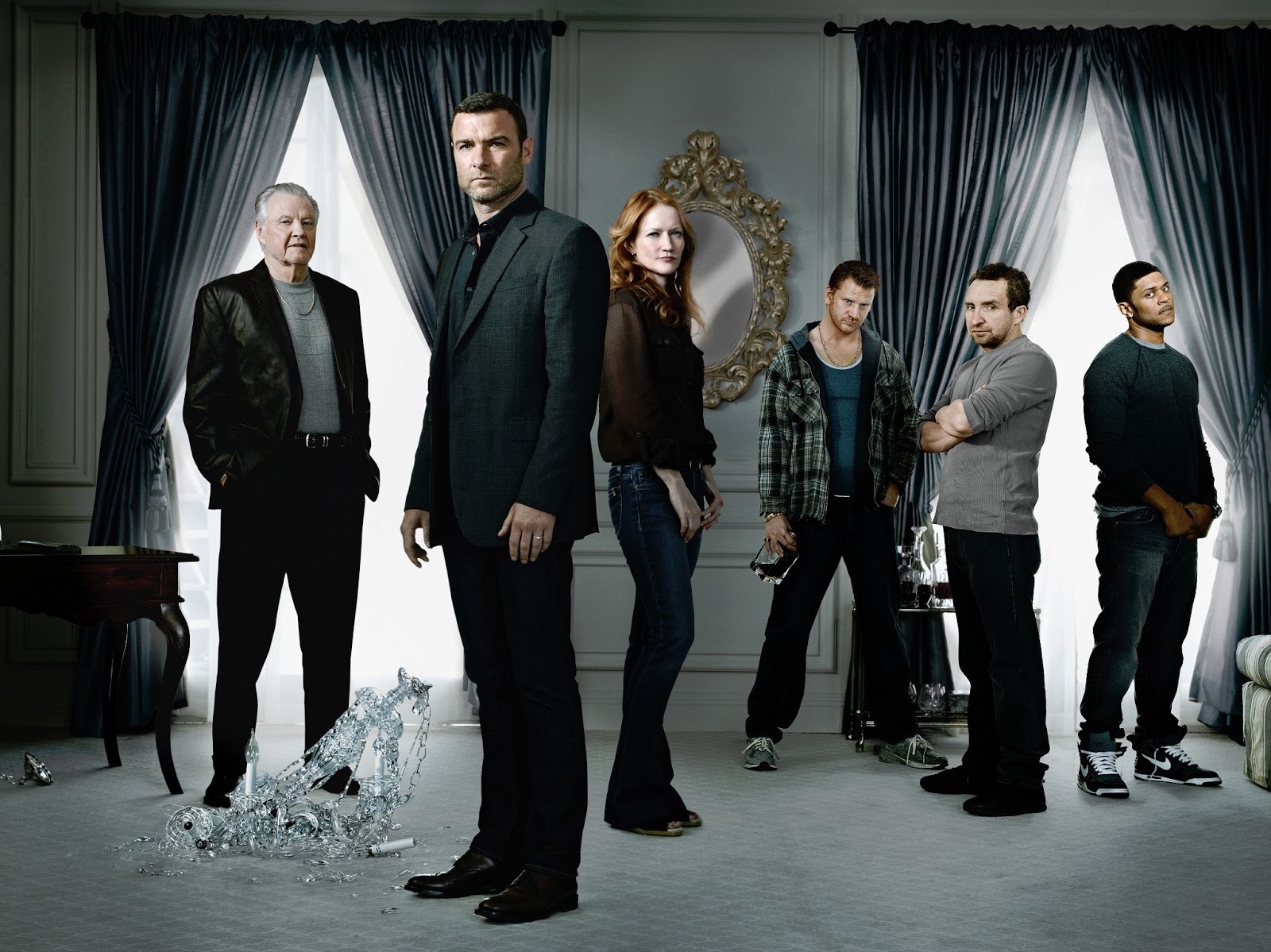 After twelve episodes of intense stare downs, illegal acts of every kind, and the broadest BAH-ston accents outside of an Affleck film, Ray Donovan has reached the end of its first season. It was an interesting journey leading to the finale, and the show did not always feel like it had the clearest grasp of where it was headed, but something about this drama kept the Donovan family to compelling till the very end.

The finale picks up right where the previous episode ended, with Ray’s carefully detailed plan gone straight to Hell. Mickey is still alive, Sully has stolen millions of dollars, Ray’s friend is dead, and the other Donovans are still dealing with the dead priest. Yes you read, that right, they killed a priest. Not just any priest, however, but the one who abused Bunchy and, in a reveal that’s actually surprising, a young Ray as well. The brothers quickly dispose of the body, leaving Ray to deal with an on-the-run Sully. James Woods has portrayed this character as a chillingly unmerciful killer, and now Sully is little more than a trapped animal, making him even more dangerous. The climax of the episode features a good old fashion Mexican Standoff between Sully, Ray, Mickey, and their various henchmen. Bullets fly, loose ends are tied up, and a bloody Ray returns to the safety of his family, ready to start the second season.

From the pilot to the finale, Jon Voight and his portrayal of Mickey Donovan has been the most powerful force on the show. Despite his limited screen time, Mickey has been a cancer for the Donovan family from the moment he was released from prison. His actions, and in many cases just his implied presence, is enough to taint the lives of all of his children. Mickey’s arc over the course of the season has been essentially the gradual destruction of a pop culture stereotype. Mickey clearly views himself as an old noble gangster, a Godfather-meets-Jack-Nicolson-in-The-Departed sort of self-image. He thinks he should be loved, feared, and respected in equal measure. Over the season, it becomes clear that this is just a fantasy in Mickey’s head, when in truth he is really just a creepy old man with delusions of grandeur and control over desperate people. One of the best things about Mickey is his wardrobe, which is straight out of Miami Vice. No one ever talks about it, but it’s part of Mickey’s unbreakable attachment to the past. One of the season’s most outstanding scenes featured Mickey shedding his typical outfit, de-slicking his hair, and donning a pair of old man glasses. He is shedding the fantasy and accepting reality. Perhaps Mickey’s biggest delusion is his sincere belief that he is a good father, despite all of the evidence to the contrary. During the final episode’s standoff, Mickey has to make a choice between escaping with Sully or helping Ray, and he chooses to aid his son. The season ends with Mickey attempting to remain part of his children’s lives, not by imposing himself on them, but getting them to accept him on their own terms. Mickey truly believes he can be a good father; it’s the last delusion he has left.

The other Donovan brothers experience a fair amount of resolution to their stories in the finale. Bunchy finally stands up to his father, and regains some level of confidence and self-worth. There are hints that with death of the priest Bunchy actually has some measure of closure, and while the effects his horrific abuse while never completely go away, his present life might not be entirely defined by it. Terry Donovan has the most complete character arc of anyone on the show, over the course of the season. At the start, he felt weak and broken. As a man once defined by his physical prowess, the trauma from boxing had robbed him of everything he built his identity around. His relationship with his nurse Francis, finally showed Terry that people could view him as someone important outside of boxing. He becomes more confident in himself as the season progresses, to the point when Ray threatens to shoot Mickey in front their entire family, it’s Terry who takes control of the situation. Despite the fact that Terry and Francis’ relationship doesn’t last the season, Terry is clearly not the same anymore and has grown and expanded beyond the role he thought he was stuck in

Ray’s own family, on the other hand, does not get any of the same development or progression that the Donovan brothers receive. His daughter Bridgette receives a large storyline, in familiar “girl dates a boy her parent said not to” vein. It was meant to illustrate the danger of Ray’s personal and professional lives mixing, but really just serves as an excuse for Ray to act tough in the face a whiney teenager. Son Conor smashes a kids head with a rock, and spends one episode essentially forcing Ray and one of his clients to act as the male role models his desperately seeks. The seeming absence of paternal figures, and his general habit to distrust authority figures hints at deep similarities between Conor and his father, but nothing ever comes of it. Perhaps the greatest shortcoming of the first season is the character of Ray wife, Abby. She is basically a stereotypical wife-of-an-antihero, cut from the same cloth as Carmella Soprano and Skyler White, but without any of the depth or nuance. This does not mean that actress Paula Malcomson gives a bad performance, but the story just doesn’t give her that much to do. She spends the season wandering around with no clear goal or character arc. By the third time Abby announces that she has no idea who her husband really is, the audience is barely inclined to feel anything for her anymore. All the storylines involving Ray’s family fade away by the last three to four episodes of the season, and their role in the finale basically amounts to rejecting Mickey and embracing a literally bloody Ray back into their lives.

It is extremely hard to judge Ray Donovan as series, even with the season complete. There are fundamental aspects of the show that are not good, and there are some serious execution problems. The first couple episodes aim to address the duality of Ray family life with career has a Hollywood fixer, balancing the long term Donovan drama with self-contained LA adventures. This structure quickly goes out the window, and the season lurches, stalls, and jumps around various plot points, without any clear sense of momentum. At times it feels as though Ray Donovan was originally conceived as a film and then hurriedly stretched out into a television series. Characters and plots are introduced seemingly with some pay off in mind (remember Donovan half-brother Pooch?) but then go away at a seconds notice. The FBI sub-plot, which is the main thrust of several episodes, is wrapped in one way too convenient moment.

The good parts of Ray Donovan, however, are really good, and specially the performances. Every actor on this show does a great job, despite the occasionally slip with their BAH-ston voice, and the shortcomings are mainly due to a lack of character development. Liev Schreiber was born to play a brooding antihero. He is blunt, violent, and physically threating, and in his few moments of openness, Schreiber is such a good actor that he able to convey everything that the audience needs to know about Ray. The revelation of his own abuse is built up by Schreiber’s excellent performance of a man made numb by decades of suppressed rage and paternal hatred. Eddie Marsan and Dash Mihok make Terry and Bunchy into the two most likeable characters in the whole show. It is impossible not to root for either of them as they deal with an almost psychotic brother and father. As mentioned in the pilot review, if Ray Donovan were a film, Jon Voight would get a Best Supporting Actor nomination at the very least. In his hands, Mickey is equal parts sympathetic and repugnant, and shows the slow fall of a man from fiction to fact. A late season assist from James Woods and the vile and ruthless Sully further adds to the impressive acting credentials on the show.

Ray Donovan started and ended the season very strong, but was on very flimsy ground at various points in between. If the show is to continue for years to come, there are essential issues around the structure and the development of the supporting cast that must be addressed. A second season has already been announced, but it’s hard to imagine exactly what form it will take. Will there be a further integration of Ray’s private and business life? And what exactly will Mickey do now that the central threat that he posed has been removed? Despite all its flaws, the good parts of Ray Donovan make up for its more questionable moments. This show has incredible potential, with a cast and crew that have proven to be capable of delivering excellent work, which will likely be enough to convince the audience to return for another season of Donovan drama. Ray Donovan is not a perfect show, but it is compelling television.

Finale Grade: B+
Season Grade: B- (C without the excellent cast)