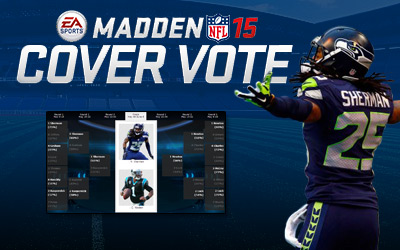 Did Richard Sherman really win the fans’ support to be on the cover of ‘Madden NFL 15’ because they felt he deserved to win, or because they hoped he would be affected by the Madden Curse? Whether you believe in curses or not, you have to really understand how players in the past have performed before and after their Madden photo shoot. Typically, based on the season prior to the game’s next release, the players chosen to be selected for the cover are coming off a great year with a number of achievements and accomplishments. This year is no different in that regard, and while I do believe Sherman had a great year, he wasn’t the league MVP for a reason. That is why I want to pry deeper into the mystery of why the public voted for Sherman: a player that had a lot of negative publicity after he called Michael Crabtree out after the Seahawks’ win in the NFC Championship game of the 2013-2014 season.

Sherman did a lot more good than bad during a season that culminated in a Super Bowl victory for the first time in franchise history, however. Not only did he not allow a single touchdown all season, but Sherman had eight interceptions and forty-eight combined tackles. He also had a huge hand in Seattle’s victory in the NFC Championship game after batting the ball for an interception to his teammate as the 49ers were about to score. Believed by many football fans to be the best corner in the league, Sherman definitely has his supporters. Did they exceed his haters, though?

It might be worth noting that the Madden cover has been a coveted award for well over twenty years, even though John Madden himself has opposed showcasing a player on its cover. This may be partly why the whole Madden Curse was even thought up. With John’s disapproval and the natural regression that is expected after a player has a stellar year, fans around the world began to notice when the game’s cover athletes started getting injured or began disappearing into the shadows soon after their award of posing for the cover. The list of cover athletes and their performances afterward is very extensive and can be abundantly found online, but some of the biggest curses belong to players such as Peyton Hillis, Eddie George, Marshall Faulk, and Troy Polamalu. It’s also worth noting that Calvin Johnson is the single player to not have a decline of any sort after being on the Madden cover and actually went on to break Jerry Rice’s single-season receiving record. He did this with broken fingers however, so maybe he was cursed with an injury after all, and was just such a beast that he still crushed a feat that has long been one of the toughest records to surpass.

Everyone has heard about the dreaded Madden Curse, but do people actually believe in it? Does it help them determine whether or not they want their favorite player to win or lose? Take LaDainian Tomlinson, for example. EA was interested in featuring Tomlinson on the cover of ‘Madden NFL 08,’ but his fans didn’t approve. His fans created SaveLTfromMadden.com as a place to voice disapproval for those opposed to letting LT suffer from the affliction known as the curse, by appearing on Madden. Eventually he turned EA down, citing a failure during contract negotiations.

Since EA changed how the cover athlete is chosen, NFL fans are given the option to vote in a tournament style elimination bracket each year. The fans can either vote for their favorite player to win or they can vote against that player to save them from the curse. Do fans really believe so strongly in the curse that they would vote for whoever is facing their favorite player? Would they possibly vote for a player they heard about negatively in the media just to be try to get him cursed? We’ll never know why each and every person voted how they did, but it’s a debate that can be held every year until the Madden Curse is finally debunked.

Enough about the curse, though. The short and sweet: Did Sherman win because everybody thinks he had the best season out of the players they could vote for, or did he win because the fans hate him and want to see him cursed? There is one more option though. Maybe he won because the two most deserving players of the year weren’t on the board for the fans to vote for. I think there are two players that stand out miles above Sherman, Newton, or any other player this past season.

An upcoming profile of my favourite athlete may lead you to believe that Tom Brady is one of those names because I’m biased, but you’re wrong. I’m not biased here, but he is one of the two I feel deserved to at least be on the voting board. Did Tom have his best season statistically? Not by a long shot. Did he have a season rivaling Peyton’s record crushing achievements even though he suffered at moments and his team never appeared good enough to be in the AFC Championship game last year? Definitely. Brady had a rookie receiving core that was riddled with injuries while Gronk was out for most of the season, again. His top receiver last year was Julian Edelman, who is a great player, but falls far short of some of Tom’s past weapons. Despite this, he had an amazing season. His team fell apart against Peyton’s almighty Broncos, but he had accomplished something stats don’t show. Tom Brady was the leader he has always shown he was, and helped his fledgling team achieve greatness with his command of the game and his will to improve and improve those around him. If that doesn’t get him consideration on getting voted on for the cover, can someone at least give the guy a high-five?

Peyton. Manning. It doesn’t matter which name you call him; everybody knows who you’re talking about. Arguably the best quarterback to ever touch a pigskin, he is the player that everyone strives to be like. Peyton has been an amazing leader and quarterback since his early years in Indianapolis, but this previous season was his best ever. Manning broke Brady’s single season touchdown record, broke the league record for passing yards in a season with 5,477, and even tied the record for second most completions with 450. After the 2013-2014 football season, Peyton Manning and Tom Brady sit as the only two quarterbacks to ever have two or more seasons with a qb rating of 110.0 or higher. We all know how Peyton’s amazing season came crashing down to a horrible ending, but he still added to his legacy and had a season well worth remembering, even if that is done by letting him be in the running for the ‘Madden NFL’ cover.

What do you think? Did the fans get it right? Do you think they voted for Sherman because he had an amazing year and was on the Seattle Seahawks during their Super Bowl trophy win? Or did they vote for him so he can get cursed and have a bad year? Maybe some 49er fans want a little less competition for the NFC title this year. Do you think Tom or Peyton should have at least been on the selection board for voting or do you think keeping them off the cover of Madden is a service to real American Football fans? Sometimes the most deserving player for an award in someone’s eyes is the exact opposite in another’s.