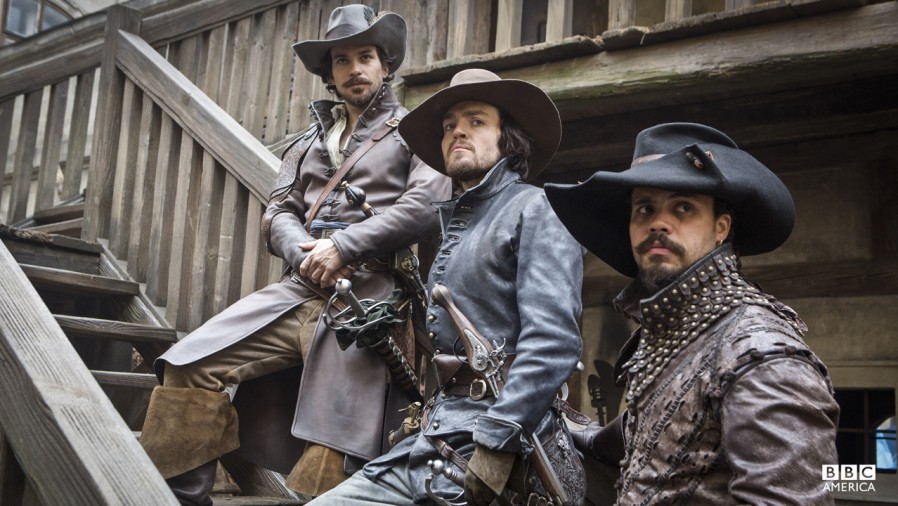 The BBC has a long history of its ‘family drama’ series. These series are shows that are meant to entertain the entire family. Doctor Who is the most famous and successful of these. There was also Robin Hood, which despite its faults gave us a brooding Richard Armitage clad in black leather and guyliner. There was Merlin, which started off promising and had a lot of potential. And now there’s The Musketeers.

These family dramas should belong to their own sub-genre. They’re adventurous, but not too dark or scary for any kids watching. And they’re campy. Oh good Lord, are they campy. You can either embrace BBC’s family dramas and their unique tone, or you can turn and run in the opposite direction. I happen to love the family dramas. They’re earnest and they’re cheesy, and they’re fun. I don’t need every show I watch to challenge me. In an age where the TV landscape is gray and populated with anti-heroes and moral conundrums, sometimes you need some good old-fashioned, swash-bucking action that you can just relax and enjoy. Which is what writer Adrian Hodge set out to do with The Musketeers.

Is it perfect? Absolutely not. The pilot was slightly predictable at points, and there were anachronisms abound. And the legal system made very little sense. The key to enjoying the BBC family drama is embracing them and just running with them. Sometimes that involves overlooking certain kinds of errors like having some dialogue that belongs closer to the twenty first century than the seventeenth.

Other criticisms are harder to go with. The biggest problem is the characters, originally imagined by Alexandre Dumas in his classic book, fail to come to life. Instead of D’Artagnan being a punk from Gascony who goes to Paris to prove himself, he comes to avenge his father who died tragically in his arms. It seems an unnecessary change; the dead father figure is such a cliché start to a hero story. The original book was great because it tracked D’Artagnan’s journey from being arrogant and feeling entitled to a spot in the Musketeers to becoming humble and actually earning his position. Not to mention in the show, Athos is doing enough moody staring into fireplaces for everybody. And now Aramis’s girlfriend has been murdered, so he might join in. When I turned on my TV, I thought I was signing up for a buddy romp with swords, not a group of friends having an angst-off.

The main characters feel like caricatures at this point. D’Artagnan is the hero with the tragic backstory. Athos is the guy with the ‘mysterious’ tragic past. Aramis is the charming one. Porthos is the jokester. The Cardinal (played with relish by Peter Capaldi) is evil mastermind. Milady is the evil temptress. There doesn’t feel like there’s any depth to them.

To be fair, there was a lot of plot jammed into the pilot episode. I’m willing to give it another episode or two to see if there is any character expansion. Partially because taking The Three Musketeers and turning it into a serial is such a good idea for a TV show. The way the relationship between the titular musketeers and D’Artagnan develops as they go on crazy adventures together seems like something that could easily be a really good show. I’m also a fan of Peter Capaldi, and despite the fact that Cardinal Richelieu seems evil for the sake of being evil, I have faith in Capaldi as an actor. (To get a good sense of his range, watch him in The Thick of It and then watch him in the second season of The Hour). The rest of the cast is for the most part charming and has a good rapport.

Also promising: The Musketeers’ pilot feels slightly darker than those of other BBC family dramas. If that is indicative of the tone for the rest of the season, then maybe it means the show will take itself more seriously, which won’t necessarily be a bad thing. As much as I enjoy other BBC family dramas, sometimes character development was sacrificed in favor of hijinks and shows that were good never made it to great. It’s still too early to tell how The Musketeers will turn out. For now, I’m just going to enjoy it as a fun distraction and hope to be pleasantly surprised.