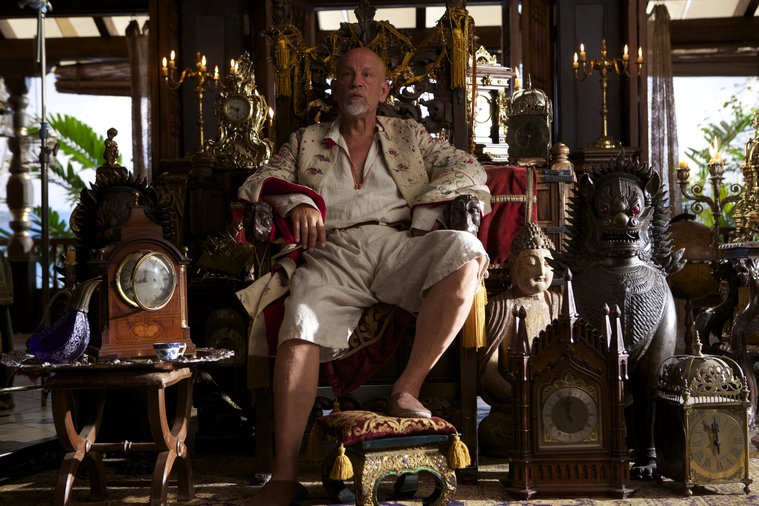 Despite a compelling performance by its leading actors, NBC’s new pirate drama Crossbones never quite manages to take off. On the surface, it seems like a show I should really like. It’s a period drama. It’s about pirates. It has John Malkovich.  And yet, despite having all the right ingredients, Crossbones falls flat.

John Malkovich stars as Blackbeard, and opposite him is Richard Coyle as Tom Lowe, a man sent to kill him. They’re both clever men who are mysterious and vicious and the biggest problem is I just don’t care about either of them. As one character observed, they’re two sharks circling each other. It’s fine to have one enigmatic alpha male as your lead, but there wasn’t any effort put into making either Lowe or Blackbeard particularly sympathetic. It seems like Blackbeard is going to have some kind of backstory that will be explained at a later time that will try to shed light on a different side to him. There are also moments that show he is a well-educated, worldly man. But these are just glimpses of a more complicated man that get lost underneath all his menacing.

So if Blackbeard has to be the menacing antagonist for now, it would seem Lowe should be made the relatable character. But he’s not. He keeps his cards incredibly close to his chest, so all we really know about him is he will do anything to fulfill his duty to the Crown. Maybe there’s more to him, maybe there’s not. And that would be fine. As would Blackbeard’s portrayal. But if you put them together, you have two very similar personalities prowling around, waiting to pounce on the other. Malkovich is intimidating and mesmerizing as Blackbeard and Coyle is intriguing as Lowe, so their scenes together are entertaining enough to watch. It’s just hard to be particularly invested in the outcome when I don’t know who either of them are, or why I should root for them.

Chris Perfetti ‘s Fletch and Claire Foy’s Kate were really the only two characters who I was able to care about. Although in the case of Fletch, it might be a bad emotional investment, because he is innocent, and innocent characters tend not to do well in piratey environments. But both Fletch and Kate were supporting character, so being invested in them isn’t enough to tide me over until we get more background information on the two leads.

If the characters are lacking, you would think that since this is a show about pirates that it would be exciting enough to keep one’s interest. You would be wrong. There was a fight scene at the beginning when the pirates boarded a British ship. And it was boring. I don’t know how a fight scene when vicious pirates board another vessel that is putting up a last stand can be boring, but it was. Have I watched too many fight sequences and am now desensitized? No. It doesn’t take much to make me squeal in horror and watch a violent scene through my fingers, but in Crossbones, I was just watching the time, wondering how much longer I had to sit through it. If the show wants to have two mysterious leads, it needs to provide something distracting to keep the audience entertained while we wait for their stories to unfold. Crossbones was really lacking in that area.

Crossbones has the potential to be a good show. It has a strong cast and an interesting premise. It feels like it’s taking its time with building its characters and the story up. But with only a ten episode long season, it might not have that luxury.