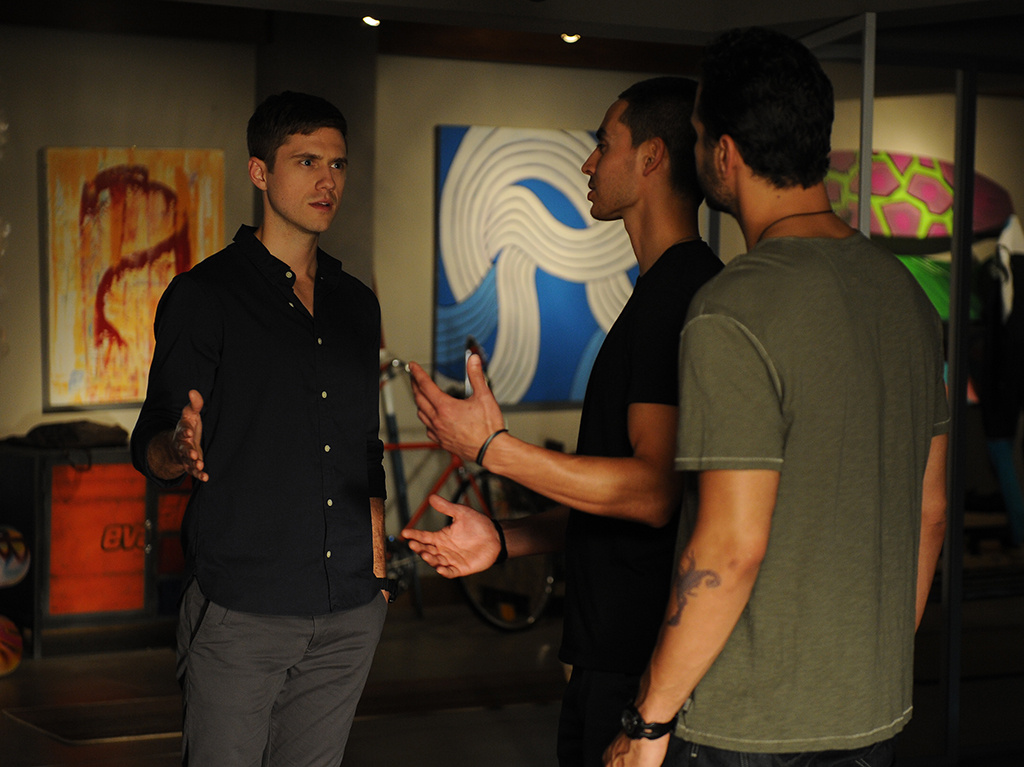 Summer is finally here! Okay, maybe not officially until June 21, but since I base my calendar on TV seasons and not science, and Graceland, a quintessential summer show just kicked off its second season: it’s now summer.

What makes Graceland a quintessential summer show? Well, it takes place in southern California, with plenty of shots of the beach and clear sunny skies. And in a world of summer blockbuster movies, having a fast pace and action also seem like summer musts. Check and check. Finally, Graceland is something that’s easy to digest as a viewer. That’s not to say that it’s simplistic or dumbed down. But the way the multiple plot lines and character arcs are presented is done in a way that it’s easy and enjoyable to watch in an initial viewing, but still leaves you something to chew on for the rest of the week.

That was my experience with the first season. The second season might have fewer beach outings than before, but is still incredibly entertaining, and answered a lot of questions/concerns I had with season one’s finale ‘Pawn’. My biggest problem in ‘Pawn’ was after all the housemates were at each other’s throats, how were they suddenly friends again. One of my pet peeves in TV shows is how a lot of times characters or their relationships don’t suffer consequences of events they experience or choices they make.

It’s hard to tell this early in the season, but from various cast interviews, and what we saw in ‘The Line’, it seems like the relationships between the characters have cracks in them. It’s most obvious with Mike, who is an outsider again. Part of this is his fault for pulling rank on his former housemates to help realize his own ambitions. But another part of it is because of his investigation of Briggs last season and the subsequent recognition he received. Now some of the characters are resentful or don’t trust him, which is less fair. The emotional part of me just wants everyone to be friends again, but the more analytical part of me is thrilled this is something that is being addressed.

The other big question I had after ‘Pawn’ was how they were going to bring Mike back, since he got his dream job in DC. The answer: take the dead end theory Mike was chasing in DC and give him a lead in Graceland. Suddenly he’s leading the team where he was formerly the newbie, and things got a lot more interesting. There wasn’t a lot of time to spend with each character and see how they feel about this development other than they’re not thrilled. The first episode was mostly about Mike’s evolution from the successful, happy FBI agent in ‘Pawn’ to the slightly disillusioned ambitious man in ‘The Line’. It’s an interesting path that will be exciting to explore. Hopefully as the weeks progress, we’ll also get to spend time with the rest of the team and track their arcs too.

The show also brought some plot related elements from season 1, which turned out to be a red herring. Initially, Mike returned because he thought the Caza cartel, the ominous but unseen big bad from season 1 was after him. While it turned out to be a different so far unnamed organization, Caza will probably somehow be tied in. The show is really good at juggling a lot of different elements, throwing curveballs, and somehow bringing everything back together in a way that is both surprising yet makes sense. No matter what happens, there will probably be more violence and torture, and tension between the housemates.

But it’s not all doom and gloom. Thanks to the previously mentioned scenery shots, you can comfort yourself with knowing that while yes, the team might have severe trust issues, and yes, there are a lot of scary organizations out to torture and kill them, at least the weather is nice. Happy summer.