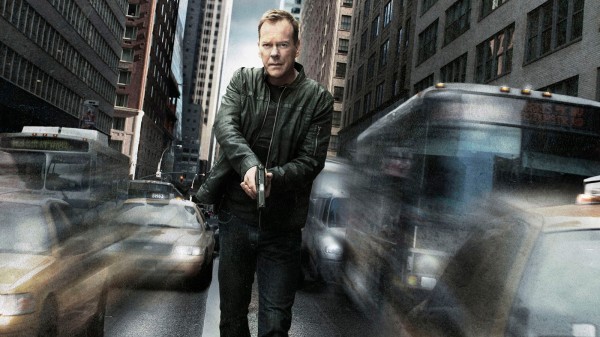 The Night Jack Came Back

My buddy would be staying the night. We had been drinking wine, unapologetically mixing our reds and whites; I’m nothing if not a responsible substance abuser and living in Los Angeles, a city of automotive hedonism, can only compound that adherence towards safe driving. So, we sprawled along our separate ends of my L-shaped couch and loaded up the Hulu, mumbling through our options of distraction. Then there he was: mouth agape, gun unholstered and pointed aggressively, Great Britain exploding in the background, and the number “24” blasted yellow upon the screen.

There’s probably no more appropriate scripted show for a drunk than 24. Alcohol allows us to tap deep into that mob mentality, greasing the wheels for sports fanaticism and O.G. tea-party patriotism alike. Of course, the mana that pulses at the heart of the show is something that can best described as fanatic patriotism. Whatever side Jack stands on will be the right side, rest assured, and we’re all free to hoot and holler “America” without any worry of moral intricacies. In the wake of 9/11 – the show premiered in November 2001 – Jack Bauer was superimposed over the statue of liberty as our most simplistic symbol of American integrity.

We all went a little bloodlust nuts in those days, and Jack arrived at the perfect time to lead our collective journey, straddling carpet bombs and waving our cowboy hats as we descended upon mostly unsuspecting middle easterners.

By this point, nearly thirteen years since the show’s premier, we’re very much familiar with the mental perils of this fiction. There’s several humorous/frightening anecdotes left behind from those days with national defense reality imitating national defense art. My unconfirmed favorite is how May Lynn Rajskub, who plays Jack’s right-hand techie woman Chloe, was asked by congress her opinions on national security. It’s a believable rumor, as is the idea that the mirage of W.M.D.s might’ve been influenced by the stakes inherit in 24. The lines were so very blurred between our utmost terrorist paranoia and the show’s reality.

24 gradually lost buzz as our rage fever broke and an era of mell-O-bama was ushered in. It’s been four years since “Day 8” of the series, and both my friend and I are eager to reacquaint with the scraggily voiced alpha Jack Bauer; it feels like we’re seeing our favorite off-the-grid uncle. His eyes may be shifty, and he may believe Y2K is still around the corner, but boy does he make the best hooch.

Jack remains on the run from his own government but is quickly discovered in London, where he gets the chance to beat on CTU operatives until he’s captured and brought in for questioning. Of course, we learn with the help of new character Kate Morgan, played by Yvonne Strahovski, that Jack meant to get captured. Indeed, he gets free nearly at will, and goes on to rescue his platonic lady mate Chloe who had been held and tortured in the same facility.

They escape and head back to her new base of operations, which is a wonderfully bizarro version of Wikileaks, complete with a smug British take on Julian Assange. Jack doesn’t like the cut of his jib but he needs his help, since it would appear one of their former employees has turned terrorist and is now apprehending American drones for his own nefarious purposes. It’s a bit confounding to see Jack Bauer teaming up with Wikileaks since he, as a symbol of American righteousness, couldn’t be more out of place than next to a bunch of condescending Euro-hackers. In hindsight, however, it’s a pretty inspired alliance: Jack and Julian teaming up for freedom.

The method in which this season bends current events and reverses history optimizes its highest-stakes-possible mantra. For instance, instead of Obama, we have a President Heller depicting that unique John McCain vibe, complete with a variation on “straight talk”. Of course, Heller reveals to his daughter a newly diagnosed case of Alzheimer’s. Before he can surrender his office, though, Heller is determined to negotiate a new defense treaty with the Brits. Thus far, this is my favorite story thread, and could easily have been a prestige piece of fiction had it not been set in the world of 24, in which the realistic drama (Late edition Reagan anyone?) is superseded by a ludicrous assassination-by-drone plot.

Finally, after two hours of emptying wine bottles and cheering on Jack as he clobbers and slices his way with shocking network TV brutality towards the runaway Wiki-ass, we’re granted the reveal of a secret puppet master: it’s the actress formerly known as Catelyn Stark! We don’t know who she is or what she wants, but we do appreciate the showrunner’s understanding of overlapping demographics with Game of Thrones.

I’m left excited for the next installment of this season, even though I mostly lost interest following the show’s first few seasons. After four years, it feels both fresh and throwback. Kiefer is geared and ready, at the top of his scowling game. There’s so much mess to get to the bottom of here, so grab your hooch and grab your cowboy hat; we’re going to straddle these drones on our way to mutually assured destruction.