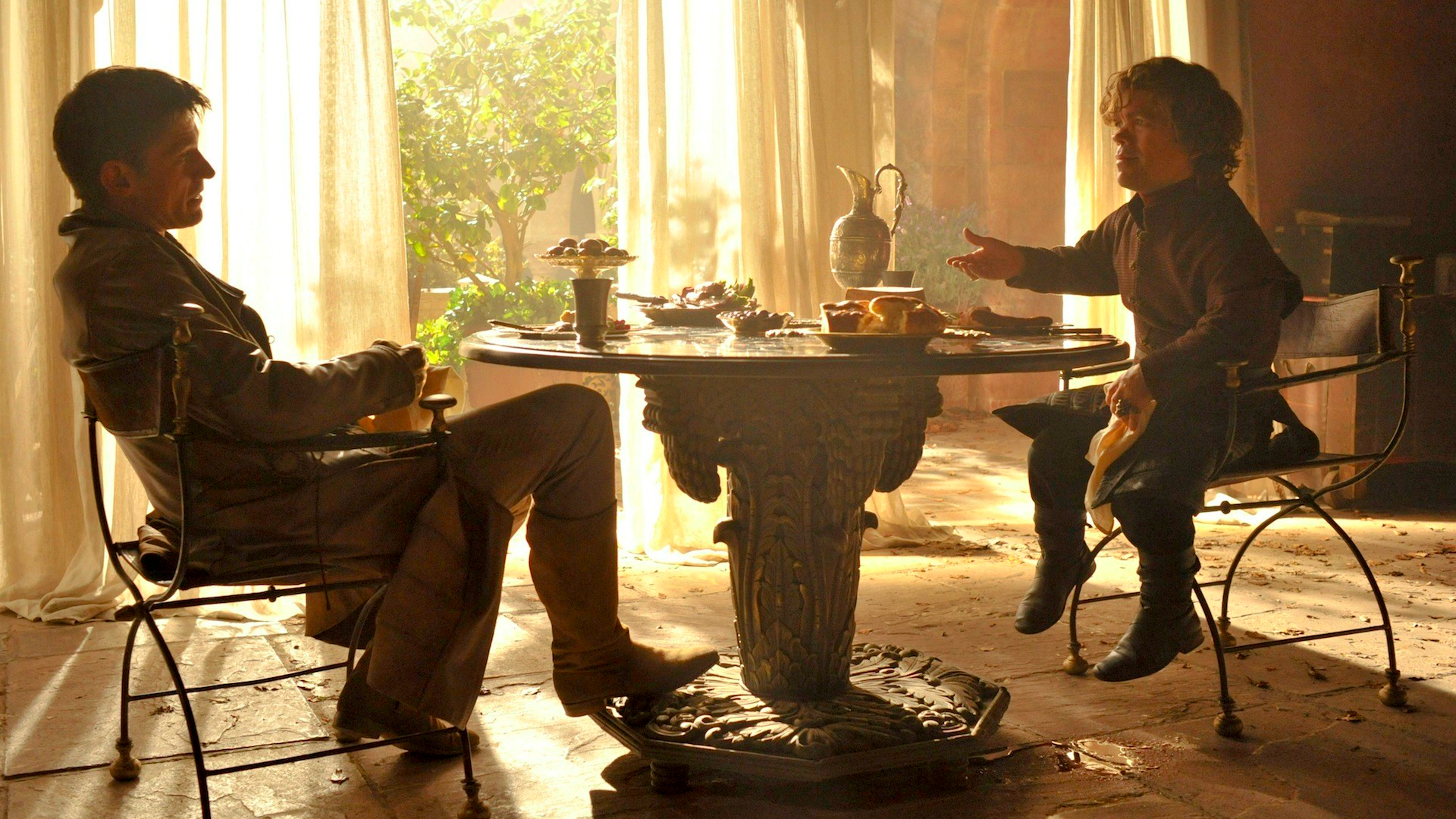 Game of Thrones: The Lion and the Rose

A lot of coverage of last night’s episode of Game of Thrones (and a very necessary SPOILER ALERT just in case you haven’t watched it) is going to focus on that ending. There will be a lot of punning about why men should be very afraid to get married in the world of Westeros. There will be much rejoicing at the gruesome way a deeply-hated character met his end. There will be a lot of missing the forest for the very bloody tree.

But not here*. Here we will focus on the other fascinating moments in last night’s episode. Like that tantalizing look at Melisandre (now bumped up to my second most hated person in Westeros). Or the heartbreaking look on Brienne’s face when Cersei tore her and her unrequited (?) love for Jamie Lannister down.  Or Oberyn Martell totally justifying his ridiculous intro last week by just owning every inch of Cersei and Tywin-freaking-Lannister this week.

The most significant part of the episode isn’t just the death at the end. It’s the way it comes about. It’s the way Margaery Tyrell is now so in control of the situation that Cersei Lannister has been relegated to pathetic squealing against the oncoming tide. It’s Cersei’s slow realization (which yes, culminates in that episode ending howel) of just how unimportant she is now. It’s Jamie’s struggles to make himself important, now that he’s not the surest of hand. And it is most definitely the way Tyrion refuses to stay quiet while his wife is humiliated.

I can’t speak too much to what was going on with Bran (we barely got a glimpse of it), but for those so inclined, I can guarantee you there’s hints galore in his little tree-induced fantasy. And Theon continues to just be the most pathetic man in Westeros, this week confirming just how low he’s sunk since last season’s torture. There’s trouble brewing on both fronts, but we haven’t seen enough yet to really know where we’re going.

What we’ve seen thus far tells us that, post-Red Wedding, Westeros is adrift. “Peace” is the watchword, but it’s as fragile as a poisoned wine glass. Power is all that matters in the game of thrones, and we’ve seen time and time again how ephemeral power is.

George R. R. Martin stepped up to the screenwriting plate for this weeks episode, and I’m sure it had a lot to do with correctly parsing that ending. But the side effect is that is we got to see the clearest distillation of Martin’s favorite themes. With many people wondering just how GOT can top last season, and how it can continue to move forward now that what seemed like the driving force is gone, this episode is your answer. The driving force was never the Starks (but as House Bolton learned this week, they’re definitely still around and kicking). The driving force is power, and the desperate, yearning grasp for it.

The clearest, most-heartbreaking scene for this argument, then, isn’t Joffrey’s assassination. It’s Tyrion realizing how powerless he is, and that the only thing he can possibly do is drive away the woman he loves. It’s not hit as hard in the show as it is in the books, but for Tyrion true affection always seemed an impossible dream. For all his maneuvering, he was always going to be the loveless imp. So to force away the one woman who seemed to, unapologetically and completely, adore him is the most direct manifestation of Martin’s thesis: there’s only one ending in Westeros for all of our characters, and it sure as hell isn’t a happy marriage.

* Okay a little bit: Oh departed Joffrey. We hardly had time to try and strangle our television sets with you this season. And for the last time, let me just say that Jack Gleeson was the casting find of the century. No part of fan’s Joffrey-hatred was because of poor acting on Gleeson’s part. In fact, he managed to embody the most hated character in all of Westeros absurdly well. And I’m so grateful that the TV show didn’t try and soften or explain him – every show should have one purely maleficent character, and Joffrey is ours gosh durn it.

**In case you were wondering