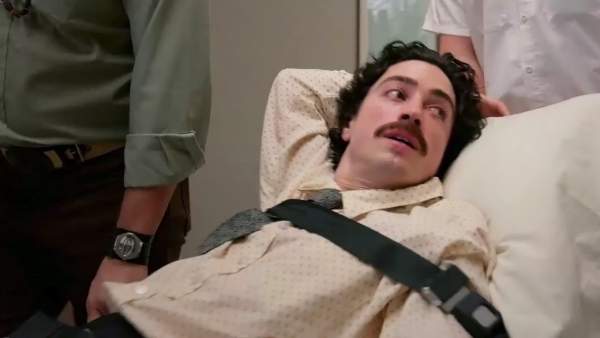 Another week on Mad Men, another chance for Betty Francis, nee Draper, to be a terrible mother. Teenaged Sally gets sent home from boarding school with a beat up nose and two black eyes after an incident involving swordfighting with gold clubs. Betty’s immediate thought is how a busted nose could affect Sally’s future, not out of any real concern for her child’s well-being. Sally correctly deduces that that the subtext of what Betty is saying is that if Sally is not the epitome of 1950’s beauty, she won’t amount to anything in life. Betty, ever the narcissist, feels like Sally’s beauty is a gift from herself that her daughter does not appreciate. Betty gets another chance to feel unappreciated later at a swanky diner filled with a who’s who of local politics. Betty makes the mistake of voices her opinion of the Vietnam War (she’s totally for sending college kids to die in a jungle on the other side of the world) and breaks the cardinal political rule of not rocking the boat. Once at home, Henry admonishes Betty, curtly suggesting she stick to topics of cooking and cleaning.

Things haven’t been going great for Betty’s ex either, as Don is still facing an uphill battle at SC&P, when he gets a phone call from an old acquaintance. It’s Stephanie, the niece of Anna Draper, the deceased wife of the real and also deceased Don Draper, whom had his identity taken by Dick Whitman. Anna was the only person who knew the truth about Don aka Dick and didn’t think he was a horrible person. Don visited her before she died and might Stephanie, who in turn found out about his secret. Now Stephanie has found herself a little pregnant and calls Don her help. Don sends her to Megan’s place in Los Angeles, before telling Megan, and immediately makes plans to fly out that night. Don is almost immediately delayed by Lou being an even bigger douchebag than Pete Campbell, leaving Megan and Stephanie alone for the night. At first it seems like the two are getting along great, both young hippies trying to make it in the world. Soon, however, their differences become apparent. Stephanie is the real deal, broke, free, and living the counterculture lifestyle, while Megan has a sugar daddy paying for everything. After Stephanie informs her that she’s aware of Don’s past life as Dick, Megan gives her a check for a $1000 and sends her away.

Don arrives almost immediately after Stephanie leaves, and instead is greeted with a party with all of Megan’s young un-jaded friends. It’s clear that Don feels out of place and alone even as he’s surrounded by people. The reason he was so excited to see Stephanie was that she was one of the few people who found out about about his past and didn’t turn on him for it. He wants acceptance for who his really is, and he can’t find that in a room full of hippies. Even a threesome with Megan and her friend is not enough to lift his spirits, which illustrates how much of an existential crisis Don is really going through.

A chance meeting with Harry at the party has only confirmed Don’s worst fears, as it appears that the partners are getting ready to fire Don, for real this time. SC&P are prepping a pitch for Philip-Morris, who Don trashed in a letter that made the companies name in the ad world. Don would be the sacrificial lamb needed to get the company back with SC&P, so he hops on a plan back to New York and literally walks right into their meeting. Don tells Philip-Morris that his letter did not reflect his actual feelings, and he was simply doing what was necessary to save his business. It seems to sway the execs, but Lou and Cutler are quick to dismiss any notion that Don has a future at the company. Don has tarnished one of the noblest acts he ever did, and it seems like it might be for nothing.

Oh Ginsberg, we hardly knew you. The computer has only existed for like two weeks, and it’s already taken it’s first victim. When the monolithic device was initially installed, it sent ripples through the creative department who would it as a threat. Ginsberg was especially freaked out by the computer, and couldn’t even work in the office claiming that the sound was getting to him. The first sign of trouble is when he turns up at Peggy’s apartment on a Saturday, after spotting Lou and Cutler having a conversation in the computer room. He couldn’t hear what they were saying (in a great homage to 2001: A Space Odyssey) but he is convinced that it is a plot to replace them all with machines. Ginsberg tries to force himself on Peggy, claiming that they have to reproduce to beat the machines. Peggy kicks him out, but things are about to get even worse/

At the office on the following Monday, Ginsberg presents Peggy with a gift to make up for his misdeeds. He claims that he feels better, having found a way to relieve the pressure. She opens the box to find his bloody nipple resting inside, apparently the the causality of Ginsberg’s pressure relief. Peggy understandably freaks out, and soon Ginsberg is hauled away on a stretcher, ranting and raving about how they’re all next. One of the main themes of Mad Men is that the future is baring down on all the characters, and some are trying to adept to the times while other clinging to the past. For Ginsberg, however, he reacted to the future with neither accepted or disdain, but with overwhelming fear. SC&P is nothing if not a stressful work environment, and it has already cost people their jobs and their lives, Ginsberg is the latest who fell prey to the merciless industry, but hopefully he can recover without anymore impromptu home surgery.