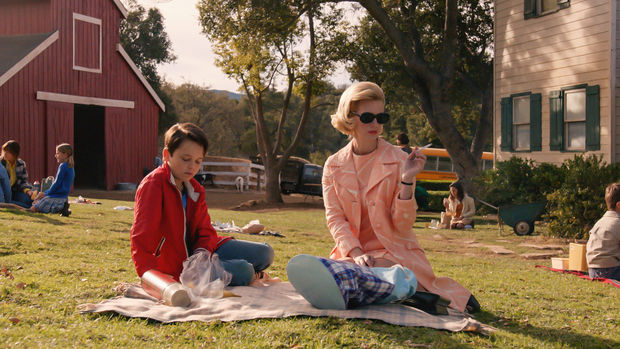 Another day of work for everyone at SC&P and another day at home for Don Draper. Still on the outs from his old colleagues, Don’s day doesn’t get any better when Megan’s agent calls. Apparent;y she has been a little too eager when it comes to the hustle of being an actress, basically stalking potential directors. Don flies back to Los Angeles to give Megan some surprise career advice, and her initial happiness upon seeing him is quickly replace with anger at Don’s tendency to assume a paternal role with her. Megan’s mood is not improved by the revelation that Don has been on leave from work for essentially the whole time she has been in LA, meaning that Don would rather mope around an empty apartment for months than spend the time on the sunny West Coast for her.  Megan kicks Don out, and soon he’s on a flight back to New York, with no Neve Campbell in sight this time.

The former Mrs Draper makes her first appearance of the season, as Betty meets up for her old neighbor friend for lunch. They talk about the joys of motherhood and the rewards of being a parent, and Betty does a great job pretending that she actually understands anything about that concept. Feeling guilty about not living up to other peoples expectations, Betty volunteers to chaperone a field trip at son Bobby’s school. The class travels to a farm, and Betty actually seems to be stepping out of her shell a little, and even drinks milk still warm from the cow. Everything seems to be going as well as can be expected, until Bobby reveals he traded one of their sandwiches for gum drops with a girl who didn’t have any real food. Betty is now without lunch, and rather than understand the compassionate mistake of her child, she returns to her typically ice queen form, which lasts for the rest of the day. Even at home later, Betty complains to her husband that Bobby ruined their perfect day. Because of f**king sandwich.

Back in NYC, Don meets with the rival agency from the season premiere and secures a job offer with the firm. With this leverage Don calls up Roger and demands a return to work. Don’s arrives at the office the next, and finds that exactly zero people have been informed of his impending return. Finding his secretary reassigned, his office occupied by someone else, and his old protege turned bitter and resentful. Don, the determined fellow he is, refuses to turn around and leave with his tail between his legs, and plants himself in the creative bullpen, sweating out the rest of the day consulting on whatever the firm has going on. Don finally gets called in to meet the other partners, and it has the feels of prisoner headed to the executioners block.

Character Spotlight: Roger Sterling
Rogers only appears for a limited amount of time in this episode, but his impact is widespread. It is Roger that Don calls when he as a new job offer, and who extends the olive branch that leads Draper back to SC&P. And Roger doesn’t tell anyone else and doesn’t show up until noon, but this was mostly just for his own amusement. Roger has become an increasingly desperate character has the years tick by, desperate not to be left behind in the wake of cultural and societal revolution. He takes acid, practices free love, and becomes less involved with the day to day workings at the office.

Roger at heart, however, wants to retain his old life, and the old way it worked. He doesn’t get involved in the counterculture because he wants to, but because he’s terrified of his mortality and his increasing irrelevancy. Roger has long been subject of derision at SC&P, stretching back to the days of Sterling Cooper. Even with his name on the building, Roger inherited his position in the company, and didn’t build it with Bert. He’s like a trust baby thirty years before everybody knew what a trust fund baby was. He’s actions with Don were just as much about getting people to pay attention to him at the office as they were about helping out his old protege. At the partners meeting it is Roger who points out what a financial precarious position Don has them in, and convinces the others to come around to the idea of Draper back in the office. This is the second time that Don has had his career in the hands of Roger, and Don, and the rest of the office, would be wise to not underestimate him again.