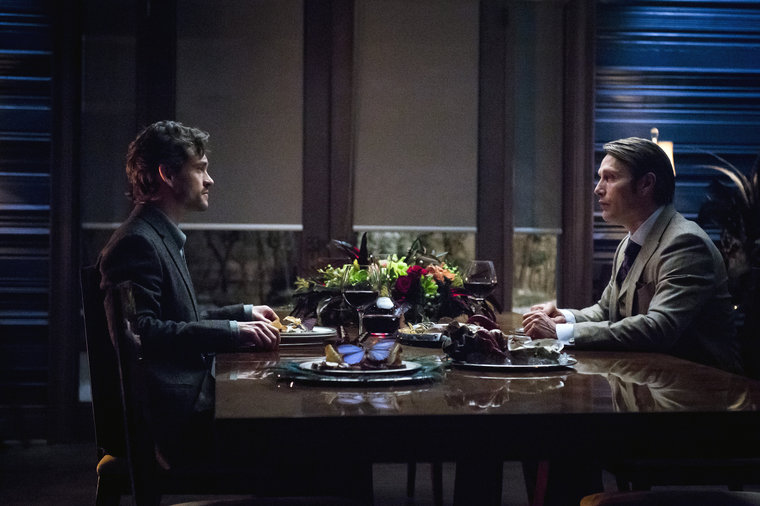 Hannibal‘s second season is starting to wind down. And by wind down, I mean in a strictly quantitative sense, because there is only one episode left. (Don’t worry; NBC announced the show would be getting a third season). The episodes themselves are intense, gritty and full of surprises. (spoilers)

Part of the show’s charm is that it’s never clear what exactly is going on. Season 2 has gotten progressively murkier and murkier. While most everybody is hiding something from everyone else, most of the ambiguity hinges on Will Graham, who not only hides his true intentions from the other characters, but also from the audience. It would seem he wants to take Hannibal down through any means possible – probably by having him killed. The flaw in the argument is Will has had plenty of opportunities to off Hannibal but hasn’t taken advantage of them. He could actually intend to help the FBI arrest Hannibal (doubtful, at this point), or he might be playing a very long, very risky game. Or there is also the probability that Will is just unhealthily obsessed with Hannibal as Hannibal is with him and can’t quite bring himself to kill him.

The way relationships have progressed this season has created a more even playing field. In season 1, Hannibal sat back and manipulated everyone, like some kind of diabolical puppet master. In this season, most of the main characters are suspicious of Hannibal and are playing the game, rather than just serving his pawns. Hannibal is still the best player, but having the dynamics mixed up has kept the show from going stale.

The only exception to character awareness would be Alana Bloom, who is only just realizing that Hannibal might be an evil cannibal. (For goodness’ sake, Chilton figured it out before she did.) It seems like Alana is supposed to be the innocent voice of morality, because at this point, she’s the only character who hasn’t gotten her hands dirty and she’s constantly questioning the other character’s motives and methods. But all this does is make Alana incredibly annoying, because she is so adamant about everything, and also, so wrong about everything. It’s baffling how someone can be so consistently and completely wrong, and yet so insistently sanctimonious. Even when she is proven wrong, she uses her self-righteousness as a shield to deflect any responsibility for her actions. More than I want Hannibal to be caught, more than I wanted Verger to get his comeuppance, I want to see the look on Alana’s face when she realizes the error of her ways.

Speaking of Verger and his comeuppance, if at all possible, the season has gotten more horrifying as it progressed. Bryan Fuller and his team must have some terrifying nightmares, because the sheer amount of surreal, disturbing crimes they imagine is frankly astounding. Though some (like in the case of Mason Verger- though I won’t get more specific so everyone can catch up and be horrified without spoilers) are events that happen in the original novels, each murder and mutilation is done with a creativity and daring panache that is distinct to Hannibal’s visual style.

With complexly written characters, bold visuals, and almost-poetic dialogue, Hannibal’s second season has shown it is still one of the best shows on air. Speculating what is going to happen in the finale is pointless, since Fuller has shown he, his cast and crew are more than capable of throwing curveballs. But if it follows the show’s mo., it will probably be tense, shocking, and violent. Very very violent.