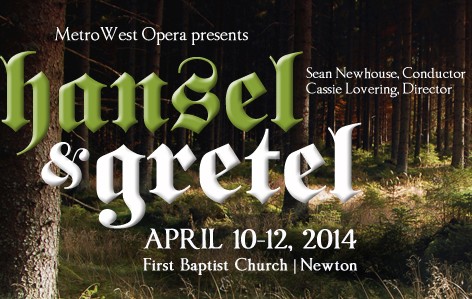 On a Saturday night, I had the pleasure to see MetroWest Opera’s production of Humperdinck’s Hansel and Gretel. Why do I say that I had the pleasure? Because it was good. Like sickeningly sweet with gumdrops good. MetroWest Opera was founded in 2007, and it has produced at least one opera every year since then; I am disappointed that this show is my first exposure to the company. Hansel and Gretel marks their Newton debut, after being previously based in Weston. The First Baptist Church in Newton Center provided an ideal location for the growing company. First, the production was easily accessible via the Green D line from Boston, while also having plenty of parking behind the church or in a metered lot (I was unsure if you had to pay the meters on the weekends, but I did). Second, the church is gorgeous and, while the acoustics could use some fine-tuning—more on that later—the space provided ample room for audience seating and an expansive stage for the production. With sweet voices and delectable directing, this production stole my heart and satisfied my sweet tooth for opera.

Hansel and Gretel follows the classic Grimm fairy tale without much variation, making the opera incredibly accessible for young and old alike. Also, despite Humperdinck’s German origin, the opera is most often performed in English, as was MetroWest’s production (they were even kind enough to provide physical librettos for audience members, a nice touch for those of us who like to have some familiarity with the opera before it begins). For those of our readers who don’t remember this classic cannibalistic tale of greedy children, here’s my brief synopsis (tailored to the opera, of course): While their Mother (Sarah Gardner) is away, Hansel (Jacque Kress, in a pants role) and Gretel (Emily Tweedy) half-heartedly perform their chores, but they do a far better job annoying each other and providing delightful brother-sister moments for the audience. Gretel shows her brother the jug of cream that a neighbor gave them, but, when Mother returns unexpectedly, Gretel spills it.  In a fit of anger, Mother orders them to pick strawberries in the woods. Their Father (Joe Santaniello) returns home and warns Mother that the woods are home to a vicious Witch (Oriana Dunlop) who feasts on children-turned-gingerbread. Mother and Father fear for Hansel and Gretel’s lives (probably knowing that they didn’t teach them “Stranger Danger”) and they race into the woods to look for the two children.

Hansel and Gretel wander deep in the woods, but grow frightened of the shadows in the forest. Luckily, a mysterious Sandman (Katie O’Reilly) soothes the children to sleep, where they enjoy dreams of delicious desserts. Awaking in the morning, Hansel and Gretel realize that they had the same dream, that they’re both incredibly hungry, and, oh look, a mysterious delicious gingerbread house appeared overnight. How magical. The hungry children decide to taste and then devour the house, much to the watching Witch’s delight. She appears to the children and offers them candies and sweets, but they wise-up and try to escape. She freezes them with her magic and puts the fat-boy Hansel in a cage to eat later and puts poor Gretel to work with a magic broom. With some clever maneuvers by Gretel, she steals the Witch’s magic spatula and convinces the Witch to lean into the oven, which allows Gretel and the freed Hansel to push her into the oven. The oven freaks out (probably from losing its magical owner) and frees the gingerbread children previously trapped by the Witch. With flourish, they celebrate, Hansel, Gretel, now-human-again gingerbread children, Mother, and Father.

Why do I explain a story that everyone knows? Because the production makes it incredibly easy to follow, enjoyable for audiences of all ages, and the real magic begins with each character’s clever interpretation of these iconic roles. Beginning and ending with Kress and Tweedy, the two female performers make this brother-sister duo a pair to watch. From teasing to clinging to each other for survival to celebrating their success, Tweedy and Kress are just a delight. Comfortable with the music, they surpass expectations by adding their own flourish to the role, from bounding around the space to engaging in playful and childish antics, they transform into these fairy tale children before our eyes. The music is a wonderful blend of leitmotifs, which tell the story almost without words, introducing characters, reinforcing themes, and perfectly setting the moods for each scene.

The supporting characters are icing on the cake. Gardner perfectly told the tired Mother’s story with her booming voice and exasperating sighs; underneath each scolding was a mother yearning to love her children, to teach them well, and to want a better life for them. The opera is nothing without a strong antagonist and Dunlop fills the role with her sass and over-the-top delicious devilish. Dunlop performs the Witch with a kind of off-kilter humanism, complete with her powdered face and heavy make-up. Scarily realistic and horribly evil, Dunlop delights in her evil schemes, skipping along with a childish energy and stalking her prey (the children) with equal abandon. Her voice is truly magical, performing the range of her impressive repertoire while adding her own interpretation of the Witch’s warped personality, with laughs, smirks, and cries to send a shiver down your back.

Surprisingly, Mike Bromberg’s lighting design is incredibly effective. Though much more heavy-handed than I usually enjoy, Bromberg’s sharp and bold colors accent the scenes with a storybook charm. Equally effective, Juliana Gregori’s costume design was colorful and flattering, especially the Witch’s costume, with her showy pink tutu (long gone is the black-attired Witch, and we’re in for a treat of evil dressed in a ballerina’s clothing). While Josh Kigner’s set design left something for the imagination, it proved useful in transitioning easily between scenes and letting the focus be on the actors and their work.

But the best work of the evening comes from the innovative and resourceful helms of the production, Cassandra Lovering and Sean Newhouse, director and conductor, respectively. Lovering crafts this story with such accessibility and ease that it plays across generations and through time periods, and transcends its source material into a human story of adventure, fear, and success. Newhouse navigates the impressive orchestra and coaches the best from the cast’s masterful performance. Together, they create so many delightful moments of clever storytelling and musicality that you can’t help but be drawn into the drama of a story for which you know.

My only complaint is that the space needs acoustical help; there was sometimes a very big difference between sitting in the very back row and sitting in the four row, and stage microphones with proper amplification could work wonders. I would also love to see some edgier, sexier, and dark work from this company. Hansel and Gretel has its place in the opera canon, but with such talented performers who can act and add character to their impressive voices, they deserve to showcase their work with a stronger story and more engaging characters. While I don’t know what else is in store for MetroWest Opera, I can’t wait to see their next work to see if this magic lives on in their future productions. Committed to giving young talented opera singers the opportunities to shine, this company will be discovering future talent long before many other Boston companies, and for that, I hope to continue to discover these performers along with them.