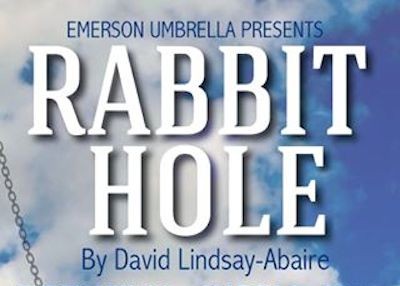 The Greater Boston area has seen its share of Rabbit Holes. The Umbrella (formerly the Emerson Umbrella) presented its own production of David Lindsay-Abaire’s Pulitzer Prize-winning play about what it means to grieve and how to cope with loss in our everyday lives. Becca (Allison McCann) and Howie (Randy Elkinson) are parents who lose their young son, Danny (an uncredited role—more on this later) to a sudden car accident. Six months later, they are still reeling as they attempt to live, work, and love as a new family with one extra place setting and one extra crème caramel. Becca’s younger sister, Izzy (Shawna Ciampa), is pregnant with her first child and this forces Becca to consider that she is no longer a mother, complicating her relationship with Howie. Becca and Izzy’s mother, the Kennedy-spouting and alcohol-flowing Nat (Jennifer Bubriski), offers solace as a woman who has also experienced loss, albeit in a different but no less horrific way. Finally, we are introduced to the young teenager who seeks redemption and forgiveness for the accident, Jason (Noah Virgile). Together (and apart), each of these characters seek the comfort to face their daily lives without the hurt of losing someone too quickly, too young.

Part of Lindsay-Abaire’s strength as a playwright, especially in Rabbit Hole, is taking the mundane acts of the character’s lives (folding laundry, hosting a birthday party) and giving them meaning and context. However, the cast struggles with making everything too large for Lindsay-Abaire’s simple script. Words are thrown, tantrums are had, and moments are expressed, instead of merely experienced. The cast tries too hard to make their emotions seem real and poignant such that the play borders on the melodramatic at times. The delicate balance between living their simple lives and making a theatrical production is difficult to establish, however, it’s a necessary balance when so much of the play can become a bad Lifetime movie.

Not to say that the cast took it to that level. They show restraint, especially in some of the group scenes—Izzy’s birthday party moves at a nice pace—however, the cast also fails to build climaxes and, instead, bursts into emotional outbreaks at the turn of a hat. The worst scenes, unfortunately, are between McCann and Elkinson. Combined with difficult staging and an awkward chemistry between these two actors, the scenes fall onto hard times. Their living rooms suffer from pacing issues, but also feel ungrounded in natural human reactions. Elkinson is probably the worst perpetrator of this grandiose acting and failure to connect with his character, but the other actors also seem uncomfortable in their own skin. In addition to each scene being an unexpected topsy-turvy of emotions, the arc of the production is missing something. The play progresses at unsteady starts and stops, and the characters’ emotional journeys never feel like they’re moving towards, or fighting for, something.

While the cast creates some nice family moments, especially in the birthday scene, they suffer from a lack of chemistry to make them feel like a once-whole family and unit. Without these tender moments of understanding and history, the emotional breakdown and metaphorical distance between the characters doesn’t feel “wrong.” McCann and Ciampa never reach the level of “sisterhood” (whatever that means). Familial relationships are some of the hardest to create onstage because they require the actors to develop and understand years of back-story, from fighting over Barbie dolls to losing a member (or two) of their family. McCann and Ciampa have fleeting moments of this level of connection, especially in their opening scene, but they are quickly lost as other layers are piled onto the story. Underneath the emotional wreckage, we should see a family unit which struggles, fights, and yearns to re-establish itself. This production of Rabbit Hole never quite reaches that level.

They are given a beautiful set (home) with which to live and play, though. Designed by Brian Boruta, the set features the pristine living room, the warm dining room, the lived-in kitchen, and the haunting Danny’s room. The set looked lifted from a furniture store showroom or a made-to-order furniture catalog set. Unlike so many other productions of Rabbit Hole with its hodge-podge of various styles and makes of furniture, this set looks like a functional home. You can see Becca’s taste, her love for order and stability within her home. A few concerns, however: The home almost looks unlived in, which make finding Danny’s toys or the idea of Becca seeing Danny’s smudgy fingerprints almost unbelievable and fabricated. (A brief nod to Sarah Marshall for her excellent properties design, as the many props helped facilitate the life-like action onstage). More concerning, however, is how functional the set design is for the play’s action. While gorgeously arranged and designed, surprisingly, the actors do not feel comfortable in the space. They wander from couch to refrigerator with robotic grace. The problem lies with director Bill Deschenes. Deschenes has literally blocked himself into a corner. The audience is seated on three sides of the action, however, the actors are blocked to play to a proscenium thrust, making more than a few key moments virtually unseen or not understood. If you sat on either of the “wings,” the living room scenes between McCann and Elkinson featured a strong performance by their backsides with supporting roles played by their sides. And here’s the issue: when the play demands an emotional connection between the audience and the characters, you can’t afford to lose the audience on the journey or you risk alienating them like a bad soap opera. It felt as though Boruta and Deschenes rarely communicated about the set’s playing space prior to blocking and, once constructed, the set seems to swallow the actors in its immensity. Here, the set was like the sixth character whose presence intimidated and dwarfed the actors.

This wasn’t the only disconcerting choice by Deschenes. For some reason, he chose to have a voice-over for the start of Jason’s first monologue and then have him “appear” in the audience (where he just watched the first 40 minutes of the show). Did Deschenes make this directorial choice to signify that any of us could have been Jason? The choice is alienating, at best. And Deschenes needs to have another crack at this script by making another change: seeing Danny. Danny should remain unseen. There, I said it. He’s given only one passing characteristic: he may (or may not) have red hair—the significance of this feature depends on the characters’ reactions to an often throw-away line in Act II. So, why not show Danny? Because the desire to see him hurts. The audience desperately wants to fill the missing pieces and, yet, all we get (according to Lindsay-Abaire’s script) is his voice. We’re left with very little of Danny to construct a once happy and lovable little boy. And that’s how it should stay. The audience’s desire to create their own Danny and to want more from the characters’ memories of Danny create interesting theater. Throwing these emotional connections away by giving us a not believable four-year-old boy destroys that opportunity (Note: if the uncredited boy in the movie is actually four years old, I apologize; if he’s actually four years old, he deserves to be credited and shipped off for some modeling and movie contracts ). These directorial decisions diminish some of Lindsay-Abaire’s resonance and decision-making.

Rabbit Hole is a difficult but rewarding play to watch. The Umbrella’s production failed to create the realism and truthfulness that the play affords and provides for the audience. I wanted to enjoy the characters’ journeys, watching them fight to recreate their family and themselves. But you can’t recreate what was never really there. While they make a solid effort and they boast one of the most impressive sets that I’ve seen (save Broadway) for this play, they fall victim to the thoughtless directing choices and difficult material. Like the characters, I struggled to find the play’s meaning behind the emotional dissonance of the performers’ theatricality and the director’s well-meaning but off decisions.