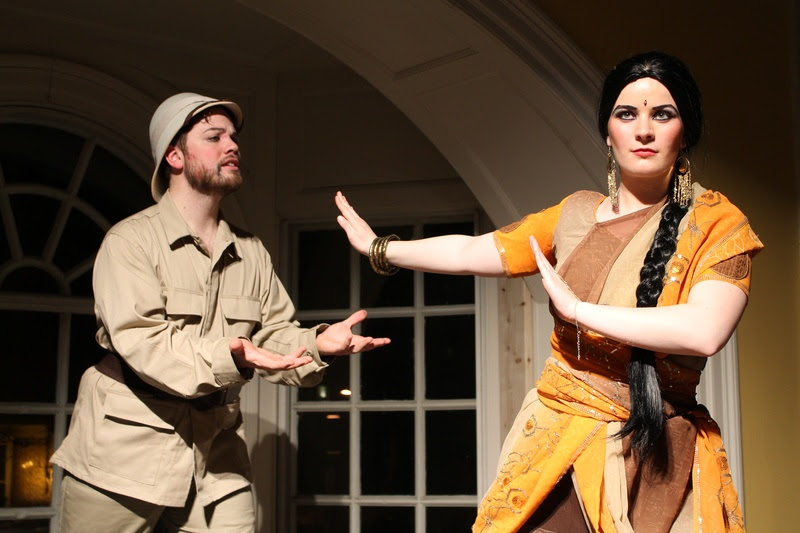 The Opera That Should Remain Buried in History

Last week, the Lowell House Opera presented the rarely-performed (and perhaps it should stay that way) opera Lakmé by Léo Delibes, directed by Roxanna Myhrym and music directed by Lidiya Yankovskaya. The Lowell House Opera bills itself as the longest continually performing opera company in New England. The opera is rough around the edges, despite some noble efforts under strained circumstances. The opera, sung in French with English subtitles, is an odd duck; it mocks colonialism, especially the British, while espousing a high respect for culture and religious beliefs, even bordering on the pagan. It’s just not that interesting.

The opera centers around Lakmé (sung beautifully but simply by Liv Redpath, ’14), the daughter of Nilakantha (performed with wrathful emotions by Ian Pomerantz), a Brahmin priest, who falls in love with a young British officer, Gérald (Garry McLinn), when he stumbles into the secluded and forbidden temple. Nilakantha, returns to find the garden and temple trampled by outsiders, namely, Gérald; Officer Frédéric (Samuel Bowen); and the silliest of trios, Ms. Bentson (played with wonderful arched humor by Alexandra Dietrich), Miss Ellen (Natalie Dewey), and Miss Rose (Camille Crossot, ’16). And, thus, unleashes the wrath of Nilakantha for the entirety of Act II. The conclusion is not surprising; someone cannot live, so we have three options; Delibes goes with the tragic heroine death, and we’re none the better.

Overall, the opera felt dated. The topics failed to resonate, the actors failed to connect, and the characters fell flat. While Dietrich had some humorous moments, most of the action felt like it was performed to the audience in a chamber concert rather than an immersive experience into the opera’s world. It’s not surprising that some of the other opera companies in Boston have not performed Lakmé since 1914. Yankovskaya provides “Notes on the Opera” in which she comments on the limited performance history of this opera. She even goes as far to call it “in-depth musical and character development,” though the opera relies on mere archetypes rather than anything profound or approaching three-dimensional. While Redpath attempts to create an independent and thoughtful young woman, she comes across as strained and far too affected by forces outside of her control. What could have been a thoughtful commentary on gender, contrasting the British women with Lakmé, instead, labored under superficiality.

Of course, that’s not to say that these performers are untalented. Redpath performs her Act II aria with skill far beyond her years and she seems to understand the sheer power and range of her voice. McLinn’s tenor sounds weak and forced, especially in his upper register, leading me to wonder what makes his Gérald such a catch. Bowen performs an entirely forgettable character. The trio of women is bright, but unfocused, and the two young performers resort to campy movements rather than motivated or individualized actions. Surprisingly, Mallika (Heather Gallagher), Lakmé’s servant, is also forgettable, and the famous “flower duet” is a mere blip in the evening’s performance. Not to say that Gallagher is bad; she handles her singing with the same veracity as Redpath’s Lakmé. However, Gallagher has more limited time on stage with her most notable being in the earlier scenes. The entire character seemed unfocused, and it’s unclear whether the fault lies with Delibes in his writing or Myhrum in her directing.

Overall, the performers lack direction; Myhrum’s direction seems uninspired. The focus seems to be on the beautiful and soaring music, led by Yankovskaya. While the musicality is important, especially for an opera with the famous “flower duet,” the opera is nothing but notes without the passion, driving energy and force, and conflict inherent in theatrical performance. What lacked was the inspiration to act by each separate character, instead of the monotonous storytelling which is so often seen in opera. Instead of a partnership between action and music, the opera was one-sided. A chamber performance might have been a better billing. The ensemble is a mixed bag of uninterested with talented performers, allowing your eye to scan the ensemble numbers for the performer making the effort. As long as you focused on him or her, you could avoid being bored or wondering why the character was even on-stage. The opera might be beyond the Lowell House Opera’s usual billing, and the stretch might have been too much, too soon. Or it could simply be a bad opera, filled with archetypes, poor motivation, and a strained and weak plot.

Mark Buchanan’s set is functional, but, good god, the scene changes are more painful to watch than McLinn’s clunky movement from comatose on the floor to off-stage to his original position, all during a semi-intermission between Act II and Act III. Actors rolled out to help flip some curtains to show a change in time, in mood, or something that was supposed to connect with the audience. The space is a disservice to the company; a renovated dining hall does not make fine theatre. I had to laugh when I saw numerous patrons sitting in tuxedos while the smell of cheap perfume and Coors Light surrounded me. The lighting was also a difficult task to maneuver as the dining hall offered limited lighting (some gorgeous chandeliers) but everything else needed to be hung from the make-shift lighting grids. Additionally, the monitors used to displayed the English subtitles were attached to these poles, making it difficult to see and read the subtitles while enjoying the action. While not the more egregious issue, audience members frequently craned their necks from one side of the other stage to the center in order to capture some of the fleeting words and action. Thankfully, there wasn’t a lot of story to follow in this simple opera.

I found the opera a bit disappointing, especially given the high credentials for Lowell House Opera. The actors were a mix of talent, the set looked like a Gilbert & Sullivan operetta by a high school choir, and the story moved at a sluggish pace. However, the greatest fault is in the source material; it’s just not that interesting. While I appreciated the play’s messages (some of the focus on imperialism, clashing cultures, and religious tolerance is fascinating, especially as we continue to grapple with the same issues today), I thought that other stories have done the same work, only better. Perhaps a clearer directorial concept and a more committed cast could bring this long-dead opera back to life, but I wouldn’t hold my breath. For now, let’s wait another hundred years for a revival.