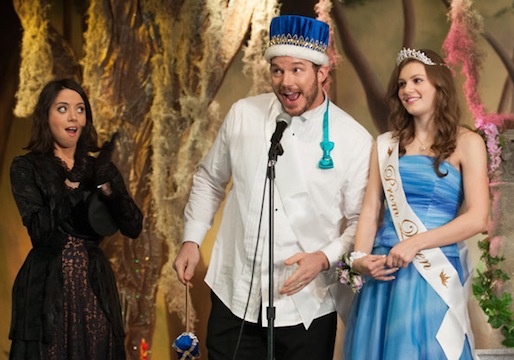 Why am I always so surprised when Parks and Rec is utterly perfect? This episode was simply hilarious. It’s prom time in Pawnee and one girl’s soul hangs in the balance. Actually, April’s soul is kind of in there too. Two girls’ lives will be changed forever at the prom!

When Leslie finds out that the high school can’t afford to have a prom after the merger, she decides it’s up to the Parks Department to plan the best prom ever. Leslie also decided to volunteer to teach AP Latin. She just needs to learn Latin first.

High schooler Alison helps the Parks Department plan the prom and Leslie starts getting ideas. Alison is basically a Leslie replica and Leslie wants Alison to take April’s old internship, which April named “The April Ludgate Summer Solstice Druid Festival and Buffalo Wings Eating Contest.” Then, if and when Leslie leaves, April will become Leslie and Alison will become April. Ron knows Alison’s dad, however, and he has other ideas for Alison. He wants to get her a paying job. He knows he can do it since he built the owner’s saw mill. And the battle for Alison’s soul begins including a helium voiced threat and Ron’s giant old “mobile telephone.” They wind up in the principal’s office, which has never happened to Leslie before, and promise to stop harassing Alison. But Leslie won’t give up. She runs on stage to tell Alison she won the internship. Alison gets overwhelmed by Leslie’s plans for her and Ron rushes Leslie off stage as she yells for the students to use protection. Ron goes up to Leslie and tells her that she’s nearing an 8 on his crazy Leslie scale. She admits that she’s worrying about the Chicago job. He gives her some sage advice about how you can’t plan the future and turns out to be right as always. They ultimately apologize to Alison.

Leslie appoints Tom to be in charge of music. Ben gets upset ant Leslie gets disgustingly affectionate. Then, Tom and Ben are in charge of the music together and it quickly turns into a competition. Tom is so sure that he has the best music and the best flair. He has a strict system for picking songs. He accidently bought a Lumineers song and had to throw out his computer. He’s shocked to find out that he’s not as cool with high schoolers as he thought. They all love Ben’s music. Ben reassures Tom that he’ll never be as old as him. Also, he’s been too busy becoming a successful businessman.

Though April doesn’t want to go, Andy serenades her with the song he wrote for his original prom date and she begrudgingly says yes. Besides, they only have one car since Andy “laked” hers. Andy rents a limo and April comes out in a veiled black dress. It’s already perfect. But then, something amazing happens. We get the creepiest Oren moment in history. He pretends to be April’s mom and takes pictures. And it is beautiful and disturbing. Champion comes out as her father, which is adorable. Andy has the time of her life, but April hates it. Donna tells April to be honest with Andy. April admits that if they had been in high school together she and Andy never would have gotten together. Andy says all that’s important is that they’re together now. He wins prom king (April rigged the election) and his first decree is to make April his queen rather than the real winner.

Some of the characters think back to their own proms. Leslie went with Harvey from the AV club and they made out. A few weeks later he almost died from a VCR electrocution and now he can turn on microwaves by blinking at them! Andy’s prom went really well. At least the after party did. Ben couldn’t go to his prom because it was right after he got impeached. His parents threw him one instead which is incredibly depressing. Tom took too long to get ready and only went for 15 minutes. Ron left his prom early to go to work at 12. Donna didn’t go because she was dating an older man.

Then, the greatest moment of the episode happens. Greg Pikitis makes his return, peach in hand, and it is glorious. His first episode was one of the first episodes that made me love the show. And his brief appearance as Alison’s boyfriend is glorious. Yes, he did tape the tablecloth to Leslie’s dress. He’s Greg Pikitis, after all. Leslie realizes that Alison can’t be the intern. She has terrible judgment.

This was just perfect. What an incredible episode. I was getting a little worried that Parks and Rec would run out of steam. But no, they’re as strong as ever.