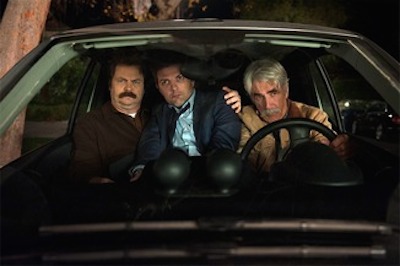 Leslie’s pregnant! Congratulations Ben and Leslie! This is so exciting. Great, that’s out of the way.

Parks and Rec has been going back to some classics this season and they’ve been great. First Greg Pikitis and now the Flu Season. Though this episode didn’t have much to do with the Flue. Larry’s in quarantine and that’s basically it. Leslie thinks she has the flu but quickly realizes she’s pregnant which is obvious but still exciting and wonderful.

Leslie and Andy go on a trip to get new country sensation Chipp McCapp, played by Bo Burnham. McCapp was supposed to play the unity festival but canceled because he has a prior engagement, he has to get his haircut. It turns out he’s a horrible human being and Leslie doesn’t want him there anyway. So, she and Andy go on a mission to get Land ho back together. They visit a member whose kid is obsessed with Johnny Karate. Andy tries to get the musical icon to sing Johnny Karate songs with him, but to his frustration, he just can’t get it right.

Meanwhile, Tom goes to a Sommelier competition in order to find someone to hire for his restaurant. Craig and April decide to compete as well and it’s hilarious. In the end, neither of them pass, but Craig proves to be pretty capable. He wants the job, but has to calm down. So, his manners are tested and he’ll do a good job as long as the wine cellar is sound proof so he can scream about how terrible everyone is.

Ron and Ben also went to the competition. But Ben has a breakdown when he finds out that his parents sold their old lake house and sent him a check for it. Then he gets incredibly drunk off of blueberry wine and it’s priceless. I love it when Ben loses it. Ron does not even try to help and console him. It’s okay, though because they run into Eagleton Ron. He convinces Ben to reach out to his spirit animal and throw the check into the fire.

Ron gets Ben home and tells him that it’s all about perspective. At the end of the day, his family is what makes him happy. This makes Ben think. He goes in to find Leslie already home. He tells her that he wants to start a family, and she has good news for him.

This was a great episode, but I’m biased. I love anything with Craig and crazy Ben in it. I’m so excited that Leslie’s pregnant. It’ll be fun to see how this affects the show and her decision about Chicago.