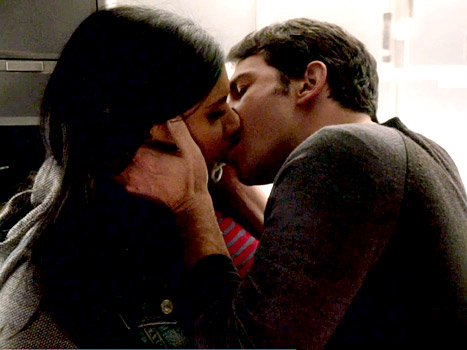 Just as New Girl stands on the precipice of undoing all the good will I feel towards it, Mindy Kaling (and her fictional counterpart, Mindy Lahiri) is back to brighten my Tuesday evenings. Or more accurately – my Wednesday in-a-rushed-half-hour-before-work.

And brighten it she has. I thought it was a bit rash (and definitely not built up to enough) when The Mindy Project took the prospect of a looming, unplanned for haitus to have Mindy and Danny lock lips for the first time, but even the grumpy tv reviewer in me had to admit that butt grab was hot. And let me say that if the first two episodes back are any indication of how the show will deal with a potential Danny/Mindy coupling, I’m on board.

But since The Mindy Project is a show that inexplicably doesn’t get enough love here on My Entertainment World, let’s take a moment to talk about how great, if still uneven, this season has been. The addition of Adam Pally is part two in my two part series: How To Liven Up Your Single Camera Sitcom By Adding an Actor from Happy Endings. Adding Adam Pally to the cast of doctors did something that this show has struggled with from the very beginning: it made the doctor’s office stuff engaging even when neither Danny or Mindy were involved. Pally is a gifted comedic actor, and Dr. Peter Prentice helps to distract from the general story-black hole that is Jeremy (and the scenery chewing ridiculousness that is Morgan).

On top of that, Season Two has done a really good job of utilizing the oft-mocked guest star boyfriends of Mindy to great effect. I really liked Anders Holms’ Casey, but I think that as the series expands and adds more people to play with (Mark and Jay Duplass’s creepy midwives, Bill Hader’s crappy ex-boyfriend, Glenn Howerton’s spurned lover lawyer) it turns The Mindy Project into a repository for great B-list comedic actors.

Plus the writing’s been spot on, especially as the team gets increasingly proficient at crafting Danny Catalano as a spectacularly weird dude. I still giggle thinking of the scene when Danny’s ex-wife discovers Danny’s browsing history, and the slow horror that registers over Chris Messina’s face as he realizes the implications of this. These most recent episodes showcased the show’s madcap timing, and ability to pull punchlines from thin air. Mindy dances on the line of being truly subversive (think: this weeks, “quick, go find a white nurse… he’ll be gone for hours.”) without ever being quite brave/stupid enough to step over it, but it still makes it  fun, unique voice in the world of the situation comedy.

The Mindy Project is not perfect, nor are its first two efforts back. Especially in the first episode, the show fails to really land the subplots (Pally does a good job trying to sell it, but there’s no stakes involved in the doctors team up with the midwives to try and land the ballet account. Plus, seriously. How pregnant do ballerinas get?). The show benefits more when the best actors are in the closest proximity (see episode two, where Peter has to play cupid to Danny and Mindy, both of whom are suffering simultaneously from viral meningitis and accidental-sex-tape-it is) and suffers when it tries to anchor a subplot too far away from the action. But these two episodes confirm that Fox is showing surprisingly shrewd business sense in investing in the Mindy Kaling brand, renewing the show despite its lackluster ratings.