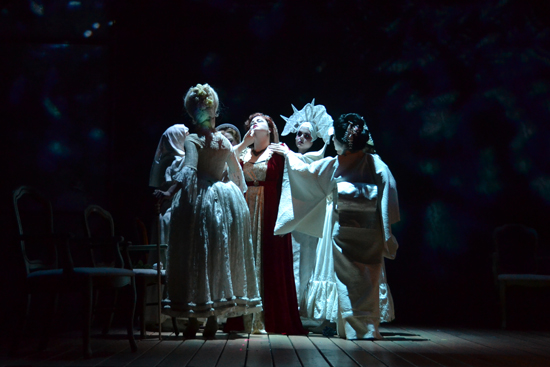 Florencia en el Amazonas is a relatively unknown opera; it’s modern, it’s Spanish, it’s artsy. However, the Boston University College of Fine Arts School of Music Opera Institute and School of Theatre (wow, that’s a mouthful!) show that the production is reminiscent and in every way equal to the classics from which composer Daniel Catán and librettist Marcela Fuentes-Berain derive their opera, expertly conducted by William Lumpkin. Florencia is inspired by the famous Gabriel García Márquez’s Love in the Time of Cholera, but the opera is itself a gorgeous vehicle of love which transcends its source material.

The plot is easy enough to follow, despite being sung in Spanish with English subtitles. The famous soprano opera singer, Florencia Grimaldi, resiliently imagined and portrayed by Kasey King, travels down the Amazon River to her homeland to sing at the opera house in Manaus. This performance is no normal performance because she hopes that her reappearance will attract her long-lost lover, Cristóbal, a butterfly hunter, to reemerge from the depths of the jungle. Florencia boards the steamboat El Dorado with a number of other interesting passengers, none of whom originally recognize her (despite openly singing her praises, unaware that they are singing to her). In particular, a journalist, Rosalba, plans to write a book about Grimaldi and hopes for an interview in Manaus, furiously scribbling notes and questions in her notebook. Rosalba was enchanting to watch, beautifully sung by soprano Katrina Galka, as she slowly falls in love with the steamboat captain’s nephew, Arcadio, played by soaring tenor Christopher Hutchinson. A bickering older couple, Paula and Alvaro, played with some grace by Bethany Hickman and played steadfastly by Benjamin Taylor, respectively, are also on the boat to provide some much-needed foils for the young lovers. The commentary on what it means to fall in love, the depths that one is willing to go to fall and avoid falling in love, and the timeless musing on the pain of being in love are sharply portrayed in this opera. I found the majority of the love stories a tad tiring; Hickman and Taylor never hit their stride as lovers who had been through the wringer, desperately holding onto a past love, such that any reconciliation feels forced and unnatural.

The opera is unique in its use of magical realism a la Márquez. Most notably, you have the incomparable Riolobo, played with the stunning and nuanced baritone Nickoli Strommer. I can’t say enough good things about Strommer. Unexpectedly, he stole the show in subtle ways through his professional and exquisite musicianship, his comfortable and malleable physicality, and his strong presence onstage. He made the perfect spirit of the Amazon River, both otherworldly but infused with enough human characteristics to make him able to cross between the two worlds with ease. As the opera’s narrator, he is the guiding light and force which propels the show forward at the perfect tempo. Strommer has a bright future ahead of him, and I hope to continue to support his own journey as an artist. Galka’s Rosalba was also a joy to watch, especially when she sang alone; her chemistry with Hutchinson’s Arcadio grew on me, but something seemed disconnected about their performances. Perhaps the issue lies in the source material which strings together some merely trivial episodes (Rosalba’s notebook gets tossed overboard and saved by Arcadio, they play cards together), which are supposed to create their timeless love affair. But Galka’s best work is when she is portraying an independent and strong woman; her Rosalba is a woman with goals without time for dreams, and Galka moves in honest and sharp movements to portray her rushed nature. It’s only when she slows down and falls in love that she becomes that much less interesting. I blame the character of Arcadio, and perhaps Hutchinson’s portrayal, though he has a gorgeous singing voice for the role.

Despite the opera being titled after Florencia, it’s surprising that the supporting characters create such nuanced and interesting performances to match this lead. However, there is no better character the El Dorado itself. To match the magical realism, stage director Nicholas Muni, with help from the talents of scenic designer Courtney Nelson, create an awe-inspiring boat. The “boat” is a moving platform which the steam captain, Capitán, played by Zack Rabin, rides high above the stage’s action. While nothing profound, the journey into the metaphysical was breathtaking. By not being limited by the physicality of a clunky boat, the production could focus its attention elsewhere: the clever addition of a female ensemble. In his production notes, Muni emphasizes Florencia’s psychological and emotional journey. The use of Puccini’s great heroines as different personifications of Florencia is a striking ensemble. Complete in gorgeous costumes of masks and wigs, feathers and gowns, Kathryn Schondek’s costume design is simply marvelous. Of course, the strong female ensemble tell stories with their bodies, from their movements to their poses, everything is perfectly portrayed to give accents to their heroines.

This was one journey that I was happy to attend. While the women outshone the men, with the exception of Strommer, the opera was a beautiful platform to showcase some stunning female talent. From Galka and King’s excellent soprano voices to the talented female ensemble, the opera was a testament to the talented faculty and student body at BU’s College of Fine Arts. I look forward to my next journey to BU with Mozart’s Don Giovanni, stage directed by Daniel Pelzig and again conducted by William Lumpkin, playing April 17 – 20, 2014, at the Boston University Theatre.