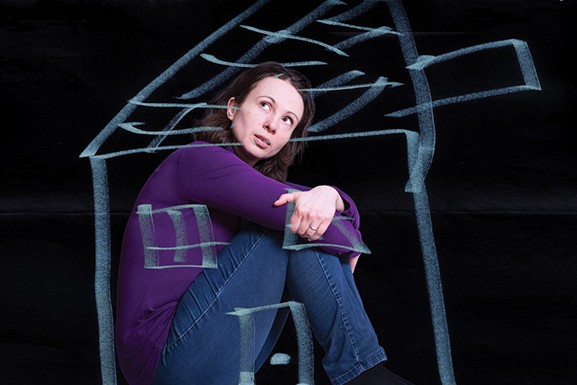 Now… I had never been to the Alumnae Theatre before. In fact, I didn’t even know it existed. If you are in that boat too, those are big mistakes. Rabbit Hole’s production team makes a shoestring budget look like a navy anchor line that larger Toronto outfits would drool to have on board. Its cast, skillfully helmed by Paula Schultz in the role of Becca, make easy work of a daunting text. And its director/lighting designer makes mountains out of molehills in the best possible way. This is really good stuff.

First up, the cast. Schultz is so controlled in her performance that it becomes utterly transfixing. This alone is worth the price of admission. While occupying only a fragment of stage time, Christopher Manousos’s teenage Jason brings such a poignant mix of vulnerability and resolve that he could have stolen the show from anyone other than Schultz.

Rabbit Hole’s success continues with the production team. I’m all for directors who do lighting design, or who have a background in the field. This production is a perfect example of why. Hardy’s meticulous setup of functional and conventional lights, coupled with a brave use of slow fades is nothing short of triumphant. It is a rare occasion when lighting design deftly serves the cast, set design and its own purpose in equal measure. Simply put, Hardy’s integration of lighting is symphonic. Not only that, but he supports his cast by precise direction that feels both unencumbered and delightfully invisible. Sara Brzozowski’s costume work is faultlessly bland. Jacqueline Costa’s mammoth set is one of those well-conceived multi-level architectures that you want to come early just to behold (and then get angry because you have to wait to see what they do with it).

My only major niggle comes in the form of the sound design, which brackets scenes with ethereal, America Beauty-esque tracks. Instead of punctuating or underscoring the emotional meridians of each scene, the sound design detracts from the cast and script’s expertly created tension (akin to that version of Closer you probably saw in college). Look, I get it – when dealing with a kitchen sink, sometimes a smattering of mood music is just what the doctor ordered, but here this fantastic production might have been better served to let the actors just speak the speech (because they do it really darn well).

If Alumnae continues to cultivate this kind talent both technically and artistically, you can only expect great things in their upcoming season. And Folks … I know there are bigger theatres and more expensive productions. I know you’ve probably seen the film. And I know that it might be out of your way. But please, just see this. At the very least I’d keep an eye on what Director/Lighting Designer Paul Hardy does next, because this production team is firing on all cylinders.