A Lady Never Kisses and Tells 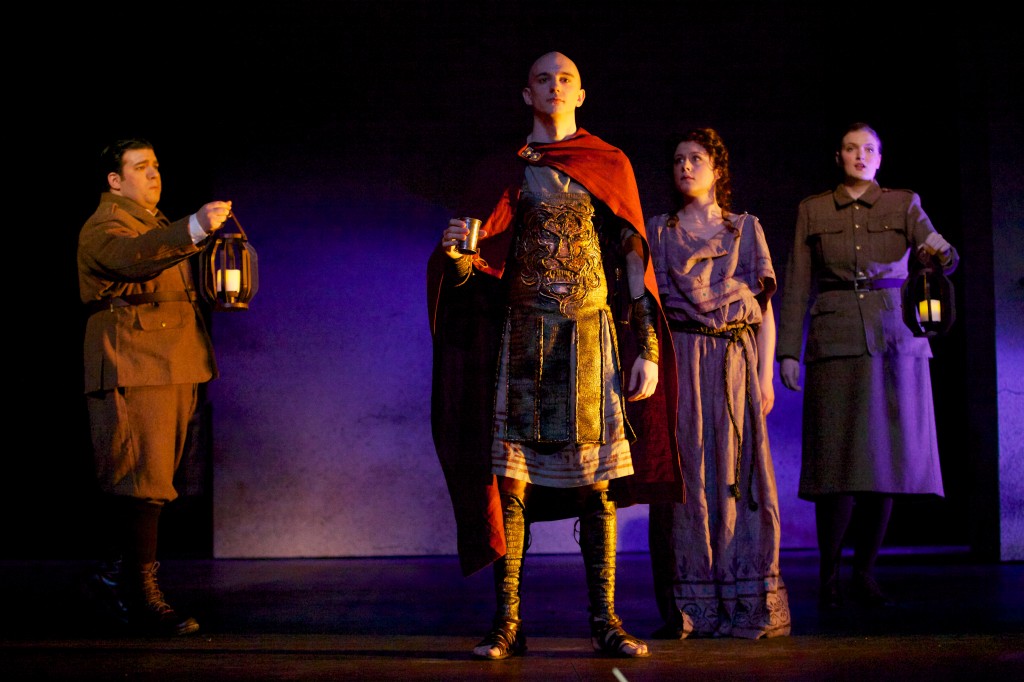 Benjamin Britten’s Rape of Lucretia is a simple story of morality and virtue that is drawn out to epic proportions. While The Boston Conservatory performs each role with gusto, the opera seemed tired, expiring long before the final note. With such high quality at the school, I suspect the source material is to blame with its odd narrators, lengthy exposition, and lack of exciting dynamics between characters.

Based on the play Le Viol de Lucrèce, Rape of Lucretia tells the tale of virtuous Lucretia (played with just the right sincerity by Jena Viemeister), wife of Collatinus (with a surprisingly serious turn by Simon Dyer). After Collatinus brags to Tarquinius, the king of Rome’s son (played with ferocity by Ian Bowling), about Lucretia’s faithfulness compared with the other soldiers’ wives, Tarquinius gallops off to test Lucretia’s chastity for himself. The prince arrives to find Lucretia spinning with her maid, Lucia (Sophie-Nouchka Wemel), and nurse, Bianca (a brassy mezzo with flair by Tascha Anderson). Unable to deny him hospitality, the three women are fearful to be along in his company, thus ending Act I on an ominous note.

Act II begins with Lucretia asleep in her bed and the slow approach of Tarquinius through the halls towards Lucretia’s chamber. He awakens her with a kiss, but, unsatisfied, pursues her for more. Of course, she denies him, and, in true operatic fashion, No Means Yes and he rapes her. The female servants joke about how late Lucretia is sleeping, providing off-color humor to the prior scene’s activities until Lucretia enters, upset and ordering a messenger to bid her husband home. Despite Bianca’s best efforts, Collatinus arrives home and finds his loving wife in despair, and she stabs herself in defiance of her earthly sins. And we’re led into a state of potential rebellion because of the young prince’s actions and we leave on a mostly unresolved note. And then we get the Biblical imagery and prayer. Suffice to say, the ending is unsatisfying at best, and near uncomfortable.

The Male Chorus (Salvatore Atti) and Female Chorus (Katie Abraham) frame the piece with their omnipresent dialogue and soliloquies on the opera’s action. Atti and Abraham had good voices, but without a clear frame of reference for them, their roles come across as mere plot devices. Stage Director Nathan Troup is thoughtful and knowledgeable, but I wouldn’t call this work accessible. He frames the opera with two World War II British officers surveying the remains of the ravaged landscape, presumably after the rebellion which occurs after the opera ends. But my question is why? Why do we care? It’s quite stagnant and even disastrous to have the two narrators so focused on “reconcil[ing] within themselves those things they cannot go back and change.” This decision denies these characters the opportunity to form meaningful relationships and connections with other people because they are so distraught and focused on reconciling their inner struggles.

That decision aside, Troup creates gorgeous stage pictures for this opera, surprising given the small ensemble of characters. For instance, at the beginning of the opera, underneath tan and dark brown sheets lie the main characters of the opera stories, and the sheets are slowly pulled back to reveal them frozen like statues. The actors pose in dynamic and sharp positions, which indicate their characters perfectly without saying a word and create vivid stage pictures. Such excellent use of positive and negative space are subtle touches which are rarely utilized in stage direction for opera, putting Troup a notch above the rest in terms of practiced directing talent and keen eye ofr the stage. Dyer’s Collatinus stands out because of his equal ease in establish bawdy commraderie with his male co-stars, but also his sensitivity in body and voice when interacting with Viemeister’s Lucretia. Viemeister grows on me, showing additional complexity to the virtuous women while maintaining outstanding vocal control and emotional range. I wish her opening scenes had been a tad more girlish, excited, and carefree; Viemeister’s Lucretia almost seems to sense her impending doom like the distant rumble of thunder. Bowling’s Tarquinius is a difficult role because he must do the unspeakable, almost without realizing the harm that he inflicts upon Lucretia. Bowling masters the self-assured air of the young Prince and carries the role with the unwavering self-confidence and the equally solid voice. Anderson’s Bianca was a surprising delight because of her rich lower register and her committed character; she played a nurse who acted and seemed timeless, an emotionally rich confidant for Lucretia.

Of course this production’s true stars were its technical components. Julia Noulin-Mérat’s scenic design is a masterpiece with simplicity and grace serving as strong pillars to hold the production up. The walls looked liked clean slabs of marble but moved with  ease to accommodate changing scenes with rapid succession, but, more importantly, gave the illusion of movement and depth without the need for expensive or elaborate scenery. Her keen eye helped ground this production in its shape-shifting and subtely which helped keep the focus on the actors, while establishing her creativity and brilliance as a designer. Equally supportive were the soft and subtle lighting design by Jen Rock. Whether illuminating the ruins and wreckage of a lost city and culture or the glooming light in Lucretia’s bedroom, Rock’s lighting portrayed mood effectively. Maestro Andrew Altenbach leads the orchestra and small ensemble with flourish, conscious not to draw out the dramatic and lingering just long enough on the important moments, to keep the opera moving at a steady pace, a thankful blessing for such an ominous and depressing piece.

While Rape of Lucretia wasn’t my favorite opera of the season so far, the strong technical elements combined with some excellent and committed performances kept the opera from languishing in the same vein as the heroine. The concept and framing device felt too intellectual, ambitious, and isolating, but provided for some noteworthy artistic decisions, like the frozen statues and the wonderful enactment of the opera’s noteworthy scene. Britten wrote an odd opera with which scholars continue to struggle. The ending is unsatisfying, but, that aside, the characters’ preceding emotional journeys make the opera worthy of saving for another hundred years at least.