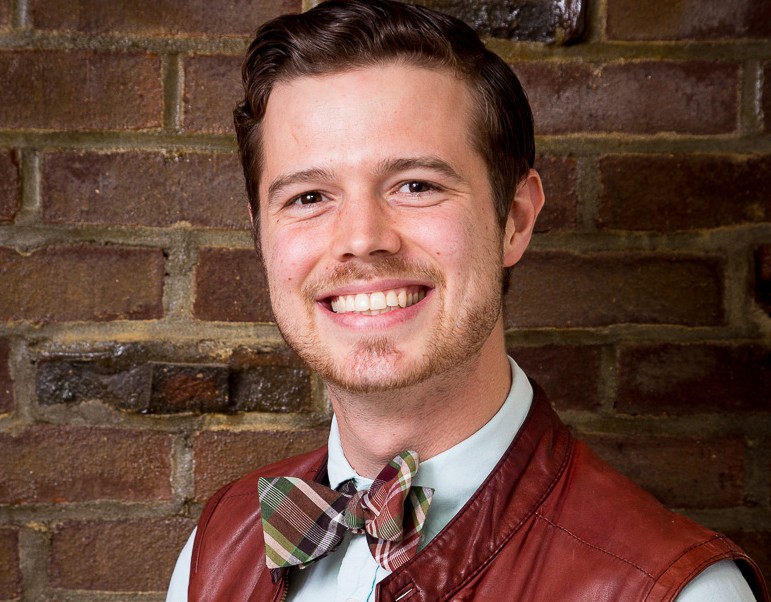 In the intimate Modern Theatre at Suffolk University, Tyler Kinney’s lavish Tudor costumes sparkled beautifully as a testament to the wealth and style of the period. With long flowing gowns, gorgeous furs, and excellent hats, richly-drawn characters emerged. For his outstanding work, Tyler is nominated for Actors’ Shakespeare Project’s Henry VIII for Best Costume Design. In his interview, Tyler explains how he became a costume designer, some of his designer influences (including some of his favorite places to shop for costumes on a budget!), and why he loves the Boston theatre scene.

Tyler, gorgeous costumes for Henry VIII. I loved your use of fabrics and colors. I can barely decide what I want to wear in the morning. What is your background in costume design? Theatre? What is your training and experience in Boston?
I have been working behind the scenes of theatre ever since middle school, where I painted props. I received my formal training at Emerson College, earning a Theatre Design and Technology BFA.  Since graduating three years ago, I have designed for a number of local theatres and universities.  I am also a costumer for Hollywood movies that film in town, e.g., American Hustle and Labor Day.

Talk to us about your concept for Actors’ Shakespeare Project’s Henry VIII. What did you research? What stuck out at you from the text?
It was the director’s vision to highlight the pageantry of this piece. It was an opportunity for me to visually portray the rise and fall of power. I also wanted to show the burden of high-status with heavy and dark costume pieces.

I researched all of the actual historical figures and contemporaries to understand the Tudor silhouette, and the codes of dressing for a king, duke, and clergy member.  In addition, I looked at period paintings to build a color palette and look for symbols to use.

Anne Boleyn or Katherine of Aragon. Who would you choose? Why? Talk to us a bit about their costumes (they were stunning, by the way!).
Both costumes played off each other.  The contrast between the two women was fun to play with. Katherine was Spanish, Catholic, and aging, while Anne had French court experience, was Protestant and a natural beauty.  If I had to choose one, I loved what we did with Katherine! The red of her gown tied her to the cardinals and the Catholic Church.  Tamara [Hickey] was willing to go all the way with her hair and makeup, beautifully designed by Amber Voner.

Did you have any constraints on the original costume design because of any of the performers? Did anything change or evolve as the rehearsal and production process continued?
The language of playing multiple roles was developed throughout the process.  It was a conversation with the actors about how I could help them make these quick character switches.

The Cardinal costumes needed to be practiced in and hemmed in order to be manageable.

What fashion trends or designers most influenced your costume design for Henry VIII? What about other works?
In 2007, I studied for a semester in London, at the New Shakespeare Globe under the marvelous Jenny Tiramani.  I was able to grab a drink with her when she was opening Twelfth Night/Richard III on Broadway right before I started to design Henry VIII.  Her attention to detail, passion, and love of storytelling has always been an inspiration for me.  It is exciting to see Shakespeare done in period (especially when is done by Jenny and her team).

In addition, my design mentor and colleague Rafael Jaen forever inspires me.  He taught me how to design fabulous costumes and execute them within a budget.

Talk to us about your favorite fabric/texture. Why is it your favorite?
For this show, I was all about the large pattern damask and fur of the Tudor era.  I wanted to include as much fur/faux fur as possible to convey the wealth of lords. My favorite texture, on this project, was the gold chains and bling.

If you could dress one person (celebrity or friend, or, I guess, a random stranger), who would you pick? What would he or she (or it) wear? Why?
I would love to dress an adventurous friend nominated for the Oscars and have a “Cher/Bob Mackie” moment.  I love feathers and metallic foliage; I would probably raid the fake flower market.

Costumes choose me . . .  I started as a scenic designer and, throughout my journey, I fell in love with having my designs move from hanger to the stage.

What is the last movie, play, or performance that you saw? What did you think?
I just saw The Seagull at the Huntington Theatre.  I really enjoyed how everything was tailored beautifully.

I also saw my first “Hasty Pudding Show” this year.  I laughed and smiled the entire time.  What a fun night of theatre, complete with the best can-can dance I’ve ever seen.

Would you rather have to be deaf or blind?
I have friends from both sides and they are fantastic people.  I don’t think I can decide.

Why do you choose to design in Boston? What makes the Boston theatre scene special? What are its challenges? Do you see the Boston theatre community changing at all?
I design in Boston because it has been good to me.  The Boston theatre scene is a real community, and I feel part of the family.  The challenge is making sure Boston talent gets the opportunities to work with visiting talent to learn and grow together.  I do think the scene is changing; I’m excited when I see people creating niche theatre that fills Boston’s entertainment desires.

Do you have any upcoming projects or productions?
I am currently waiting to see what is in store for next season.  I am excited to work with new people, and also familiar faces!

Do you have anything else that you would like to share with our readers?
My favorite places to shop for costumes are: Bananas in Gloucester, Great Eastern Trading Company in Cambridge, and K&G will always save you in a pinch.