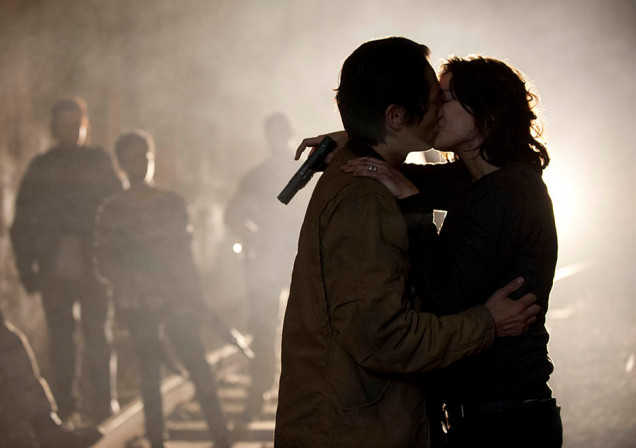 The Walking Dead: Us

There’s an expression everyone gets taught when they’re children: two wrongs don’t make a right. On The Walking Dead, however, it seems like 47 wrongs do make a big sappy, tear-filled happy right. After three episodes with the lead character, Rick finally makes an appearance as he and Michonne make their way done the train tracks towards the promised sanctuary at Terminus. Michonne has transitioned to full on soccer mom, joking around with Carl with nary a care in the world. And judging from Carl, whatever is in those chocolate bars makes your voice drop about three octaves overnight. At least the audience gets to see this trio again, Rick struggling with his failures as a leader, Michonne transitioning from cold blood warrior to caring warrior-oh wait they’re gone already. Next week I guess.

Glenn and Tara are still cooped up with Abraham Ford, Rosita, and Kenny Powers Eugene the scientist. After Eugene, self-proclaimed saviour of mankind, shot up their truck, the quintet is trudging back towards the general area of where Maggie might be, maybe, because true love. After a delightful dinosaurs-as-zombies conversation, Tara falls and sprains her ankle. While this would immediately lead to the downfall of any slasher movie character, but sense The Walking Dead loves to set up really stupid decisions, she lives to limp another day.

Glenn spots the sign for Terminus where Maggie left a message and he immediately takes off running. The rest of the group will eventually catch up, because running a marathon in riot gear is hard, but nothing can stop him from heading to the sanctuary now. The train tracks lead to a pitch black tunnel, with the sounds of Walkers echoing out from the concrete. Glenn gives Eugene is riot gear so Abraham will stop being a dick, while he and Lily head into the tunnel despite the fact that she can barely walk and THEY CAN CLEARLY HEAR HUNGREY ZOMBIES WAITING FOR THEM. The two of them reach a section of a tunnel where the roof caved in leaving a half dozen Walkers trapped in the rubble. It’s a harrowing set up, and raises all sorts of question about if these where people caught in a trap. Glenn notes that the blood is fresh, and scrambles over the rocks to see if a reanimated Maggie is there. Instead he finds a whole pack of very hungry Walkers. Because these characters are idiots, they rig up a flash flight to distract the apparently cat-like zombies while they climb down the rocks. And Tara’s bad ankle gives out and she gets stuck between rocks. Glenn, determined to save the woman indirectly responsible for his father-in-laws death, wastes his ammo on a quarter of the zombies, and pulls out his knife to feebly attack the rest. This is the perfect time for Abraham, Rosita, and Eugene to show up from the other side of the tunnel in their hot-wired truck, with Maggie, Sasha, and Bob in tow. They unload on the zombies and Glenn and Maggie reunite in a scene so lovely and tender that is almost makes the audience forgive the fact that this entire thing makes little to no sense. True love, making up for plot holes since film was invented.

After leaving the tunnel, the newly enlarged group makes it to Terminus, which appears to be a slice of heaven on zombie infested earth, complete with a barbeque. Glenn and Maggie are back together, surrounded by sunflowers, and with steak for dinner. Next week’s finale is going to be such a bummer when this all goes straight to hell.

People Champion Daryl Dixon has reached his low point and teamed up with the group of house raiding assholes who, get this, turn out to be assholes. They operate on a strict “finders keepers, losers weepers” system of organization and justice, which lets a wiener named Len get under Daryl’s skin in about eight seconds. The group heads down the train tracks and find a group of warehouse to make camp inside. In the morning, Len accuses Daryl of theft, which leader Joe uses as an opportunity to test the new recruit. Joe knew the Len was lying, while Daryl remained truthful, and as punishment for Len’s misdeeds he gets subjected to a brutal beating. That’s what you get for messing with People’s Champ. When the group later prepares to leave, Daryl comes across Len’s body with an arrow sticking out of his head, highlighting Joe’s brand of frontier justice. Joe reveals to Daryl that they are actually tracking Rick out of retaliation for killing that asshole sitting on the toilet way back in the house. And they soon find the wrapper to Carl’s chocolate bar, and a sign pointing to sanctuary.

Daryl’s arc this season is very similar to Michonne’s, as they are returned to their lone wolf status and are forced to confront the reality of how much being part of the prison group changed them. Daryl reverts to being kind of jerk to survive as part of a group of huge jerks, but then takes it one step further by actively squashing the more noble side of his personality when it threatens to push through. When he finds Len’s body, he grabs a nearby sheet and moves to cover the dead man, before instead throwing the sheet aside. Daryl had to be tough to survive before the Walkers started roaming, and now he’s become afraid that his relatively new conscience will only be a weakness. And around people like Joe and his gang, Daryl is right.

Joe continually tries to make Daryl see that for people like them, they just need a couple tiny rules and constant threat of merciless violence to survive, but actively caring about other people will just get in the way. Joe makes his cynicism regarding Terminus instantly clear, arguing that men like him and just too dirty, too bad, to gain acceptance into any promised sanctuary. It seems as though everything’s leaning up for a clash between the assholes and the prison survivors when everyone nears Terminus, and while likely force Daryl to decide which kind of person he wants to be. Go back to be a lone wolf, or give into his nobler inclinations and be part of something bigger.