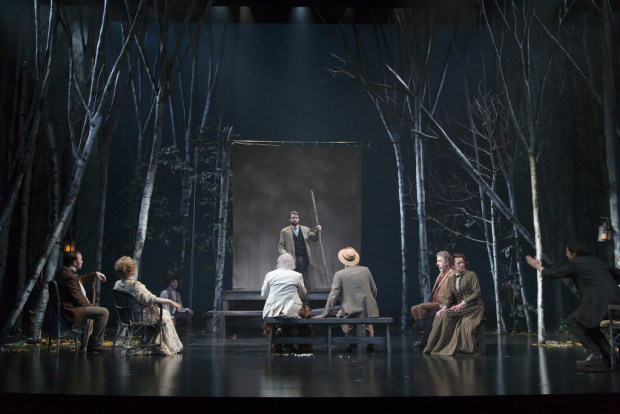 Chekhov wrote The Seagull over a hundred years ago for a Russian audience longing to laugh in the misery of their daily lives. This month, the Huntington Theatre Company brings this classic to their stage with a keen sensitivity to Chekhov’s purpose. While some reviewers and audience members may disagree, I found the play wonderfully hilarious as people searching, yearning, and fighting for their dreams, despite the hopeless limitations of their daily lives. It’s some of the original modern “dark comedy,” and it’s not everyone’s tastes. However, the Huntington makes the play so deliciously good with nuanced performers from some very talented performers and a gorgeous set (yes, I recognize that most of Russia should not be this picturesque) that you can’t help but long to live in a world long ago and far away. With sharp reminders of our pursuit of art for art’s sake, the deep longing for dreams unachieved, and the conflict between the old and young, the Huntington’s The Seagull soars as some sharp commentary as timely as when Chekhov wrote the piece.

It’s not hard to explain why Chekhov is historically misunderstood. His work is dense, riddled with self-deprecating characters, and border on the depressing. Yet Chekhov (and the Huntington’s beautiful production) find the life in living the lesser life. These characters, though some were once wealthy, do not live an extravagant life. They are modest, humble, and earnest (with some shading below the surface). The Huntington, with the help of subtly brilliant director Maria Aitken, strike the balance of symmetries to make The Seagull a genuine masterpiece of storytelling. To begin, this production begins and ends in beauty. Aided by the astonishing and vibrant lighting design by James F. Ingalls, Ralph Funicello’s scenic design is breathtaking. From the rise of the curtain, we are treated to the barren and mysterious woods of Russia with the shining sun and the soft touches of a nearby lake. Their brilliance is really spectacular, but it is in Acts III and IV when their synergies create a truly transcendent piece of art with the setting sun illuminating the darkening study and casting shadows across parts of the room. Yes, Chekhov would be nothing without his landscape and setting; the Huntington’s production surpasses expectations because of the brilliant designers and their collaborations.

The story revolves around the romantic and artistic tensions between the old and the young. Young Konstantin (played by the increasingly charming Morgan Ritchie) wants more than anything to a successful symbolist playwright, but he is stuck in the country-side. His mother, Irina (played by the musical and stunning Kate Burton), is a fading actress who attempts to cling to her long-lost acting career and fame, partly by dating the well-known writer, Trigorin (played stiffly by Ted Koch). The catalyst is The Seagull herself, the young actress and ingénue, Nina (played with beautiful and subtle transformation by Auden Thornton). The dynamics among these four characters and actors alone are enough to see this production. The twists and pulls, the arguing and struggle, and the fights and reconciliations make this a masterpiece in acting and storytelling. While many audience members can enjoy the play for what it says about art and life, The Seagull is also a wonderful story about family, dreams, and the desire to create something worthwhile and memorable.

Burton is the perfect Arkadina; you never quite know when her Irina stops acting and starts living. With graceful presence, a memorable and musical voice, Burton plays all of those around her, including the audience, into the palm of her hand. Her manipulation is subtle, but poignant enough for the audience to realize only at the last moment that there is more to this character beneath the surface. Chekhov was famous for his “subtext” and Aitken coaxes and coaches these unspoken moments and texts from her actors with ease. My favourite scene, however, is between Burton and her on-stage (and real-life) son Ritchie when they argue over Konstantin’s work and his desire to go to Moscow to become a playwright. Both actors’ understanding of their subtext along with the unmistakable chemistry between them make the scene vibrant and exciting to watch, always unsure of the next moment, glued to the action like a soap opera without the martini glasses being thrown. No, in Chekhov, people throw words, often carelessly but they leave sharp reminders to the audience (and the other characters).

While Trigorin is arguably “Chekhov’s greatest male role,” I would disagree. Perhaps because I understand the challenge to make the man seem interesting when he waxes poetically and rarely exhibits any of the charm necessary for him to get away with half of what he does (not that he does half as much as Burton’s Irina).  In many ways, Koch is rather dull. He plods through the page and a half-long monologue, hardly without lifting or punctuating anything in particular in the text. He has some nice moments with Thornton’s Nina, but I rarely understood his appeal to her, especially when she was so delightful. Thornton is able to light up the stage as a Nina should, and she dazzles with her wide-eyed innocence which makes a perfect dichotomy to Burton’s older and more mature Irina. This conflict of ages makes for some of the play’s funnier and more awkward moments. Which I suppose brings me to the tone. As I mentioned, people are often afraid to laugh at Chekhov; some people consider it too akin to Schadenfreude, others don’t understand it. Aitken and her cast understand that Chekhov’s humor is situational; it is the uncomfortableness and awkwardness of living near and understanding someone. The rubbing of elbows, if you will. It creates friction and tension which create the subtle and undeniable moments of comedy. Don’t be afraid to laugh; Chekhov *wanted* you to laugh and enjoy life’s delicious moments of unintentional comedy. Even while we are dying, there is humor to be found in how we live each day of our lives. /End rant.

Despite my praise for these four leading artists, The Seagull is an ensemble show. I found most of the supporting cast to be a mixed bag. Whether underutilized (like Nancy E. Carroll’s morose Paulina) or confusingly one-dimensional (like Don Spark’s Ilya), the problems lie in both the text and the casting. Carroll did the very best with what she was given (making the “flower scene” as memorable as any), but she was given too little (Chekhov’s fault, not the production’s). Marc Vietor’s Dorn is surprisingly forgettable, missing the subtext for much of his character and his relationships with both Paulina and Paulina’s daughter, Masha. Meredith Holzman surprises as Masha, walking the fine line between a caricature Daria and her own interpretation of the sullen and hopelessly eager Masha. Holzman, like Ritchie and Thornton, succeeds because she finds the hope within her character’s story and continues to fight and strive for it throughout the play. This unflinching resilience is exciting and interesting to watch. The problem is that many of the older actors seem to have determined that their stories had already expired and that the circumstances were beyond their control, and played their parts as such. Nothing can be less interesting than a Medvedenko (played by the underwhelming Nael Nacer) who has realized that he’s already lost Masha, his eventual wife, before marrying her. Thomas Derrah has some nice moments as Sorin, but I never felt quite like he had a story or a stake in the action. Perhaps if he had died at the end (a choice which I’ve seen in a few productions), it would give him more of an arc, but Derrah seemed as willing to carry on as any of them.

No, this production is supported and held up by the leading characters. While Holzman has some fine acting moments, they are rarely with any of her equals in talent, leaving Ritchie, Burton, and Thornton with the interesting scenes and moments to let this play fly. Thankfully, The Seagull is just as wonderful, thrilling, and interesting when the brunt of the work is borne by Konstantin, Irina, and Nina, respectively. While it is easily one of the best productions of The Seagull which I’ve seen, I think it was missing something with such a lukewarm supporting cast, which created awkward jumps from one star scene to the next.

Before I end, I do need to question Aitken’s choice for the ending. I felt that it was too much. Too much was said, too much was done. And I question the choice and interpretation. Because there is so much room for subtext and the desire to explore it, I feel that it’s better left unresolved. Like many of the Huntington’s The Seagull less is more, unless you’re talking about Kate Burton. Then, more is always better.