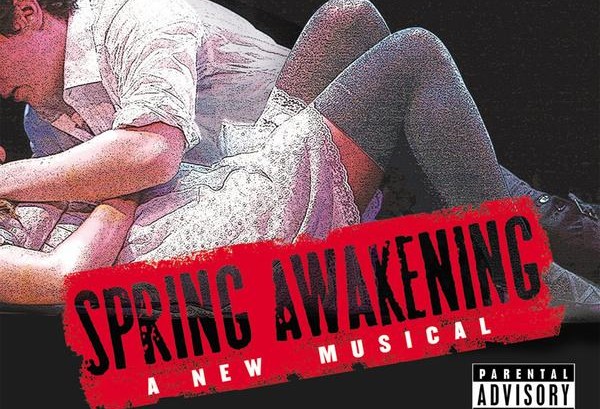 It’s refreshing to see a show like Spring Awakening get so much play in Boston area theaters. Even ten years ago, our theater scene would never have so accepted a musical so open about adolescent sexuality that uses actual teenagers in overtly-sexualized dramatic scenes. The Company Theatre of Norwell, the one of the few semi-professional theaters in the South Shore (which is easily the politically conservative region of Massachusetts), presents a production of the musical shortly after its teen academy production of Rent. In terms of sheer production quality, the Company Theatre presentation of Spring Awakening is a worthwhile venture. I have some reservations regarding a few character choices, and there are some problems with execution of the book material, but the music and choreography hold their own against the original Broadway production.

Spring Awakening, with a book and lyrics by Steven Sater and music by Duncan Sheik, is a 2006 musical adaptation of Frank Wedekind’s late 19th century play of the same name, a play so ahead of its time in its unapologetic portrayal of teen sexuality that it remains controversial to this day. The musical’s plot stays largely faithful to that of the original play, accounting the sexual awakening and psychological struggles of a group of teenagers living under the repressive power of the old German bourgeois. It’s a music-heavy show, with the characters continually breaking out into contemporarily-written monologues of rock, all led beautifully by music director Michael Joseph. From the opening chord of the first number, I felt a sense of raw clarity from the orchestra and a distinctive voice from each instrument. It sounds as if the orchestrations have been slightly stripped down but I can’t be sure. It may just be that Joseph has gotten such precision out of the musicians that the overall tonal quality of the orchestration sounds clearer and simpler. The orchestra is right onstage with the actors in this production, which brings out the theatrical rock-concert feel of the musical, but, unfortunately, the musicians’ lights prevent a full blackout onstage, which upsets some integral moments in the drama.

The cast sounds universally vocally impressive and well balanced. Notable singers include Jessy Rowe as Wendla, a naïve girl, who releases her character’s internal frustration with a bellowing voice early in the play, and sings with a growing, passionate ease as she learns and evolves throughout the evening. Christopher Spencer as Moritz, a troubled student, evokes a brilliant sense of tension of spirit in the intensity of his voice without creating any vocal strain. Caitlin Ford as Ilse, a runaway, and  Athena Horton as Martha share a terrific energy in character and in voice that makes them stand out with experience and pain. Jose Merlo as Georg, a student obsessed with his teacher, gives a surprisingly notable performance despite having a smaller part, with perhaps the greatest vocal energy and excitement of anyone in the cast. No one gave a disappointingly-sung performance, but microphone feedback problems throughout the night upset some of the blending and silenced a few cast members.  Richie DeJesus as Otto, for example, sounded like he was doing some good musical inflections, but his microphone was broken the night I saw the show and I could never hear him well.

Corinne Mason’s choreography was wonderfully matched with the score. It’s difficult to live up to Bill T. Jones’s work on the original production, but Mason holds her own against him. I felt a running symbolism in her choreography throughout the performance in that it began filled with tension and physical constraint early in the evening and morphed into more graceful ebbing and flowing as the characters explore their sexual tensions. It was an entrancing evolution that reflected the arc of the drama, especially with those early tenstion-filled dances, which were gripping with the characters’ frustrations.

Sadly, the non-musical portions of the show have a lot of trouble. Spring Awakening has some book problems that aren’t the fault of any production. It tries to remain faithful to the poetic lilt of Wedekind’s original play, but the musical is based on an English translation of Wedekind’s German, so book scenes sound more as if the book-writer awkwardly translated them from German. Granted, the lilt of the dialogue is largely intentional, as we’re supposed to feel the stunning effect of jumping from 19th century dialogue into contemporary-rock-internal-monologues almost simultaneously. The trouble is that the dialogue never sounds natural, especially as the show panders to our contemporary social sensibilities in portraying its own era. The show fixates on fourteen year olds not knowing where babies come from, and though that situation is present in Wedekind’s original play, the writers present it as if we’re supposed to laugh at 1891 society for being so naïve compared to our own. It’s horribly ironic considering that the writers’ purpose behind the rock score is to root the 1891 drama in a kind of familiar sexual struggle to which a modern audience can relate.

The Company Theatre production unfortunately exacerbates the lack of naturalness in the book scenes by rushing them. The pace of these scenes is so fast that the actors don’t have time to develop believable connections with one another. This is especially problematic in the scenes between the primary romantic couple, Wendla, played by Rowe, and Melchior, played by Mickey White. Their scenes demand time for the actors to reach a desperately intimate connection that emerges from almost nowhere. One scene with a whip is already quite awkward in the text, and, with this pace, it plays almost unintentionally comically. The entire musical runs less than two hours, but I think an audience would accept a two-and-a-half-hour-long production if the acting were lively.

Pacing issues aside, director Zoe Bradford makes some fresh choices with staging, refreshing for a musical for which so many productions aim to replicate the original step-by-step. There’s a striking scene between Ilse and Moritz that is usually follows a traditionally simple and abstract staging, but, here, the actors interact with each other realistically and bring a new outlook onto the scene. Perhaps this production’s most unique scene is an intimate moment between Melchior and Wendla. This scene is controversial for some production’s use of nudity, and though there is little nudity here, the actors utilize a highly effective turntable that abstractly immerses the entire cast into the scenario with entrancing discomfort.  The scene feels almost rape-like, capturing an element of Wedekind’s original play usually lost in the musical version. It fuels complication into Wendla’s characterization and makes her journey in the second act more engaging.

The one major concern I have with characterization in this production is that of Hanschen, an eccentric gay student. Hanschen is a character who has deeply resonated with me as long as I’ve been familiar with this musical. He has some genius lines late in the play about how to exist in an unjust society, lines that I personally have taken to heart and by which I strive to live. Brendan Paine has a terrific look and a great voice for the part, but he plays the character as comic relief. There is little emphasis on Hanschen’s wisdom and will, and his sexuality comes off as creepy and perverse, not a celebration of its own freedom and eccentricity.

My greatest qualm with Paine’s Hanschen is in that late scene with his brilliant lines. It’s a scene that features another gay character, Ernst, played by Roger Dawley. Up until this point, Dawley had been one of my favorite actors in the performance, playing his shy character with a cute and genuine subtlety that made the entire audience want to reach out and give him a hug.  But his scene with Hanschen, which I’ve always loved for its tender portrayal of a sweet gay romance amidst the heterosexual tension of the rest of the musical, is played for laughs. Dawley loses his subtlety and gives an exaggerated grin to the audience while the robotic and perverted Hanschen seduces him, as if Ernst doesn’t completely want to be there. It feels rape-like, almost like the earlier scene with Melchior and Wendla, only played for laughs. And there is nothing funny about gay rape. The scene plays as a satire of the one with Melchior and Wendla; are we supposed to be laughing at Hanschen and Ernst because they’re doing what the main couple did, only they’re gay? That’s the only reason I can think that this scene was re-imagined as comic, that it’s too difficult to take seriously the romance of a couple of gay teenagers. It solidifies the hurtful characterization of Hanschen. Hanschen should be a manifestation of the possibilities of genuine self-love and the ability to survive in a sexually oppressive society, not a creepy rapist.

Luckily, after this scene, the production makes a complete 180 and the final thirty minutes are wildly overpowering. The musical becomes highly metaphoric and broadly poetic at its end and in the past I’ve had difficulty accepting the final songs, thinking them to be difficult to decipher and emotionally unjustified. But here, the emotion behind the songs is so genuine, the lighting brilliantly supportive, and the finale played with such effective understatement. I’ve experienced the show’s final moments with a newfound appreciation of their emotion and splendor. With all my grievances against elements of this production, its final scenes are so beautiful and profound, it makes up for what had happened earlier and brings fresh life to an already riveting musical work. It’s worth the drive down to Norwell.