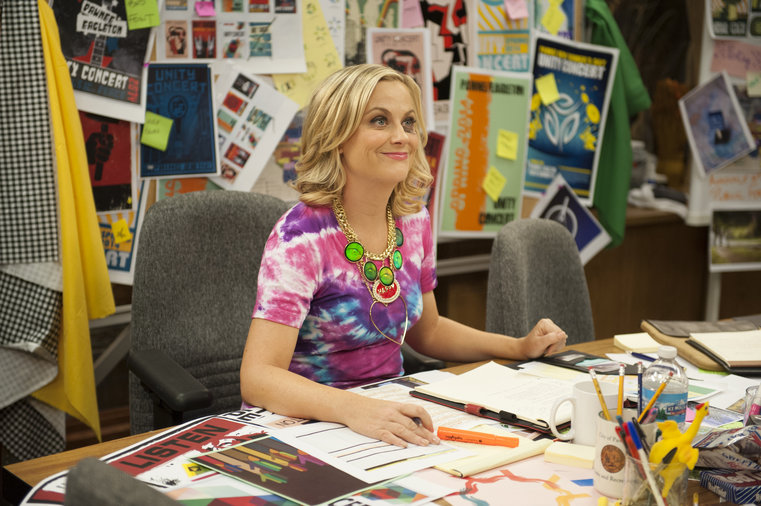 Ron has a son! And not even he can keep from baby talking to him. He can, though, impart some of his Swanson wisdom. Frustrated with government life and people getting into his business, Ron takes off with his son and finds an empty floor in city hall. He tells a construction crew that he’ll do their work for them and then basks in the silence and isolation.

Meanwhile, nothing can go right for poor Leslie Knope, and it’s getting pretty frustrating to watch. Everything she tries to do goes horribly wrong and everybody continues to hate her. Yet, she chooses Pawnee time and time again. Yes, she’s loyal and dedicated, but I think she should have gone with the other job.

Leslie has been tirelessly trying to smooth things out between the Pawneeians and Eagletonians. In a Reganesque move, Leslie’s latest attempt is to tear down a wall dividing a park into a Pawnee side and an Eagleton side. Obviously it ends in mayhem when the demolition unleashes a hive of bees. For some strange reason, the convenient answers is that they happened to be closer, mostly Eagletonians are stung. Jamm is also stung, in the mouth, because he was busy laughing at the Eagletonians. While Leslie is apologizing to the victims in the hospital, an Eagletonian reporter catches her in a supposed “gotcha” moment. Things spiral and soon Leslie is the face of the Pawnee secession.

Ben and Tom have been busy with their new business venture. Tom’s caught the eye of an investor who says Tom should pitch him an idea. While Ben wants to pitch something about dry cleaner chemicals, Tom ends up pitching a risky idea about opening a restaurant. They get the deal, and Tom somehow ends up as Ben’s boss.

Parks and Rec keeps talking about how great Leslie is and how she’s destined for something bigger than Pawnee and the Parks Department. This could have been a big step towards that future they keep talking about, but instead she turns back to Pawnee. That would have been a noble gesture back when she was writing books about how much she loved her town, but things keep getting worse for her in Pawnee and she keep getting more and more bitter. It might be time to move on.