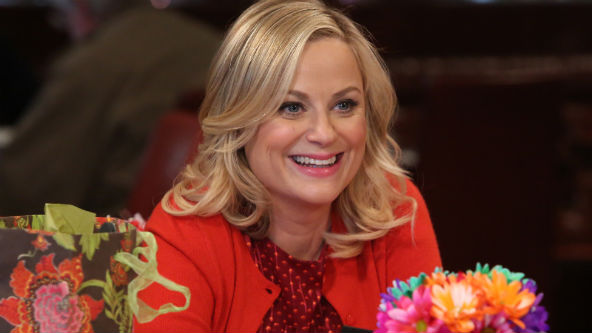 I just lost a little bit of respect for Leslie Knope. Riggins beats Saracen every time. Seriously. What is she thinking? This episode of Parks and Rec, “Galentine’s Day” was pretty hilarious and there was so much going on. We got a nice surprise when Ann made and appearance. Chris wasn’t around, though. He was too busy cheering women on as they delivered their babies. Very convenient.

Leslie has been feeling lost without her best friend. At first she didn’t want to celebrate without Ann, but she knew she needed a new best friends. So, she grabbed April, Donna, new Ann from Eagleton, Shawna Malwae-Tweep, and Ethel Beavers to an impromptu brunch. Little do they know, Leslie’s rating them to see who will be Ann’s replacement. She somehow ends up with poor oblivious Shawna who talks about how she learned to smile through the pain. She’s a little too dumb for her own good, though.

Leslie has to run out, though, when she learns that Ann had her baby. She gets to Ann and talks about how much she misses her and how there’s no one else like her. Ann tells her that Leslie needs to allow some time before a new friend will grow on her. Leslie also learns that April and Donna lover her, too, in their unique ways. She gets back to Pawnee and find that they have a gift for her. They know how much Leslie’s been missing Ann, so they gave her a talking stuffed bear with a message from Ann. April has her own special message as well.

Meanwhile, Ron was just trying to have a day without kids, but he ended up getting stuck with Andy the man-child. Andy falls off the monkey bars and loses a tooth. Ron is stuck taking Andy to the dentist and basically parenting him all day. He realizes the importance of being a father, though, and calls Diane to give her some time off.

Ben and Tom are trying to rent some tents with the help of Larry. The man they’re working with is a real jerk, though, and seemed to own every punny tent rental place around. Larry saves the day, though when he finds all of these code violations, and they back the tent guy into a corner.

That’s not all for Larry, though. His and Ben’s bromance are in full bloom. They’re getting along nicely, and Larry is even helping him cover up how much Ben really likes him though. Ben finally stands up to everyone, though, and tells them how much he likes Larry in an awkward Dead Poet’s Society moment. They don’t take it well and Larry really doesn’t help matters.

This was quite a full episode of Parks and Rec. It was actually great to see Ann again. Plus, Larry and Ben are incredible together. I hope we get to see more of them together.