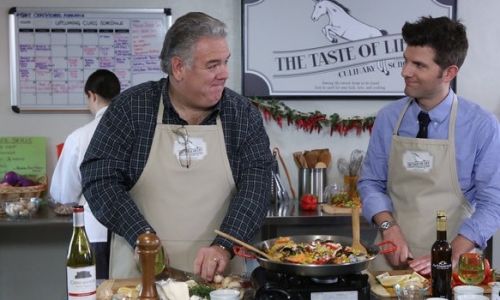 Parks and Rec is back! And love is in the air, at least for Ben and Larry. When will Ben ever learn he can’t out gift Leslie? It was a noble try, Ben, but you’ll never win. She’s just too good.

In order to beat Leslie at her own game, Ben enlists Larry’s help in planning the ultimate romantic anniversary day. And, he plans it the day before their anniversary so she’ll finally be the one to make the surprise face. Oh Ben, sweet Ben, thwarted at every turn.

Leslie is busy trying to put a positive spin on the Pawnee-Eagleton merger that everyone hates. It must be frustrating that everyone always hates everything she does. She’s found a couple that has been married for 50 years. The man is from Eagleton and the woman is from Pawnee. Leslie thinks they’d perfectly represent how great things could be. The only problem is, these two do not like each other. They are not the happy couple she envisioned. Plus, they only got married during the Cold War when they thought they were going to die anyway.

So, Leslie puts off meeting with Ben to continue working and Ben cooks, tangos, and has a couples’ massage and an Enchanted carriage ride with Larry. And it is incredible. These two are great together. Why hasn’t this happened earlier?

Meanwhile, April is having a hard time in her new role as a boss at the animal shelter especially because Donna is not taking her work seriously and April is uncomfortable confronting her about it. So, she writes an anonymous review on yelp, though Donna quickly figures out it was April. Donna makes her suffer, though, when she pretends that she thinks it was Kyle and fires Kyle, despite not being his boss. In the end, April and Donna come to an agreement and work things out.

The yelp review gave Ron an idea, though. He quickly goes to his computer. He doesn’t go to write anonymous reviews, though. He looks up addresses and sends personal letters to all the things he hates.

Leslie and Ben finally realize that a couple of old people aren’t they way to show people how great the future will be for the people of Pawnee/Eagleton, they should be using the youth. “The children are our future,” after all. So, they gather a group of young people, including the always wonderful Craig. Watching Leslie and Ben try to talk like young people was uncomfortable. I guess I never realized they were old. The group does have an idea, though. They want to set up a music and arts festival, which leaves Leslie speechless and crying. Plus, Ginuwine might be there!

In the end, while Leslie is excited about Ben’s scrapbook of his special day with Larry, she ends up victorious when she presents him with a replica of the Iron Throne. She should have stopped while she was ahead, though, before talking about a starship.