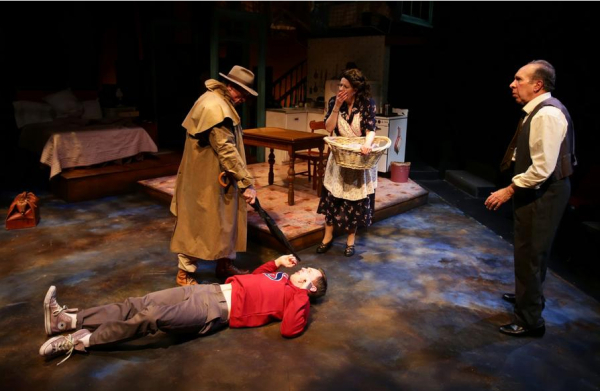 Death of a Salesman, by Arthur Miller, needs no introduction. It is an American classic which resonates as easily today at The Lyric Stage in Boston as it did fifty years ago during the height of the American Dream. The Lyric Stage needs no introduction: a Boston My Theatre favourite company for its outstanding show selections, innovative community outreach, and consistent successful and talented performances. And its production of Death of a Salesman, directed by the always brilliant and smart Spiro Veloudos, easily compares the company’s other successes. However, this production diverges from the others that I have seen on the Lyric’s stage. The Lyric’s Death of a Salesman has heart and poignancy that strike a chord deep within you and lingers long after the house lights come up. Veloudos has assembled some of Boston’s best, but, more than that, he has directed the show with such empathy and infused the production with such continued importance that the show emerges as a performance of great ideas and great men (and women).

Death of a Salesman chronicles the journey of Everyman, Willy Loman (played by sincere aplomb by Ken Baltin). Like Loman, it is hard to pinpoint Baltin’s charm, and success as a leading man. He is wonderfully vulnerable as the aging salesman who struggles to keep his last wits about him as his world falls apart around him. And it’s surprising that we enjoy going on the ride with him, considering that most of us know the inevitable ending. Yet, Baltin makes the journey, in a word, enjoyable. His ability to struggle and fight for the last moments of happiness and success are heartbreaking and poetic. His actions, like Loman’s dreams, are insubstantial and epic, in the same instance. Baltin goes to the extremes in such a relatable and comprehensible way that you can’t help wanting a different ending for him and his family.

While Baltin could easily steal the show with his attention and expression of every moment of Loman’s life within his performance, his on-stage family easily matches and complements him in each moment. I have to admit that I came to the performance for the other Boston legend, Paula Plum, who plays the devoted and powerful wife, Linda Loman. Behind every great man, there is an even greater woman. Plum’s Linda is no exception. Every moment seems effortless but purposeful as she tries to keep the Loman household a functioning machine despite the many outside forces that threaten to destroy everything that she has worked so hard to preserve. Plum is a force with which to reckon. Her strongest moment, however, are her softest. The intensity bubbling underneath the surface when she can barely contain her warmth and heart for Baltin’s Willy show a woman who has chosen not only to be a housewife, but also be the structure which holds the house and its inhabitants together.

My one surprise was how much I loved Kelby T. Akin as Biff Loman. Biff has an understatedly difficult transformation to make. While the play is told both in the present day and through flashbacks, Biff’s journey is told with the most informative and influential changes occurring toward the very end of the play. Once a high-school star athlete, Biff has since realized, like so many of us, that we are more than our parents’ wishes. Akin is able to play both young and older Biff with ease, a healthy and active high schooler, along with the pensive and confused young man. He slips between scenes as the flashbacks tell his journey. In fact, his gradual evolution makes me wonder if Miller may have intended the “death” to be Biff’s. While Baltin tells the slow death of his “dreams” for himself and his sons, Atkin struggles, fights, and “dies,” emerging as an independent, though jaded, young man in a society and economy that does not support him and his decisions. Such weight and intensity cannot be underappreciated in today’s current market. Perhaps I am more of the age to understand Atkin’s Biff rather than Baltin’s Willy, yet each resonate on their levels, in their own ways. My favourite scene was their confrontation with Atkin’s Biff begging for Baltin’s Willy’s acceptance, a longing to connect despite opposing aspirations and expectations. Goosebumps rose across my arms as I realized that these men would never understand or respect each other, at least not in either man’s lifetimes.

Joseph Marrella’s Happy Loman was the hardest for me to understand and relate. Even now, I’m not sure what to make of him. While he had strong moments, connecting (or trying to connect) deeply with his brother, Biff, and father, Willy, Marrella missed something along the way, at least for me. Perhaps this disconnection is inherent in Miller’s work; perhaps, Marrella’s Happy lacked the emotional journey that the rest of the family seemed to be on. A talented and smart performer miscast? A missed opportunity or moment to define the second brother away from the limelight? Perhaps the others worked on a different level, so that Marrella was not bad but just not at the others’ levels.

The supporting cast was astounding strong. With so many opportunities to act in outstanding productions this spring, it is always surprising to me when talented performers join a production in smaller roles. Perhaps not surprisingly, they shine, even in these smaller roles, a testament to their talent. Victor L. Shopov’s Bernard is a cannon of personality and a vibrant addition to the cast as a foil to Atkin’s Biff. He makes the most of his scenes with the deliberate purpose of a young man determined to make something more of himself. To tell a character’s story in a few dozen lines is an actor’s talent and an audience’s pleasure. Equally successful is Will McGarrahan’s Uncle Ben, the brother who serves as a foil for Baltin’s Willy. McGarrahan’s entrances were welcome surprises, much like a long-lost brother returning from exciting travels. McGarrahan understands his character as a person and as a plot device, and he perfectly melds the two into a cohesive unit to delight with his stories and astound with his presence. Finally, Omar Robinson’s Howard Wagner is successfully memorable as Willy’s boss, perfectly portraying a businessman who is stuck between his empathy for Willy’s plight and his own desire not to be pulled down with Willy’s despair and tragedy.

These characters bump, embrace, and fight on the intimate Lyric Stage, which is gorgeously orchestrated by Veloudos. He keeps the play moving as such a steady pace, despite its two-and-a-half plus hour show. Of course, Veloudos, while an incredibly intelligent director, would be nothing without the outstanding production team that he assembles to support the Lyric’s work. One of the company’s strengths is its production teams’ cohesiveness, and ability to use their weaknesses (yes, their stage is intimate, read: small) and turn it into a strength. Janie E. Howland has quickly become one of my favourite set designers for her ability to adapt to a play’s script to fit whatever space with which she has to work. Her synergy with Veloudos cannot be underestimated. Equally impressive is 2013 Boston My Theatre Award Nominee Karen Perlow’s lighting design. With multiple scenes and locations to illuminate, Perlow evokes time and place with soft palettes of color, displaying not only the location but also mood with her designs.

The cohesive unity of the Lyric’s Death of a Salesman makes it a solid Must See. Baltin and Plum’s chemistry, along with Atkin’s emergence as a sensitive and talented performer, make this a beautiful work of theatre with themes and ideas which remind me why such great writers and artists are timeless. The Lyric (as previously mentioned) has assembled an outstanding 2013-2014 Season, one of Boston’s best, and they finish their season with two wonderful and diverse selections.

Next, Courtney O’Connor directs the New England premiere of Victoria Stewart’s Rich Girl, a modern take on the classic play and film The Heiress, a clever and evocative comedy about men, women, mothers, and money. Finally, the Lyric finishes its season with Sondheim and Lapine’s Into the Woods, the musical which questions what happens when you get everything you want and seek to live “happily ever after.” You can bet that you will see me there.