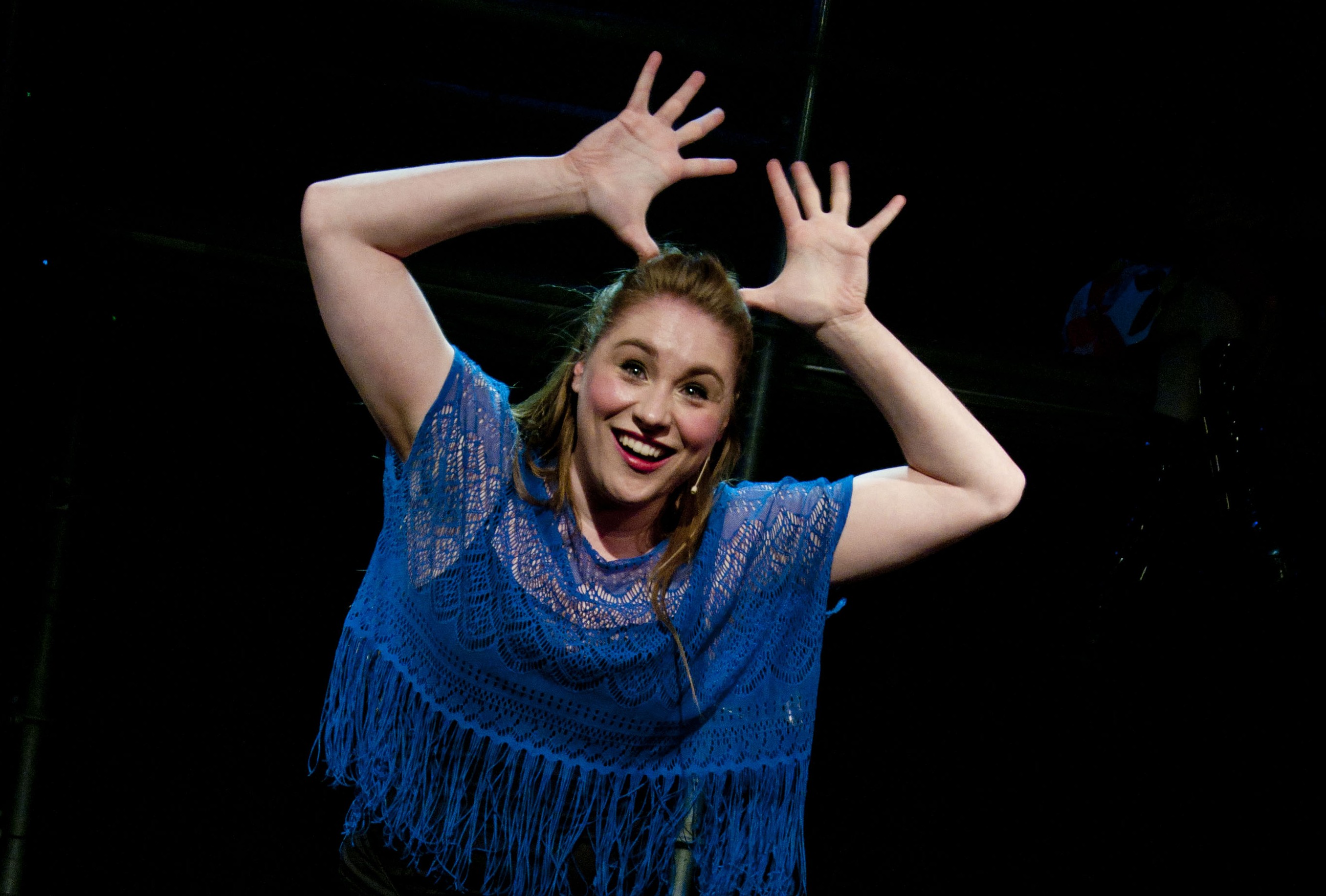 One of the most dynamic roles in all of musical theatre, it’s very hard to deliver a performance as Rent‘s performance artist/activist Maureen that stands out beyond what’s expected from the much-talked-about character. In The Lower Ossington Theatre’s 2013 production, Brittany Scott roared in for Maureen’s late-act-one entrance and quadrupled the energy of the production.

One of this year’s Best Supporting Actress nominees, Brittany stops by the interview series to share her experience dancing the Tango Maureen (actually, I guess Maureen is the only person who Doesn’t have to dance the Tango Maureen- but you catch my meaning).

Can you remember your first experience with musical theatre?
As a kid I watched The Wizard of Oz and Grease religiously. But I wasn’t introduced to it as a performer until I was 9 when I started my acting classes. I didn’t know much of any of it, but all I knew was I really liked it, and I really liked to perform.

What are some of your favourite musicals?
I love so many.. Footloose, Mamma Mia, Rock of Ages, We Will Rock You, Once on this Island, Singing in the Rain, Rocky Horror Picture Show, Funny Girl, Wicked, Chicago and so many more that I can’t seem to think of.

Do you have any dream roles you’d love to play?
I have two at the moment! I would love to play Sherrie in Rock of Ages, and Sheila in Hair!

Where did you develop your triple threat skills?
My skills were developed at different times starting at the age of 7 and then were fully focused on when I got to University. I started acting at 9 years old, I danced on and off starting at the age of 7, and I sang in elementary school, but I didn’t get my professional singing lessons until I was 14. All three areas were worked on, and I was performing all the time. It was in the middle of grade 12 that I decided I wanted to continue on with it and study it in University. I then applied to Capilano University and graduated from there in 2010.

Describe the audition and rehearsal process for Rent.
This might actually be to long to list off! Haha but the first auditions were in and out, basically perform your strongest song, and in the room they would let you know if they wanted to see you for a part before you left. Now the callbacks lasted about 8 and a half hours… We went through a series of rounds. You performed what they asked you to prepare, and right after they would come out and call out the names of the people that they wanted to stay. That was the hardest part to experience, if you didn’t hear your name your chance was done.

Rehearsals were spaced out well and very fair. Not too often were we left sitting around waiting to get up to review and block the show. I did a couple of times, but only because that was the nature of the show for my character, I wasn’t introduced until the end of the first act.

Rehearsing/Choreographing “Over the Moon” was hysterical to create. I was given specific blocking/actions from my director but after that I was free to choreograph and block the song monologue myself, and I did. I could see some people getting a little intimidated over the fact that there was some freedom to choreograph “your moment”, and don’t get me wrong at first I was very unsure, but I was excited and love that I got to do it. It ended up becoming part of my rehearsal process. Taking the time to play with actions, and creating a dance that I would do every time I sang in the monologue was teaching me who the character was, marrying me closer to her, and understanding what I would be portraying on stage.

Creating the relationships on stage were extremely natural and easy for the cast. All of us got along and all of us were willing to take risks to see what worked. For example Jackie [Martin], who played Joanne and I were not afraid to yell at each other, or get in each other’s faces. Which is basically their relationship in the show most of the time. However, it was a little tough to follow how they felt about each other because the two of them were so HOT and COLD! I had to sit in with my director one day and map out when they liked each other and when they didn’t.

Overall the rehearsal process was fun, challenging, exciting and exhausting.

Rent is one of those shows with an iconic original cast. How strongly did the shadow of Idina Menzel hang over you while preparing for the role?
Knowing that I was playing a part that Idina Menzel made known on Broadway was extremely intimidating. It’s a tough gig to pull off, and knowing that the audience was going to come in with expectations or and idea of what to expect was tiresome and scary. I had big shoes to fill in being successful with the part. It definitely caused some sleepless nights.

What did you bring to the role that was all your own?
For this role in particular I really did my research. I watched dozens of clips from community theater to Broadway itself. I saw a continuous character trait that the majority of the “Maureens” embodied- they kept her quirky and weird. So I decided to go another direction, and make her a little more sultry, sexier and darker. It was risky, but I went with my gut, and I ended up a much different Maureen than most.

Maureen is the last principal cast member to enter, coming in almost at the very end of act one. How did you ensure that your entrance would be memorable?
I have to say it was the staging and my costume that made the moment work, and really grabbed the audience’s attention when I entered. I was in a bright red leather 80’s jacket and right when I came out, I took 4 steps and then stepped up on a regular sized table. I also had a cowbell hanging off my waist right down the middle, and I held a drum stick. The whole moment shouted “LOOK AT ME”.

What’s your favourite part you’ve ever played?
As much as I loved playing Maureen, my favourite role by far was playing Rusty in Footloose. I’ve played that part twice now. The songs and the dancing are so much fun. Plus, I related to character quite a bit in the sense of being shy when it comes to liking a guy. I found that to be the easiest to portray on stage because I knew exactly what it felt like.

What are you doing now/ what’s your next project?
Currently I am not doing any Musical Theater, although I have been out the odd time auditioning for some shows. Right now I am working on my original demo. I have been writing music for the last year, and I have partnered up with a couple of people here in Toronto and am working on that part of my life as a singer!

Do you have anything you’d like to add?
Overall the experience I had in Rent was both amazing and hard. I am so honoured to have been nominated for Best Supporting Actress in this part, and can’t believe some of the incredible comments and responses I received after the shows from audience members and reviewers. I cared way too much, and did the best I could for all of you. Thank you!