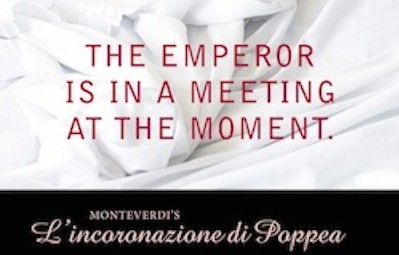 An Operatic Affair… Without the Sexiness

So, I’ve quickly become a neophyte opera fan. I’m seeking out such productions all over Boston, and, in my quest, I found the New England Conservatory. Easily one of the most talented training schools in Boston, the Conservatory boasts a rich reputation for outstanding faculty and performers. I was mostly not disappointed when I tasted a sample of the school’s talent with its recent production of L’Incoronazione di Poppea (shortened in this review, thankfully, to simply Poppea). Poppea is an odd-duck for me. An Italian opera by Claudio Monteverdi, it was a 1650s masterpiece that was neglected for centuries. In fact, some scholars are unsure whether what exists today is the original or a mere adaptation of Monteverdi’s work. Literary arguments aside, the opera presents a fascinating look at history and our perceptions of power. Billed as “Bedfellows Make Strange Politics,” the opera boasts sexy themes, as stolen from Conservatory President Tony Woodcock’s notes, “betrayal, intrigue, the self-indulgent exercise of power, the irresistible  force of sexual obsession.” It’s no wonder that a polished Conservatory would choose to stage such an exciting classic.

But the New England Conservatory’s production of Poppea didn’t feature these themes at all. Led by the restrained Conductor Joseph Mechavich and Stage Director Steven Goldstein, the opera seemed stifled, despite the opportunity for some modern commentary on sex and politics. Staged in the stunningly beautiful Cutler Majestic Theatre, the opera is a treat for the eyes. With a simple but effective set by Scenic Designer Richard Wadsworth Chambers, including a cold wooden long table and plush swiveling chairs, the actors used the set and its many set dressings to wonderful effect. The gorgeous trellis at the back of the stage offered a cold indifference to the outside community which the audience barely sees. This set provides one brilliant effect at the end of the show, shutting its gates on one of the most talented performers and most interesting character, 2013 My Theatre Award Nominee Sadie Gregg as the overlooked and misunderstood Ottavia (unexpectedly, I saw one of her performances, as she shares the role with another actress).

The opera focuses on the love affair between Emperor Nero (James Dornier) and his mistress Poppea (Yujin Kim) with supporting stories by Ottavia (Gregg), Nero’s wife and Empress; the academic and proud Seneca (Josh Quinn); and the lovers Ottone (Vincent Turregano) and Drusilla (Rebekah Holland). When Nero decides to abandon his wife Ottavia in favor of his mistress Poppea, the entire city of Rome (or at least the political side of it) is thrown into a tale-spin with betrayal, pleas to the Senate and the gods, and cries of death. Yup, this is not one of your light Mozart operas; these people mean business. Domier and Kim lead the cast with their fiery passion, except it just wasn’t? Domier had a rich voice and a handsome presence on-stage, enough to make any woman swoon, but his chemistry with Kim was just off when I saw the production. I never felt that their sex and love life was enough to cause multiple deaths and an upheaval of the political forces in Rome, let alone enough to sustain them in bed. In a word, I was disappointed. I blame most of it on Kim who played the role of Poppea much lighter than I expected and nowhere near as ruthless, power-hungry, or ambitious as I could see the role. Next to the stead-fast and mature-sounding Gregg as Ottavia, Kim’s Poppea seemed almost comically child-like and a push-over. While this choice could have played to excellent effect with some clever underhanded coolness and calculation, Kim seemed clueless and uninterested in playing into Poppea’s darker side. Without such conflict in our leading lady, we were forced to endure her silliness in place of real conflict. Perhaps I’m putting a story that isn’t there, but I like the idea that NONE of the characters are good or bad, except maybe Seneca who is played brilliantly by Quinn with such stodgy idealism that his Seneca provides a much-needed humor and satire to the piece, not to mention an impressive bass voice with control and mastery. If each of the characters had avoided trying to play good, rather than embracing some of the less-admirable or less-desirable traits, the opera would have succeeded far more and the true conflict would have resonated. As performed, it was far too easy to love Gregg’s fully-realized Ottavia and scorn Kim’s Poppea, as a mere caricature of a person.

However, the production offered some surprising stand-out performances from other supporting characters. Jessica Harika’s maidservant Arnalta was truly a delight to see and hear, especially one of her closing solos as she rejoices in her lady’s rise of good fortune. Harika’s strong acting and brassy mezzo were unexpected and brightened every scene. Holland’s Drusilla also grew on me, as she pushed passed the almost-stoic Turregano’s Ottone to perform and steal their scenes with her lovely voice and charming grace. Holland flitted about on-stage like a woman in love, and she wasn’t afraid to show her faults as a woman who couldn’t help loving the wrong man.

Despite the lackluster leading story and questionable stage directions (I tried to ignore the weird bisexual story between Nero and Lucano, played with hunky demure by Dustin Damonte), the supporting characters, along with the beautiful score almost made up for any of my concerns about missing the mark thematically. Overall, I was impressed with the quality of the music, which I assume is the focus of a conservatory such as New England Conservatory, but I felt like they needed some heavy acting help in places. I was shocked to read that they have only one acting faculty member as part of the Opera Studies listed in their program; for shame, NEC, for shame. I look forward to their next production of Strauss’ Die Fledermaus, running April 19-23, 2014, again at the Cutler Majestic Theatre in Boston.