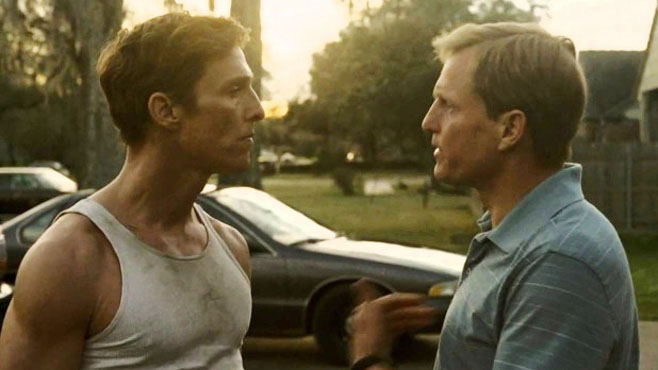 There are moments while watching HBO’s grim and unnerving new character drama – not cop procedural – True Detective when you find yourself laughing. These aren’t just the laughs that stem from feeling uncomfortable, although those do occur, such as in the latest episode when our two detectives visit an outdoor sermon for a cultish branch of Christianity. The chuckle that blurted from my lips when McConaughey’s Cohle waxed poetic on the gullibility of church goers while we’re shown what are ostensibly redneck mentally challenged people raising their hands to the heavens was a laughter of squeamishness.

Now, when Harrelson’s detective Hart responds to Cohle’s speech by saying, “Not everyone wants to sit alone in an empty room beating off to murder manuals,” that produces genuine laughter, derived from a well-conceived bribe. More than anything, “The Locked Room” showcases how McConaughey and Harrelson are engaged in what my watching partner dubbed the most disturbing Laurel and Hardy routine ever witnessed.

While it had been peppered in sparingly in the initial two episodes, comedy was a regular recurring dish dealt up throughout this latest installment, albeit with that unique nihilistic blackness. It’s all meaningless. The only question is whether you accept it or avoid it, but hey, we can still all have a giggle at its absurdity. This is a testament to showrunner Nic Pizzolatto’s craftiness that he can follow up a scene where we learn a churchgoing suspect couldn’t be guilty since he was forcibly castrated in prison with a scene packed with fun back-and-forth banter between the detectives while they eat banh mi sandwiches. These light moments seem to find some propulsion in your gut precisely because all the tones surrounding them have such weight. We want that laughter when we can get it. So very much.

Along with the several CCs injection of humor, “The Locked Room” also settles into a narrative parity between our two protagonists. The men have established their uneasy dynamic and continue to build upon the testiness, sometimes playfully such as at the banh mi restaurant, other times in a more malicious manner such as when Harrelson’s Hardy returns home to find McConaughey’s Cohle having mowed his lawn and drinking lemonade with his wife. What’s Cohle doing here, acting suspicious in a tank top, and drinking a cool beverage with his partner’s neglected wife? Whatever it is, Hardy makes sure to set up his tortured partner immediately on a double date.

See, funny. The gallows humor sparkles like dark purple next to black.

The literal imagery of the episode also displays moments of twinkling wonderment, such as when Cohle crosses the outdoor sermon’s field while an oil tanker trudges slowly up a canal in the background. My watch party and I couldn’t be sure if it was real or CGI, or for that matter, which would be more impressive. The tanker brought so much to the ambiance without adding anything to the story; it could have been a fortuitous setup or a scripted post effect, but it was glorious. Every episode holds these moments, when the Lousiana scenery pulses from the background to the forefront of your attention. The burned church from the prior episode added a similar effect.