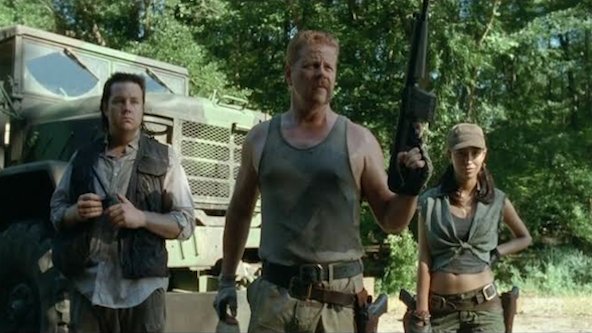 The Walking Dead has spread their cast of characters across the forests and suburbs of Georgia, and this week’s episode features fighting themselves, walkers, and just regular human jerkfaces. After letting Rick, Carl, and Michonne have last week off, this episode further develops their new family dynamic, and immediately tries to tear them apart.

Rick is still recovering from his brief bout of walker-tinged unconscious, and struggles to just shuffle around the house. With Rick still recovering, Michonne and Carl head out on a supply run. They search through their new neighborhood, going from house to house, and Carl soon learns more about Michonne than anyone on the show. Michonne makes every attempt to get Carl to laugh, a challenge with any morose teenager, not just one in a zombie apocalypse. It helps them connect at least, and soon they share intimate details of their past lives. The most surprising of which is Michonne’s revelation that she had a son named Andre before the walkers appeared. This has been hinted at in several episodes, but hearing her confirm it is still a shock. Carl is taken aback as well, especially when he realizes that Michonne has told no else of her past.

This further emphasizes Michonne’s decision from the premiere episode, where she rejects repeating her initial actions as a lone survivor, and commits to being part of a larger group of survivors. She lets other people care about her, and she has to start caring about other people. Revealing her past brings those events to the surface of Michonne’s mind and makes her emotionally vulnerable when they stumble upon a tragic scene in one of the houses. In one of the rooms are the remains of a family who choose death over facing the walkers, and Machine is horrified to think how close her own life came to mirroring this people.

Back at the main house, Rick is awoken when a group of regular humans arrive on the street and enter the house to raid. As The Walking Dead has proved over and over again, humans are even more dangerous as walkers. Rick immediately hides underneath the bed, leading to a humorous scene where on of the raiders flops down onto the mattress, squishing Rick between the bed and the floor. Another raider enters the room and a fight breaks out over the bed, ending with the first would-be-napper strangled on the floor. Rick seems to have made the smart decision by hiding, and now has to get out of the house. A few tense scenes follow of Rick tiptoeing around the second floor trying to avoid the group, in a deadly game of hide and seek. After carefully avoiding the group, Rick heads to climb out the bathroom window – and finds a raider sitting on the toilet. A fight breaks out and Rick subdues the other guy, and remarkably without anyone else hearing the noise. He sneaks outside, and almost preparers to fight a raider camped out on the porch (hey look it’s beloved character actor Jeff Kober!), when someone in the house reanimates as a zombie. This gives Rick the perfect opportunity to sneak away just as Michonne and Carl come up the road. They flee, leaving yet another home behind.

Character Spotlight: Glenn
Glenn wakes up in the back of a truck with his new traveling companions. There’s Sergeant Ford at the wheel, the mostly silent Rosita, the apparently smarter than he looks Eugene, and enemy turned pit of sadness Tara. Glenn asses his surroundings and bangs on the window until the truck stops and he jumps off. Glenn grabs his gun and starts to head back the way they came, determined to find Maggie. Ford, being the kind of macho asshole that excels in the post-zombie world, tries to force him to stay. To his credit, Ford at least gives words a try, explaining that they are headed to Washington D.C. because Eugene is a scientist who knows how the zombie outbreak began. This is their mission, as Ford puts, and even if it doesn’t seem that Glenn leaving would jeopardize it, Ford still puts his foot down. And when his words don’t work, Ford and Glenn just start punching each other. The sounds of their fight attract walkers from the surround fields, and Eugene grabs a machine gun to hold them off. Despite being an incredible smart scientist, he manages to hit everything but the walkers, including the truck. After Ford and Glenn stop their macho fighting and take out the zombies, they realize that the fuel tank has a dozen holes in it, leaving them stranded.

Glenn doesn’t say much in this episode, which is exactly the point. In the first season, Glenn was the anxious, nervous everyman, who acted as a lot of comic relief. Once he and Maggie hooked up, he became kinda sad and depressed. Now, however, it appears that Herschel’s death and Maggie disappearance re-energized Glenn. Now that he isn’t obsessed with the possibility of danger, instead he’s neck deep in it, Glenn has planted his heels in the ground and found his inner hardass. He doesn’t even bother to try to talk or joke his way around Ford, Glenn just punches him right in the face. It looks like Glenn will no longer be a passive supporting character, and the splintering of the survivors has given Glenn the chance to be the lead in his own story. When Glenn heads back south, it’s the others who follow him for a change.