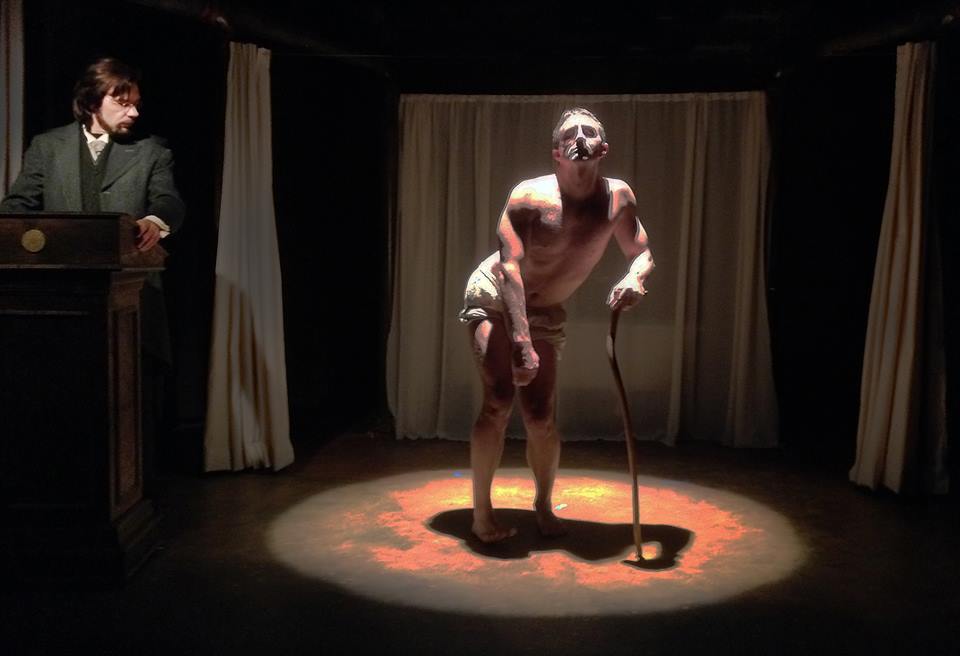 I always get excited to see a show that I have never seen staged. There is something thrilling about having no pre-conceived notion about what to expect, and being met with an entirely new experience when you enter a theater. This was the case when I saw Salem Theatre Company’s production of Bernard Pomerance’s The Elephant Man last weekend. Though the drive to Salem can be a long one, it was well worth it.

Pomerance’s script takes the true life story of John Merrick, a man born with a horrible disfigurement and elevates the story to a commentary on humanity, difference, and the true value of human interaction. John Fogle smartly centers his direction on the performances, expertly drawing out every last bit of nuance and craft from his actors and focusing the audience’s attention on each character’s relationship with Merrick.

The title role is in good hands with Marc St. Pierre, who we first see barely clothed and standing as tall as Frederick Treves (Joseph O’Meara), a surgeon who takes a particular interest in Merrick’s disfigurement, describes Merrick’s condition to the audience. As Treves continues speaking, St. Pierre’s body twists, his face contorts, and his presence transforms. From this moment, his embodiment of the character never waivers and without the use of prosthesis or excessive theatrics, he truly convinces the audience that he is “The Elephant Man.”

Soon after Treves rescues Merrick from his life as a side-show attraction, Treves brings him to London Hospital where, with the support of donors, he gives Merrick a home. Treves seems dedicated to making Merrick “normal” but, despite his best efforts, Merrick’s physical presence is so disgusting that no one will go near him. Then, Treves reaches out to Mrs. Kendal (Linda Goetz), a famous actress at the time who he believes may be able to bear the sight of Merrick as she is “trained to hide her true feelings and assume those of another.

The scenes between Goetz and St. Pierre shimmer with a beautiful pace and a sense of truth. Particularly enthralling was their first encounter when Merrick surprises Kendal with his insightful and sensitive take on Romeo and Juliet. As their dynamic back-and-forth quickens, the connection between these two performers becomes evident and Pomerance’s script is elevated to its highest. This was partner scene-work at its best.

Unfortunately, this excellent script or pacing doesn’t quite hold up through the rest of the show. What starts off as a well-forged commentary on humanity and the way society often misappropriates the struggles of others for our own benefit or comfort becomes rather thin. It feels as though Pomerance was in a rush to figure out how to end the play, so he dismisses Kendal, reveals that Merrick is dying, and begins to focus on Treves’ moral struggle: Was Treves truly acting in Merrick’s best interest or was he serving his own? Fogle makes a smart choice by performing the script without an intermission which I can only guess was an effort to sustain the momentum of the first half through to the end. Sadly, I think that was an impossible hurdle to jump.

I can’t tell whether to fault the writing or the performance, but Joseph O’Meara’s Treves never fully connected with the audience. He starts out wonderfully, with honest eagerness and interest in Merrick, but as the play reaches the latter half, he falls just as flat as the writing. As the scenes draw on, the gap between O’Meara and the audience grows larger until I essentially cared nothing for how his character’s story ended.

Speaking of endings, equally dissatisfying were the final moments of Merrick’s life. Again, I cannot tell if this is the fault of the author or the actor (or the ridiculously tiny bed that St. Pierre is asked to act upon), but, earlier in the play, Merrick states that he must sleep sitting up as the weight of his head is too great to lay down. In the final moments of the play, Merrick essentially chooses to lay his head down after a discussion about life and chance, crushing his windpipe and suffocating him. This begs the audience to ask whether Merrick chose to end his own life, but neither the author nor the actor seemed to have an answer.

Ultimately, despite flaws in the writing and some less than polished performances, The Elephant Man at Salem Theatre Company remains a worthwhile theatrical experience. St. Pierre and Goetz alone are worth the price of admission, but they are supported by some very smart staging and technical designs. Of particular note was Matthew Gray’s sound design which created an immersive environment during transitions and scenes, and Nate Bertone’s scenic design which was remarkably simple, but clever and well used by Fogle.