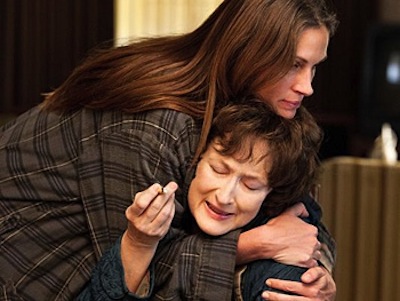 Adapted from her Tony and Pulitzer-winning play by the same title, Tracy Letts pairs with director John Wells (The Company Men, Showtime’s Shameless) to bring the family’s hecklings and toxic secrets to cringing audiences nationwide.

Falling somewhere between a Mike Nichols film and a Tennessee Williams play, August: Osage County depicts the sloshy confrontations of an unannounced family reunion, replete with surfacing sins and a side of biscuits and gravy.

Much like the play, most of the action happens within the home or at least on farmland owned by the Weston family. Potential audience members will be quick to purchase a ticket to witness the onstage battle between Meryl Streep and Julia Roberts.

The film begins with Sam Shepard delivering a Coen Brothers-like opening, setting up audiences for the classic story before admitting, “I drink. And my wife takes pills,” just as Streep comes mumbling and bumbling down the staircase.

While there is much more to the film itself, it truly begs an audience rather than any type of explanation. Moving through disclosures of child molestation and incest, the feeble martyrs dance like blind tornados, trying to avoid the storm years too late.