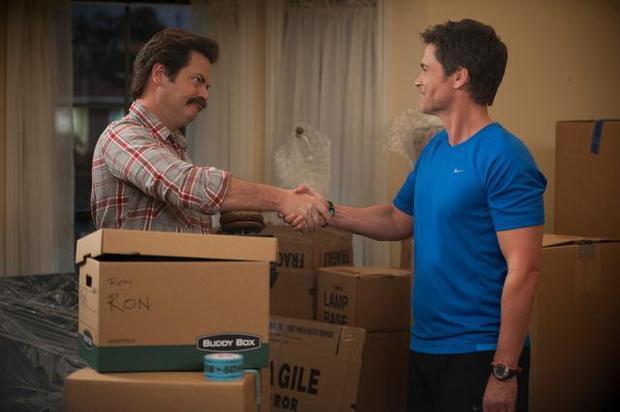 This week said a tearful goodbye to Ann and Chris on Parks and Recreation. While this wasn’t the funniest episode, it was definitely an emotional one as everyone struggled to figure out the perfect way to send Ann and Chris off.

Leslie already knows exactly what she had to do for Ann before she leaves. She has to throw the perfect party, which encompasses all holidays, obviously. She even gets Oren to portray the Easter Bunny.

After the party, Leslie knows she has to break ground on the lot that first brought her and Ann together all those years ago, but of course there has to be someone out there trying to foil her plan. Nobody is allowed on the lot, especially not Leslie Knope, the Leslie Knope from Pawnee. And so, she and Ann team up to get Harold and the Public Works department their free soda back, having to call in favor after favor (one of which reveals Ann dated Perd) and while they don’t get to ceremoniously cut the ribbon (the ribbon cutting man was certainly impaled on his own giant scissors), Leslie and Ann break ground on the lot that was once that troublesome pit that started a friendship together.

Meanwhile Ben, Tom, Andy Larry, and Ron are feeling inadequate in their gift giving after Chris gives them each a thoughtful and meaningful gift that came in a “buddy box” specifically for them. That is, except for Ron, who shook the man’s hand. Twice. Together, they gave Chris a gift certificate for three pans, when he really needed pots, and a bag full of random stuff like paper. They spend the rest of the episode trying to come up with the prefect gift and the perfect way to say goodbye to Chris. At first they can’t agree, frustrating Tom who says he wishes they were Donna, reminding us all how perfect those two really are together. Eventually, Ben comes up with a truly wonderful gift for Chris. Ron makes Chris a new “buddy box” out of his own wood so that Chris can fill it with new memories for his new child and family. They each burned their initials into it, with Larry (Gerry? Oh, who knows anymore) burning all his initials in because he didn’t know what to do. Chris quickly ruins it when he puts his tears in the box as his first memory, upsetting Ron because saltwater will warp the wood. Either way, it’s the perfect gift and Chris knows exactly who would have come up with the idea: his best friend Ben.

April, on the other hand, can’t wait for Ann to leave. She even snuck into Ann’s house and packed the essentials for her: knives, bras, and loose onions. But, she can’t fool Ann and the two who were once rivals share a sweet goodbye. Ann knows April loves her, even if she doesn’t make her say it. Meanwhile, Andy, as usual, really has no idea what’s going on and wishes Ann a good trip to Mexico.

Ann and Chris leave and for a moment, it looks like Leslie will not be able to recover, but Ron quickly suggests they all get breakfast because breakfast foods can cure everything, and they all move on towards a Pawnee without Ann and Chris.

Ann and Chris worked well together, but this episode showed that their true relationships were between Ann and Leslie and Ben and Chris. I will definitely miss Chris and his over the top personality. As far as Ann goes, I’m going to have to agree with Ron’s touching sentiments, which made both Ann and Larry cry, “goodbye, Ann. I have enjoyed parts of our time together.”