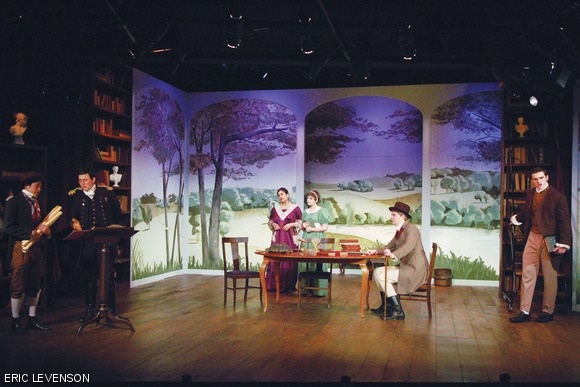 MIT’s Arcadia Not the Pastoral Ideal

Tom Stoppard’s 1993 play Arcadia has been called one of the finest plays by a contemporary playwright; I would have to agree. The play offers a juxtaposition between a turn-of-the-nineteenth-century country house and the present day. The characters have delightful interplay through the props and general atmosphere in the English country house, Sidley Park. This blurring of past and present, as the present-day characters try earnestly to discover the truth behind this lost and forgotten past, offers increasing complexity for the audience. Personally, I think Stoppard is a genius, however, this genius presents much difficulty when translated from page to stage. It is with this difficulty that I turn to my review of MIT’s production of Arcadia.

I was surprised to find that MIT was tackling such a technically and academically challenging work like Arcadia. However, on closer examination, the themes of knowledge, the search for truth, dichotomies, and time are well-founded and natural thoughts for MIT students, artistic or otherwise. Unfortunately, the difficult production offered a mixed bag of performances. Led by experienced director Kim Mancuso, I was surprised at the level of inconsistency among the cast. Olivia D’Ambrosio’s dialect coaching is spot-on, however, with each of the actors mastering the appropriate level of accent while maintaining clear diction and emphasizing their characters. The subtle nuances in language and voice between the past and present were appreciated touches. The set was cleverly designed by Sara Brown, including a wonderful backdrop of the Sidley Park grounds. The costuming by Katherine Stebbin proved slightly silly in points; Thomasina’s headband felt out of place and Lady Croom’s dresses never fit or flattered her. The men faired remarkably better, surprisingly, as Septimus Hodge looked dashing and Bernard’s multiple pieces perfectly tailored his personality.

In the past, we focus on Septimus Hodge, played with brilliant charm by Garrett Schulte, and his presence at Sidley Park with his precocious pupil, Thomasina Coverly, played with some affectation by Keenan Sunderwirth. Schulte offers some stellar moments at the beginning of the show as he perfectly glides through lesson and conversation with Sunderwirth; Schulte raises an eyebrow, shifts his weight, and delivers his wit (and underlying humor) with poise and restraint. Sunderwirth seems to struggle to match Schulte’s skill. She never feels fully genuine or comfortable playing a young girl who must mature over the play. Her mannerisms come off as affected rather than effected by the performances around her. In general, most of the “past” scenes suffer from this discomfort, notably present in Neil Fitzgerald’s Ezra Chater, who is a mockery more than a character. Even if every other character thinks you’re an idiot, you as a character should not play yourself as if you are a mere character with stupid tendencies. I was shocked that much of the humor in these scenes is either grandiose or non-existent, especially with any of Majdolene Khweis’ Lady Croom’s scenes. It’s almost as if the actors do not understand Stoppard’s wit and humor. For a play like Arcadia, it is as much about what is not said as what is said; the subtext and “hidden humor” would have elevated this production to the  proper level.

Interestingly, the scenes in the present day shine in contrast. Whenever I’ve read the play, I saw these scenes as much more sluggish, but, under the incredibly accomplished hand of Trevor Mulchay’s Bernard Nightingale, the scenes clip along at a devilishly fun pace. While I had some difficulty adjusting to Mulchay’s choices, I found that his interpretation of the eccentric professor of literature to be wonderfully clever and incredibly necessary. In fact, I will have trouble imagining a Bernard without such energy in future productions. With constant movement and a flurry of hand motions, Mulchay commands the scenes in a way that is aptly orchestrated for his dynamic within the house. Playing the “straight men” to his fop, Katie Roe’s Hannah Jarvis and Matthew Davis’s Valentine Coverly react perfectly to Mulchay’s every move. However, Roe and Davis lack some of the vitality when left alone, which causes their moments to drag without purpose or conflict. It’s almost not worth mentioning how much Jaclyn Wilson’s Augustus/Gus Coverly bothered me, a silly caricature of the boy; she does much better in her scenes in the past, surprisingly, demonstrating a good attitude and tone as Thomasina’s brother.

Overall, the production felt long, though the actors seemed resilient and committed, despite missing much of the humor and grace of Stoppard’s writing. To be fair, Stoppard is pretentious; you have to enjoy him belaboring you with his philosophy. However, underneath a lot of this esoteric rants, some clever moments lie which wait for the informed actor to explore and enhance.  I have to blame the director for not encouraging and coaching her actors to find this humor, and to admonish such educated students for missing such humor. However, the production appealed to most audience members as a very intellectual and clever work, offering some exciting and motivated performances.