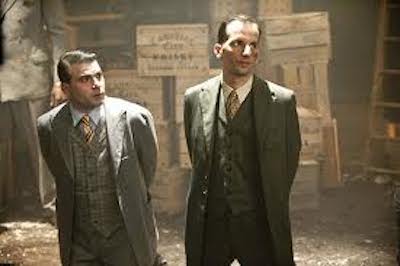 Lou Vanaria: Building on Every Role

The bright eyed boy from the Bronx “who did good” and became an example for others to strive for more. Lou “Crazy Mario” Vanaria never thought he would ever work side by side with legends like Chazz Palminteri and Robert DeNiro. Lou was always a singer and performed in a local band for years. He belted out famous tracks by recording artists Frank Sinatra, Jimmy Roselli and Jerry Vale amongst others.

Then came the day his mother informed him about an audition for a movie about the Bronx. Lou was curious thinking it the audition was for a singing part. He soon discovered it was for an acting role. Lou decided to leave but not until lead actor Chazz Palminteri stopped him. Chazz liked his look and ended up casting him for the role of Crazy Mario. Hence his acting career took shape. The film was Bronx Tale which his performance led to him being casted in another project Young At Heart with Olympia Dukakis and his boyhood idol, Frank Sinatra.

“I would have to thank Robert DeNiro and Chazz for my start in the acting business. If it wasn’t for them I would still be just singing. DeNiro never lost his cool or was disrespectful to anyone on set. He knew everyone by name and said good morning and goodnight to everyone everyday.

He admits that he treats acting and singing as two separate entities. Yet he would welcome a role were he can incorporate the two. At first Lou enjoyed working on any film projects that came his way. But when he began taking on roles for TV he realized television was more for him. He admits that working on TV shows brought in consistent revenue and less of a work load. One of his longest running roles was on the sitcom called Kirk for three seasons.

After working on the show Lou returned to his love of singing. He began making appearances at prime locations like Nino’s and Jilly’s in NYC as well as appearing in Foxwood’s with Jay Leno and Connie Francis. At the same time he began booking guest spots on popular shows like NYPD Blue, Law & Order and Third Watch. Following these developments he had the opportunity to shot a pilot with Jim Caviezel called Person of Interest, and starred with Danny Aiello in a movie called Stiffs available on Amazon.com.

Lou admits that when fans approach him they typically refer to him as “Crazy Mario”. Even though it flatters him it is frustrating when they forget that his real name is Lou. But he takes it all in stride. Lou would soon take on a minor role in HBO hit Boardwalk Empire. But as minor as it was it ended up opening more doors for him.

Since his role on Boardwalk Empire he landed parts in over ten projects. The most recent were films like Once Upon a Time in Brooklyn, Contract, The Wolf of Wall Street, Joe’s War and Friends and Romans starring Michael Rispoli and Annabella Sciorra.

Even though, Lou has spent countless hours on honing his acting skills on many projects he has never left his love of music behind. He is currently signed to record label called Tangerine which released his debut album Louis Vanaria – For What It’s Worth just this past Christmas. It is available anywhere music is sold.  Lou is man of many talents who is always looking to spread his wings to anything that comes his way, for what ever its worth.