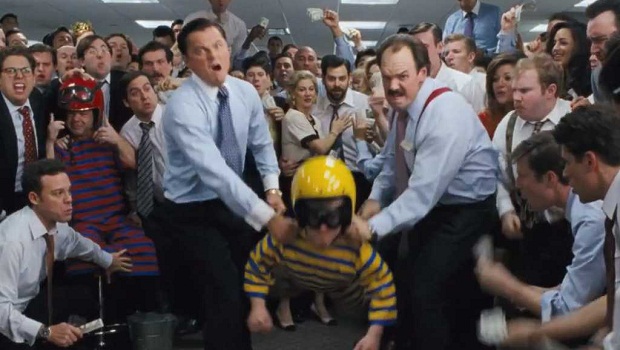 Telling the story of Jordan Bellfort (Leonardo DiCaprio)’s rise and fall on Wall Street, a rise fueled by cocaine, hookers, and the winking eye of regulatory bodies, Martin Scorsese’s three hour long opus swaggers on screen with the confidence and slightly judgmental gaze of the director’s best films. Perfectly chosen music, an impeccable cast, and a story that boggles comprehension fill out the rest of the movie. It’s actually a pretty perfect companion piece to the season’s other big Oscar contender, American Hustle.

Leonardo DiCaprio brings a yawning neurotic emptiness and desperate yearning to the part of the con man/wall street broker who brought the idea of manipulating the stock market to a whole new level. He also re-masters the charisma and charm that first made billions of teenage girls sit through a three and a half hour movie sixteen times. He’s alive in a way I haven’t seen him on screen in a long time, and it’s clear that getting to step out of his “scowl and frown” comfort zone is an essential part of DiCaprio regaining his magnetism on screen.

The real surprise, cast-wise, is Jonah Hill. Despite a decent turn in Moneyball, and the by far most “acting” part in This Is The End, I’ve never been particularly impressed by Jonah Hill and kind of consider his first Oscar nomination a result of an over-enthusiastic Academy Awards campaign that took what they could get. But here, Jonah Hill the awkward comedian disappears into his role as Bellfort’s right hand man, a chubby, polyester suit wearing underachiever who comes alive under the heady mixture of hubris and cocaine.

Like Scorsese’s best pieces, The Wolf of Wall Street makes crime look really fun, even while casting a judgmental eye on it. The exploits range from the legitimately fun to the shockingly obscene, but this isn’t a movie that wants to punish the audience along with the characters. Instead, the downfall comes not from disgusting toilets and crawling dead babies, but from the sheer buildup of excess and the ultimate emptiness that reveals. In that way, the film’s overindulgent running time actually serves to put the audience in the same mindset as the characters: we’re moving along, enjoying all the midget-throwing, cocaine-blowing, orgy-having absurdity… until suddenly we’re not. It’s still hilarious and captivating, but we’re suddenly removed from the characters and their fun, and almost overwhelmed by the excess and naked ambition it belies.

The Wolf of Wall Street is a fun, satirical, hilarious masterpiece, and my second favorite Scorsese movie of all time. In a year that’s been a true embarrassment of riches in terms of cinematic excellence, it still stands out for being so ambitious and well done.