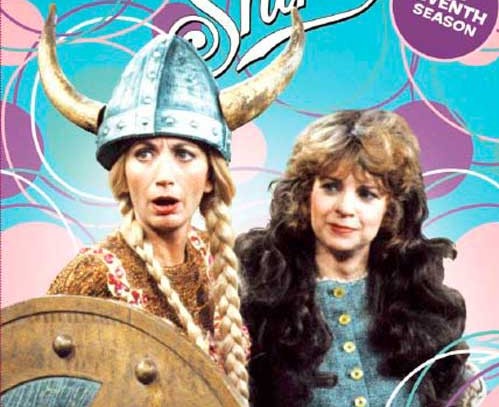 Laverne & Shirley on DVD, via Hollywood

The 7th season of Laverne & Shirley (just released on DVD) is at once a perfect encapsulation of the series as it stands in TV history and a complete anomaly.

The characters are exactly the same (Laverne= saucy, free-wheeling loudmouth; Shirley= uptight innocent; Lenny & Squiggy= strange and over-the-top; Carmine= all over the place but somehow still charming; Frank= dad), the formula is all there (the girls get up to hijinks, the hijinks are resolved, the audience remains unclear as to whether or not Shirley and Carmine are a thing), the tone is the same blend of pre-Sex and the City gal pal humour with Happy Days goof. Through wildly inconsistent storytelling (there’s one episode where Laverne is moving in with a guy she’s apparently in a serious relationship with but whom we’ve never seen before and will never see again), high-concept spoofs that fall completely flat (the end of the season is full of murder mysteries and operas and dance numbers that are just a waste of time), and writing that’s somehow even less clever than the old-school predictability that makes up Joanie Loves Chachi, the show is grounded by the indefatigable charm of young Penny Marshall. She can hold down a rare dramatic moment or lay out a brilliantly timed one-liner but she’s absolutely mind-blowing when it comes to physical comedy, easily up there with the legends of sitcom world (that’s right, I’m talking Lucy). In one episode near the season’s end, the girls go skiing to meet men and spend literally about a third of the episode attempting to successfully ride the T-bar to the top of the hill. It’s a rare laugh-out-loud sequence the likes of which I honestly haven’t seen on TV in far too long. If Laverne & Shirley‘s seventh season gives us nothing else, it gives us that and it’s more than enough (though it also gives us a guest spot from a young and hunky Jeff Goldblum, so that’s not nothing).

At the same time- Penny Marshall-y and formula-following as it still is- season seven is a very strange beast. It’s the last full season before Cindy Williams got pregnant, demanded a lesser workload, sued the producers, and got out of her contract. With that in mind, the season, in retrospect, is a goodbye to the dynamic on which the show succeeded. Every time the girls fight, that hangs in the air like the 20/20 hindsight sent to destroy all carefree sitcom antics. The more immediate problem, though, is the move to Burbank that happened in season 6 and is still in full effect here (save one uneventful return to Milwaukee for a high school reunion). Even if the complete absurdity of moving an entire show (complete with supporting players who have no reason to make the move with the leads) across country somehow jives with the heightened day-to-day happenings of the Happy Days spinoff universe, Laverne & Shirley specifically loses a lot of its interest factor when the girls are happily splitting a massive apartment and working at a department store as gift wrappers. The decidedly blue collar reality of their jobs as bottle cappers in Milwaukee was key to the show’s premise and remains key when the show is discussed in terms of its legacy. The juxtaposition of their girlish adventures and dating exploits with a manual labour job was unique and still doesn’t exist on TV. Yes, something of Laverne and Shirley went into every female-driven friendship comedy that came after, but they had just as profound an impact on the creation of My Name is Earl and Roseanne as successful TV enterprises. Well, seasons 1-5 did. Seasons 6 and 7 are almost like a female version of Two and a Half Men (for the purposes of this analogy, Squiggy will serve just fine as a half man). Season 8 is not even really Laverne & Shirley at all.

Season 7 of Laverne & Shirley is both standard Laverne & Shirley and a capsule of a very weird time in a classic sitcom’s trajectory. It was simultaneously a show about to be pulled away from its founding principals and show that already had been. Something of a mess, but a mess with Penny Marshall… and young, hunky Jeff Goldblum.

A Note on the DVD:
Once again, nothing to hold on to in terms of Special Features. At least here we get a gag reel. A very short, very unenlightening gag reel, but at least it’s something. There’s also original promos for all the episodes, but that’s a very lame excuse for a special feature.