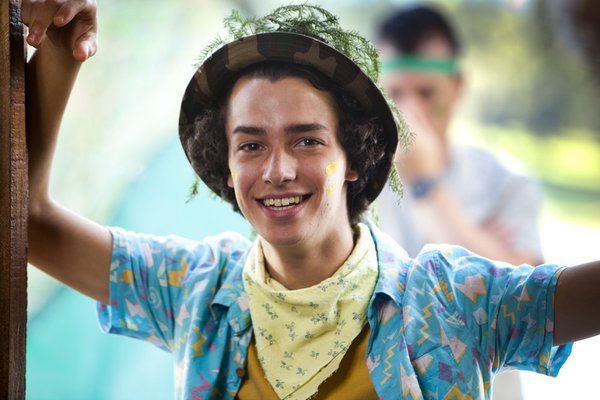 Last summer was a splendid season of TV. Usually the summer is a wasteland of reruns and reality shows but not 2013, it was the home of The Newsroom‘s creative heyday, the beginning of the end for Breaking Bad, and some of the best seasons of Suits, Rookie Blue and Drop Dead Diva yet. Breaking Pointe made its triumphant return, and even Big Brother gave us something to talk about. But what really impressed us was the unexpected wealth of new scripted fare, from the astounding achievement of Netflix’s Orange is the New Black to the wonky ride of CBS’s Under the Dome, to the intoxicating thrill of USA’s Graceland.

One of our favourite things to come out of Summer 2013 was a little show on NBC called Camp. It was exactly that- Camp, about a group of counsellors and campers at a family outdoor getaway. It was utterly charming and gave us some of the most memorable scenes of the summer, mostly at the hands of a lanky goofball named Buzz, the precocious but deceptively sensitive son of Camp Little Otter’s owner. Charles Grounds is the young actor who played the role, nominated in this year’s My TV Awards for Best Supporting Actor AND for Best TV Couple for the tentative charm of Buzz’s complicated relationship with his feisty childhood friend Grace.

When did you know you wanted to be an actor?
I’m not really sure there was a defining point in my life because I was always performing at home when I was home schooled and creating and reciting monologues in the garage even during Winter! I remember always being brought back into the school careers counsellors office because I said I wanted to be an actor!

Who are some of the actors who’ve always inspired you?
I’ve always looked up to River Phoenix and his brother Joaquin Phoenix along with Heath Ledger, Bill Nighy, Gary Oldman and Philip Seymour Hoffman.

How did the role on Camp come about? Tell us about the audition process.
I remember getting given the script and calling my agent saying I didn’t think I could play Buzz but they convinced me to give it a shot. Two months later I got a phone call after I had just rolled my ankle at the skate park saying I was test contracted. I had to ask what a test contract was! After that they had organized for me to fly to Sydney for a call back but that got cancelled. They then phoned me back to say everyone is going to watch your audition tape over in the states and that we should have an answer that following Friday. I couldn’t  sleep the night before and despite my blood shot eyes and bags I was still awake and finally I got a phone call from my agent saying I got the part. I was home alone and had just recently lost all my contacts in my phone so I couldn’t call anyone! Three weeks later I flew off to start pre-production.

What was it like playing Rachel Griffiths’ son? Had you been a fan of her other shows?
To be completely honest I hadn’t seen much of her work before I was cast. I was watching trailers on IMDB one day and then noticed a news article on CAMP. My mother’s character name was at the top then followed by Rachel’s. Safe to say I watched a lot of her past performances after that!! Playing her son was a blessing as I got the opportunity to watch and learn from her. It was a master class in acting – she taught me a lot that I will never forget.

Did you go to summer camp as a kid? How did the experience of filming the show compare to the real thing?
Summer Camp isn’t that big in Australia compared to America. I’ve been on Skateboarding camps and school camps but nothing compared to the set they built for the show. They created an entire world for us to play in. After watching a few films and documentaries on summer camp I was blown away about how accurate the set was.

Buzz began the series as a goofball but ended up carrying some of the most dramatic arcs of the season. How did your approach to the character change over the course of the season?
Each new block I always sat down with the writers and discussed the episodes to get an idea about their visions to put us on the same page. Buzz is an eccentric oddball but slowly throughout each episode he’s learning from his faults. Just adapting to the mood of the show and what Buzz has been through in past episodes always helped. The best thing about Buzz is that he keeps falling over but getting back up and learning along the way so each new episode he brings a different maturity and understanding.

In addition to your Supporting Actor nomination, you and Charlotte Nicdao are also nominated for our Best TV Couple award. Tell us about the slow-burn development of Buzz and Grace’s romance.
Buzz the babbling jester and Grace the passionate feminist are two peas in a pod. Getting to work with Charlotte was wonderful and watching her character take shape through the series was a privilege. I really didn’t think Buzz had any idea that Grace was going to knock him off his feet. But that’s what was so great to play the shock and realisation that came after!

Do you have a favourite moment or episode?
Making out with a tree dressed in a bikini with the words ‘Baby’ smeared over my stomach was definitely a highlight. I loved Buzz so much because he always got himself into the weirdest situations and had to try to swim for breath each time only to have to do it all again.

When did you find out the show wouldn’t be coming back for a second season? Do you have any ideas about what would have happened to Buzz in coming seasons?
I was back taking some timeout on my family farm in Melbourne when I got the call. It was disappointing but at the same time everything happens for a reason so I’m excited to see what’s next to come. I was looking forward to seeing Buzz in a relationship and what it would have been like when Lily’s character Marina was adopted into the family.

What are you working on now?
I had a few readings back home and now I’m currently living in Los Angeles working on meetings and setting up the next stage of my life. I had no idea I was going to be blessed with CAMP so I can’t wait to see what’s next.