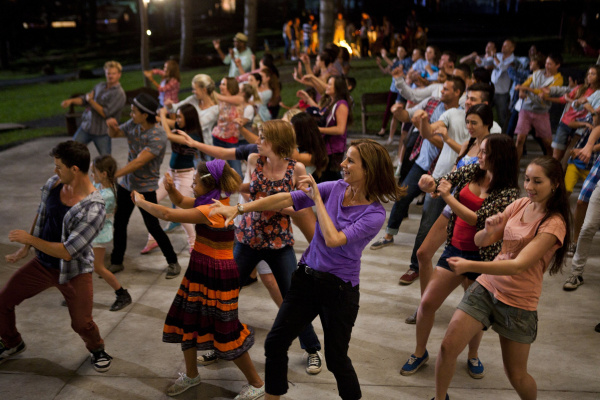 I feel like I’ve been waiting for one of the networks to make Camp for years. It’s the perfect summer show- low stakes, lots of fun, character-centric dramedy. And scripted. It’s important that it’s scripted (I start to go crazy with only Drop Dead Diva and Rookie Blue satisfying my insatiable craving for lighthearted but still consequential scripted fare). With relatively low budgetary requirements (they need a camp, that’s about it) and only one real star (Rachel Griffiths- glad to see you again, Brenda/Sarah!), Camp fits perfectly into the hot season with 10 weeks of characters who, every year, gather together for 10 weeks to live in their own little microcosmic society. It seems like a no-brainer: without the harsh winter competition, surely an original scripted NBC dramedy can bring in at least enough ratings to survive amidst reality shows, reruns and the occasional cable drama (as long as you don’t air it on Sunday nights). It wasn’t a perfect show, nor did it really live up to what I wanted it to be, but I’ll still be very sorry (and a little bewildered) to see Camp go should NBC not decide to let us spend another season at Little Otter.

Let’s start with the rough stuff, get that out of the way. The show’s weakest link in season one was definitely Sarah, an unlikeable dud of a character whose predictable and overdramatic arc involving restlessness with her seemingly perfect life was just absurd. I liked the idea of including a summers-only couple as part of the ensemble; the strange intensity then complete dropability of camp relationships is one of the really intriguing phenomena that I wanted explored. But Sarah and Robbie were super boring all the time. They were boring when playing small stories that could have been great (like what happens when he makes a move towards taking the camp-only-ness out of the relationship?). They were boring when playing gigantic, ridiculous stories fuelled by her being an absurd character (like cheating on Mr. Perfect Robbie with a famous writer who made the unlikely decision to seclude himself at a summer camp in an attempt to meet a deadline). The only time Sarah and Robbie weren’t boring was when Robbie was somehow involved in another character’s story, where handsome and charming actor Tim Pocock could be handsome and charming (and sometimes even a little bit funny!) without the perpetual awkwardness of the show’s weakest actress, Dena Kaplan. The one (and only) good thing about Sarah was that she was a competitive swimmer and Kaplan actually looks like she could be a competitive swimmer (sturdy with broad shoulders and strong arms and legs instead of being a twig pretending to be an athlete). I feel like on paper Sarah could have been really interesting (I like the idea of an intense person- say someone in training to make the Olympics- in an intensely un-intense atmosphere like summer camp), but Kaplan is really stilted and her entire downward spiral was a sinkhole of a story that dragged poor Robbie down with it.

The show’s only other real problem is that Mack is a little all over the place. She’s the main character but, despite the intense TV pedigree of Griffiths, she’s not yet one of the show’s most engaging. She had her moments in season one, certainly, but Mack is definitely being outshone and outdone incredibly easily, which doesn’t work all too well when she’s supposed to be our guide to all things Little Otter. Not to mention the fact that there are multiple characters who are supposed to be in love with her. That said, whenever she shows her weird side, she’s instantly winning (see Figure 1, Mack being awesome while leading a camp-wide dance).

Everyone else is either thoroughly wonderful or exactly as unlikeable/annoying/questionable as they should be. The grownups that surround Mack are sheer supporting player fun (except for Roger, the antagonizing but sexy rival camp director- he’s just annoying). You’ve got Genevieve Hegney’s wry Sheila with her penchant for camp-inappropriate daydreaming, her perpetually just-off-camera husband and inexact number of kids. Then there’s the only really solid couple at family camp- Todd and Raffi (Adam Garcia and Christopher Kirby). They’re the wisest and funniest bi-racial gay parents of an adopted teenage Asian girl and pre-pubescent Russian boy on TV, and they’re the grounding force of Camp, acting as a sounding board for Mack’s problem of the week and offering witticisms where needed. They’re also the parents of one of the show’s best young characters, Grace (the excellently precocious Charlotte Nicdao). The oddball slowburn development of Grace and Buzz’s connection was one of the real pleasures of the season, her deadpan ability to call him on his crap routinely being the highlight of the show. Buzz, for his part, started out as a sort of annoying sidekick character before morphing into the series’ most compelling portrait of humiliation and triumph. The completely IMDB credit-less Charles Grounds is awesome in the role of Mack’s horny gangle-monster of a son and made the fool character the breakout star.

Buzz’s principal foil comes in the form of Tom Green (not that Tom Green) as Kip- the other strongpoint in the show’s young cast. While it took Buzz awhile to reveal what made him interesting (and not just funny), Kip came in as an intriguing figure. An emo city kid who wanted nothing to do with Little Otter, Kip was brought to camp by his single dad (a loving, well-meaning sort in the vein of Burt Hummel) and immediately set about proving that he wasn’t the Leukaemia-stricken sick kid he’d been for so long. As played with a complete lack of self pity by Green, Kip was immediately the sort of character you both rooted for and wanted to hang out with. He was funny and bright and just skeptical enough about the weird societal system of “camp” that he spoke for the audience (it’s a weird culture shock for a city kid all of a sudden faced with canoes and forced group activities- we can’t all be Robbie). Rather than a dramatic storyline, Kip’s illness was purely backstory- something that shaped his world view and gave him an inner life, secrets he could keep from the other characters, information that Psychotic Comic Genius Chloe could use to blackmail him into being her boyfriend (in one of the season’s funniest subplots, with a dark edge). Kip fell hard for misunderstood “bad girl” Marina (Lily Sullivan) and while she was never quite alluring enough for that to make a ton of sense, their little circle of outsiders (with Buzz and sometimes Grace) developed nicely within the strange teenage world of the Counsellors-in-Training (CITs) and it was just sweet and painful enough seeing Kip pine the way he did as Marina accidentally fell for the amusing dolt-in-a-hat Greg (Jordan Rodrigues, gamely in on the joke). Meanwhile, Kip had to extricate himself from the clutches of Psychotic Comic Genius Chloe while fighting his excellently realistic teenage boy instincts (Psychotic Comic Genius Chloe is hot and likes to makeout with him in the outdoor showers, what’s a boy to do?).

The final- and I might argue most important- piece to the Camp character puzzle was Cole, delightfully underplayed by Nikolai Nikolaeff. Cole was the character who made me really like Camp instead of just rooting for it. He’s the free-spirited drifter character whose yearly presence as the Little Otter handyman symbolizes the arrested development of his actual life. He was a promising pitcher recruited into minor league baseball out of highschool, but he blew out his arm and never played again. But that information actually came quite late in the series, well after I would guess most of the audience had already fallen pretty hard for Cole and his completely inappropriate love for Mack. He’s the hyper-loyal mischief maker, the misunderstood, underestimated good guy who’s the only person Buzz can really talk to, the only person who knows just what to say to Kip, the only person who can save Little Otter and Mack when Roger or Mack’s ex-husband or the threat of a cell phone tower encroaches on the arcadia of the campground. He’s Mr. Unexpected Hero Man, almost to an over-the-top degree (see Figure 3- he’s dancing with a child ! The writers were clearly worried the magic of Cole wasn’t strong enough yet). It’s a credit to Nikolaeff that I never tired of just how hard the Cole-is-Amazing button was pushed. In my opinion he reached his apex of underestimated-but-awesome in the series-best second episode, but I’m incredibly sensitive to underestimated-but-awesome characters (Don, anyone?) so maybe the card wasn’t as overplayed as I thought it was and the writers were just clueing the audience in, in case they’d somehow not noticed that Cole was a Noble Roman all along.

Camp did a great job in season one of giving each episode a structure that kept arcs from becoming plot. There was always something going on for the characters to frame their personal stories around- parents weekend, inter-camp olympics, the CIT lifeguard test. The season’s best episode was based around a camp-wide epic war of Capture the Flag that showed off exactly who each character was and how they related to each other and to Little Otter’s traditions. Kip was taken prisoner by the Psychotic Comic Genius Chloe, Mack was pitted against her son as Buzz faught on Team Yellow with his dad, Raffi and Todd killed each other early so they could break out the cocktails. At its best, that’s what Camp was- honest and funny in a small, human way. Kind of the perfect summer show.

Finale Grade*: B
Season Grade*: B-

*Graded with a slight summer curve