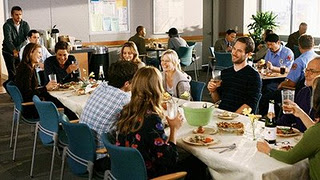 This post is not about Family Ties the sitcom starring Michael J Fox. This post is about Brothers & Sisters, I just liked the title.

Last night’s episode of Brothers & Sisters was an incredibly typical one. I like typical Brothers & Sisters a lot so I was very pleased that it was so. There was the customary multi-way phone call, a couple scenes featuring Nora cooking and meddling, a small family conflict, a large family crisis, a coming together and a big family dinner.

In this episode Elizabeth (“Tommy”‘s daughter) got sick which led to her true paternity being revealed so she could get a transplant. Turns out Kevin’s the father. This threw both Justin and Scotty threw loops, dragged up a bunch of issues for Tommy and led to a reconciliation between Tommy and Kevin (who’ve been feuding since Tommy fired Kevin from the family business earlier this season).

There was of course the big dramatic, and sometimes cheesy, moments that Brothers & Sisters relies on. Balthazar Getty (Tommy) pulled off his role as the conflicted and concerned father surprisingly well, and it’s always nice to see lots of Kevin and Scotty scenes (Matthew Rhys and Luke Macfarlane respectively). Kitty (Calista Flockhart) got some quality dramatic air time in as well this episode, as did Justin (Dave Annable).

One of Brothers & Sisters’ best qualities is it’s comedic blend. Even in one of their most dramatic episodes to date, the writers made a point of having lots of lighter moments as well. Kevin’s lame joking made his dramatic scenes with Scotty all the more poignant. Much of this episode’s comedy fell onto Sarah (Rachel Griffiths)’s shoulders, which she handled with her usual finesse. The best joke of the night? When Sarah told Justin he could finally sit at the grown ups table for Thanksgiving and Justin turns to Saul to say “did you hear that uncle Saul? I finally made it”.

But what made this episode one that’s at once typical and wonderful was the family-ness. I’ve never seen another show capture the intricate family dynamic quite as effectively as Brothers & Sisters does. Their banter resonates so much more with me than that of even the best of TV families.