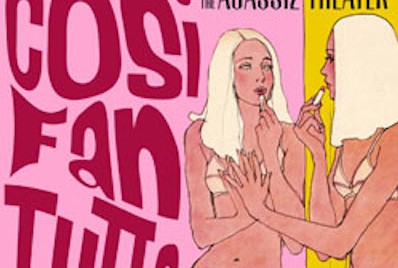 I have been lucky enough to sporadically attend the opera since age 15. Some combination of school and interest in music made me gravitate toward such opportunities. And as much as I would love to say that I instantly fell in love with the genre, it took a while to build up my stamina for such a show. I recall falling asleep in my warm, dark balcony seat in the last act of Die Fledermaus, waiting for resolution to come. I enjoyed the opera, certainly, as a lover of both drama and music—but like a teenager inoculating themselves to the bitterness of coffee in the hopes of attaining the “cool” status of real enjoyment—I wanted to love the opera more than I did moment to moment. Some of this was youthful impatience at the stories’ refusal to hurtle along at a pace to which I was more accustomed, and some was the ease of getting lost in the foreign language. Most of all, perhaps, was the important assumption that opera was for adults, and not just any adult: mature, classy, intelligent adults. Regardless of the truth in that assumption, I discovered the only hitch in my growing love for opera was its desire to be thought of as deathly serious while being patently ridiculous.

All of this is a long preamble to my impression of Cosi Fan Tutte by the Dunsten House Opera Society at Harvard University. This is undoubtedly at the student theater level, and while that comes with a certain “scaling back” on your expectations of productions values, the overwhelming youthful energy bursting out embraces the ridiculous, pokes fun at its own limitations, and drags you along for the ride. This was the first opera I’d seen by people my own age or younger. The most obvious push toward accessing their young demographic was the translation. I was happy to see that the opera was to be performed in English since the beautiful Aggasiz Theater did not appear to have a subtitle bar, but I was not expecting such a modern translation. The talk ranged from casual banter to grand poetics with the occasional obscenity thrown in for flavor. There’s a certain whimsy to be had hearing characters sing so beautifully in such modern language. The grand sound of opera seems sincere when singing the poetics of foreign language, while the absurdity cannot be unheard with phrases like: “It’s your girlfriend, she’s pissed.”

The singing itself sincerely impressed me. Of the six main roles, four were filled by seniors—something that I expected from such difficult material. Yet, even then, I was surprised by how professional they sounded. The ladies specifically maintained a light easiness with the extreme vocal flexibility Mozart’s score famously demands. As both the film Amadeus and supposedly Emperor Joseph once said, there are just “too many notes.” Indeed, once your ear becomes accustomed to the music, it’s easy to forget just how many trills and runs that the singers fit in. I was particularly taken with Camille Crossot in the role of Despina. As a sophomore, she was more than keeping up with her older peers and even shining in the ensemble pieces.

The ensemble pieces, of course, are what make this opera unique. Unlike many of the other commonly performed operas, the highlights of this score are mostly duets and quartets, instead of solo arias. There are few standout solo pieces, such as Fiordiligi’s song about being the rock of Gibraltar, or Despina’s aria, but they occur far less often that the average opera. Therefore, the group dynamic is almost more important that the individual strength of each performer. While both Amelia Ross and Allison Ray were incredibly strong on their own, together, they possessed the charm and talent of ten women. They played off each other beautifully, trading off strength in acting and singing moment to moment, such that I could not decide which of them that I liked more. Unfortunately, the gentlemen were not as evenly matched. Freshman Andrew Troska as Ferrando seemed a bit out of his league in a leading role. Eric Padilla as Guglielmo carried the boys’ team vocally. While Troska brought a lot of humor to his acting, going for the over-the-top physicality whenever possible, it wasn’t quite enough to even the score. By the second half of the show, his “award for cute-points” shtick was wearing thin. Although, any comedic ploy starts to strain when continued for three hours.

I say boys’ team and girls’ team intentionally, as the story really is a battle of the sexes. Unfortunately, that story is also as deeply sexist as you would expect coming from a piece written in 1789. Don Alfonso, an old bachelor, tries to convince his two friends, Ferrando and Guglielmo, that their girlfriends, Dorabella and Fiordiligi, could not possibly be faithful. He makes a bet that he can prove their fickleness and fakes the men going off to war. The distraught ladies are then set upon by new strange suitors—their boyfriends in disguise. Hijinks ensue, and, after a struggle, both girls give in and agree to marry the other’s suitor in disguise, wife-swap style. After the wedding, the men fake their return, lay open the deceit, and everyone has a laugh about the fickleness of women. Stage Director Madeleine Bersin addresses this problematic element in her lengthy director’s note. “In order to render the opera’s misogynistic overtones, the joke of the piece instead of a fact … the production transposes Western culture’s classic wife-swap into the world of a 1960’s sex-comedy film”. According to Bersin, such films “ironize and mock them [the overtones] even as they permit their existence”. Ok, if ironic hipster sexism is the only way that we can have fun with this piece and keep gender in mind, I’m willing to buy into it. Bersin and the design team certainly embraced the 1960’s sex-comedy theme wholeheartedly. The set design by Heather Mauldin and costumer design by Rebecca Elliott were fun and functional with swinging doors and belly-laugh-inducing disguises for the men.

However, I put a lot of stock in the idea that if you wouldn’t notice something but for the director’s note, they didn’t do a good job of getting that idea onto the stage. I appreciate the effort to make this piece more gender friendly, but I’m not sure if that goal was achieved. Bersin’s idea that the ladies are playing the game of gender intentionally seems at odds with the text with which she was working. The second half especially labored on the character flaws long enough to strain my patience and attention span, unable to meet the comedic high points of the first half. Either way, this was a great show and a ton of fun. They embraced the wonderful absurdity of opera, showcased a lot of young talent, and offered an ideal entertainment for an opera veteran or enthusiastic newcomer. I highly recommend seeing any future productions by this group.