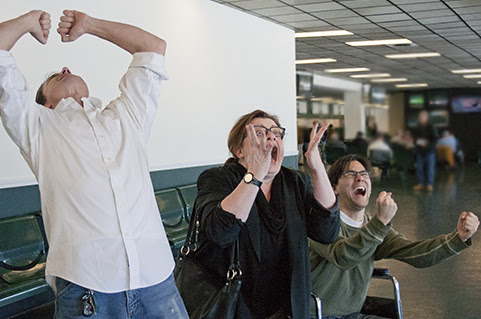 Playwrights want to be profound. One of the main reasons that we go to the theater is to experience drama so palpable that we become engaged enough to take in complex philosophical ideas and unique perspectives on the human experience. So, it makes sense that so many playwrights try to fill every line of dialogue with deep significance and philosophical musing. The trouble with many new works, including Fresh Ink Theatre’s premier production of James McLindon’s Handicapping, is when a playwright overbearingly tries to fill a play with profundity that feels more cliché than thought-provoking. Handicapping has an intriguing premise and the potential to be an engaging and effective piece of drama, but, in its current state, the play suffers from overloading us with cliché sentiments in the guise of poetic observations.

Handicapping takes place at an off-track betting (OTB) parlor in an upstate New York town struggling through an economic downturn. A former college professor, a man in a wheelchair, and another man trying to open the “twenty-seventh pizza parlor in town” spend the day betting on horse races in the parlor, revealing their troubled personal histories and desperate motivations as the day progresses. It’s a purposefully bleak atmosphere supported by Marc Ewart’s gritty set design. We see an exposed bathroom jutting out into the parlor, having just enough rust on the toilet to immerse us into the grungy world of the OTB parlor without becoming cartoonish and distractingly disgusting.

The production’s greatest strength is immersing us atmospherically into the dismal world of little hope in which the characters live. They are generally friendly and amiable with each other toward the beginning of the play, but the drama develops a sense of chill desperation as we learn about the characters’ loneliness and how they struggle to find glimpses of hope in their lives. There’s an entrancingly awkward chemistry among the characters, a kind of anti-chemistry that brings out the bleak atmosphere. It’s a group of unlikely acquaintances who so often seem to dislike each other, and the actors bring out that awkwardness to make their dynamic engaging.

The problem with the performances, though, is that the actors exhibit different levels of theatrical expressiveness. It’s jarring, especially in a work of realism, that everyone in the cast almost seems to be acting in his or her own play, with some actors using grandiose vocalizations and gesticulations and others using a more understated approach. In the opening scene, Laurie Singleton as the Professor has such a rigid physicality and super-articulated voice that she seems almost robotic. Once I realized that the character is an eccentric who should seem out of place at an OTB parlor, Singleton’s choices made more sense. At least in the play’s earlier scenes, though, she seems less like an eccentric and more like she’s acting in a different world from the rest of the cast. As the play goes on, Singleton calms down her physicality and becomes more believable. Her voice likewise feels more grounded and rooted in reality, but keeps a rich quality that resonates and flows with an energized buoyancy.

Alex Roy as Vin, the physically-handicapped better in a wheelchair, giver a subtler, reserved performance. His speech sounds un-recited and naturally outpouring, which is something the rest of the cast struggles to do. His character has a childlike sort of frankness in rudely interacting with other people; Roy plays this frankness with an appealing sincerity. It is easier to empathize with him than anyone else in the play, even while he has some of the most abrasive things to say, because he says everything so earnestly. Kyle Blanchette as Ant, the protagonist trying to raise money for his business, also gives a more rooted performance, but, at times, his voice is so deep and elocutionary that he feels less like a blue-collar worker from upstate New York and more like someone out of a Shakespeare play. If the ensemble could find a better balance of high theatricality and realism, perhaps the drama would be more believable.

The actors can only do so much, though, to work with a text that so heavy-handedly and ineffectually tries to be socially relevant and insightful. Just a few minutes into the play, for example, the characters start discussing the existence of God. The conversation is out of place and seems to serve only to establish the professor as a clichéd, selfishly atheistic individual who says she only “believes in me.” It feels like McLindon only puts that conversation in the play to try to root the action in a grander idea that doesn’t even fit well.

There’s a lot of griping from Ant about being stuck in a small town with family responsibilities and no job aspirations. The dialogue feels like it’s trying to make a comment on the universal struggle to succeed in society, but it’s a gripe that we’ve all heard a hundred times before now. There’s a sequence where Ant confronts someone whom he bullied in high school that ends in a realization that bullies attack others out of their own insecurities. In another sequence, the professor discusses the difficulties of doing controversial research even while having tenure. Perhaps the most unsettling part of the play is when Ant’s love interest gives a monologue about how few good men there are in town, which not only sounds cliché but makes her character appear unattractively desperate while she is supposed to be someone with whom all the men in the play want to be.

Director Tyler Monroe said in a press preview that: “The characters that populate [Handicapping] are some of the most well-developed and fully-textured humans I’ve ever encountered in a play.” That strikes me as quite the irresponsible hyperbole, especially coming from a director who got his M.F.A. in dramaturgy at Harvard, where I’m sure he studied many plays with far more “fully-textured humans” than in this one. But there is a lot of potential in these characters to be engaging. This play’s premise about a group of unlikely friends confronting their failures in a bleak environment is appealing. Perhaps if McLindon can let go of some of his contrived attempts at profundity, then he can explore further the dramatic foundation of this work, a fascinatingly chilling story of struggle and despair. If that element can come out, perhaps Handicapping can become a startling and moving play.