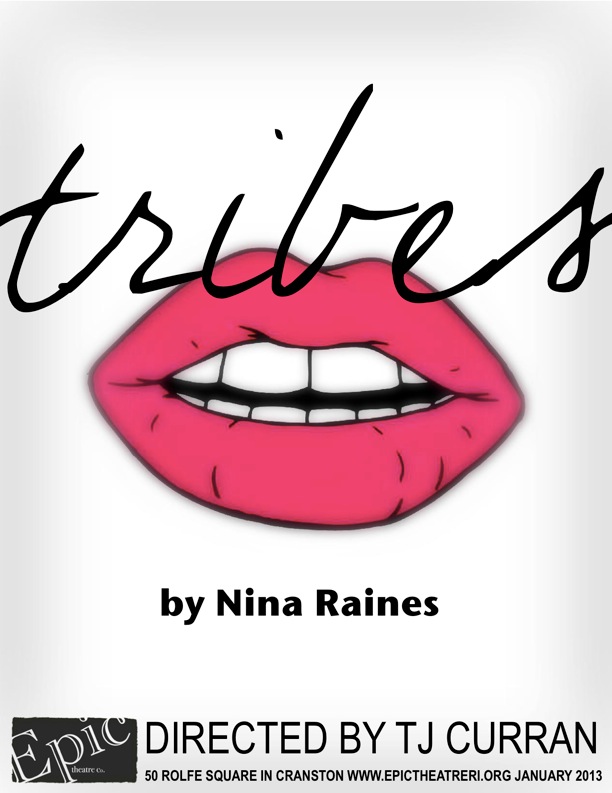 I have wanted to see a performance of Tribes since I missed Speakeasy Stage Company’s production earlier this season. It fetched some stellar reviews for the way that they presented incredibly challenging material. Unfortunately, Epic Theater Company’s production at the Artist’s Exchange in Cranston, Rhode Island didn’t rise to that challenge.

Nina Raine’s script focuses on Billy (Joseph Ausanio), a deaf man who was born to a hearing family. Early in the play, it becomes evident that this family has some very strong convictions, primarily that they refused to teach their son sign language to keep him from feeling “special.” Instead, he is forced to read lips in order to communicate with the world. Billy’s life changes when he meets and falls in love with Sylvia (Stephanie Traversa), a hearing woman who is going deaf and teaches Billy to sign.

Billy’s frustration to communicate is probably only matched by my frustration with some of the performances. The biggest and most ever-present issue is the cast’s inability to locate and maintain an appropriate accent and dialect for the family. Throughout the play, the audience is taken to at least five different countries via their speak patterns. I would have much preferred that they not attempt accents at all, which may have seemed strange given some of the identifiably British language, but it would have been easier to accept, instead of their incoherent mess of language.

That aside, Director TJ Curran did little to help his performers meet the challenges presented by the script. Theater 82 is a difficult venue with a wide, shallow playing-space, and audience seated on two sides. It requires a creative director to successfully stage scenes, but Curran’s blocking was clunky and stale, often leaving actors with their backs to two-thirds of the audience or in an awkward position to engage properly with their scene partners.

Additionally, the play calls for text projections to help the audience understand portions of dialogue that take place entirely in sign language. The positioning of the projector, coupled with Curran’s staging, forced the audience to look back and forth from the action to the projections as if they were watching a tennis match. While the projection is a necessary evil, pulling the audience’s focus so far away from the actors is regrettable and forces a disconnect, which ultimately hinders the performance.

Raine’s script does little to help the performers. It presents multiple challenges, including sign language and projections, but also leaves many sub-plots unresolved and ends untied. For example, late in the play, Billy lands a job as a lip reader for the court system, reading the lips of people on surveillance cameras to help strengthen legal cases. It is later revealed that much of what he submits into evidence is made-up, but we never find out what happens next.

The production is not all bad, however. The scenic design places piles and piles of books as a sort of backdrop to the performance space which provides a nice nod to both the family’s literary and academic background, along with the central theme of the play. The omnipresence of text and words set against the character’s lack of ability to successfully communicate with each other (whether deaf or hearing) is a clever touch.

Despite clumsy accents and some novice choices, the performances also have some moments of light. Ausanio’s joy as he begins to discover the world that Sylvia shows him is palpable, as is his anger and defiance when he ultimately confronts his family and gives them an ultimatum; learn to sign, or no longer communicate with him. Geoff White’s performance as Christopher, the insensitive, stubborn father is too often one-note but shines when Billy delivers the ultimatum and subsequently walks out. Carol Schlink’s Beth is a warm and welcome presence through much of the play. Traversa’s Sylvia however, stands-out as the strongest performance in the show, acting with nuance and a genuine quality that brings life to some otherwise difficult to watch scenes.

Ultimately, Tribes does not stand up to the reputation that this young Rhode Island company is establishing for itself. Nonetheless, I have to appreciate their bravery. Tribes is the third production of their 2013/2014 line-up, and the young company show no signs of letting-up with another four productions to come before the season comes to a close.

Epic Theater Company’s Tribes runs through January 25th at the Artist’s Exchange in Cranston, RI. Tickets are available at www.artists-exchange.org.