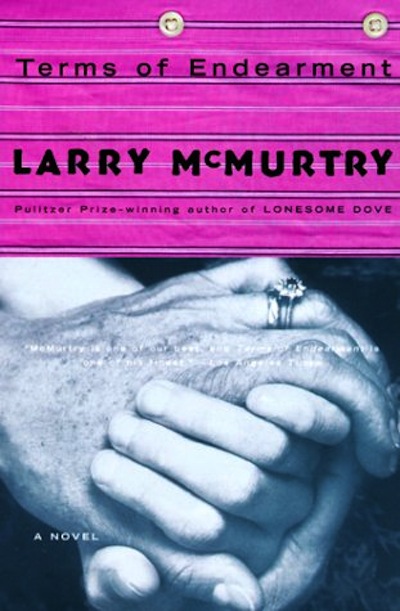 I was looking over the screenplay of Brokeback Mountain the other day, which was adapted by Larry McMurtry and Diana Ossana from E. Annie Proulx’s shattering short story, and I got to thinking what an overlooked writer McMurtry has been. Oh yes, he’s won the Pulitzer, and made writing about Texas and the modern west his own, but he never, I think, has enjoyed the serious respect someone that a John Cheever or Philip Roth has enjoyed. Perhaps it’s because he’s so popular and his novels speak to real people, or people we’d LIKE to be, or know, I have no idea. At any rate, I took down one of his earlier, (and one of my favourite) books to re-read and enjoy all over again, his 1976 bestseller, Terms of Endearment. Most people know of the celebrated movie version, and if you haven’t read the book, you should, because the two are extremely different in terms of their character layout, and because, well, McMurtry writes so damn well. I can think of few writers in the world today, who haunt the memory with such cinematic imagery of his characters’ internal lives.

McMurtry has said that Terms of Endearment is his most European of novels, even though it takes place in Houston and in later parts, Nebraska and Iowa. This is partly because he wrote it while he was in Europe, and partly because he had been reading a great many European writers for several years beforehand. You can see what he means when you find yourself in the lives of these extraordinarily ordinary people, because nothing is plot driven in Terms, life just happens, and the men and women who inhabit his world have to adjust to it as best they can. Perhaps this is why I’ve been enamoured of the novel since I was fifteen years old. It feels like life. People do make bad marriages, and take dissatisfactory lovers to compensate their fear of getting older, even if they can’t articulate what that fear is. They do get sick and they do die at an unjustly young age, and they don’t have any or all of the answers when they do.

If the plot development is sketchy in Terms, then it is all the more remarkable an achievement because we don’t feel stinted or frustrated by its sporadic, whimsical plotline. Nobody particularly DOES anything in Terms, Aurora may or may not decide on which suitor she will marry, and Emma may or may not leave her philandering lout of a husband. In less capable hands, the indolence of the story might have driven even the most patient reader mad. Nothing really appears to happen externally, and yet, so much happens under the surface. This is because of McMurtry’s genius for creating characters that hold the imagination even while doing something as mundane as sitting in a windownook, fluffing pillows. His two main creations, Aurora Greenway, a fifty-ish transplanted Boston widow, and her 22 year old, married daughter, Emma, form the emotional nucleus of the novel.

Aurora is sophisticated yet earthy, demanding yet compassionate, shrewd and disarmingly childlike and at times, childish. She is described as a large woman with stunning auburn hair and an ability to hold everything and everyone enthralled in her orbit, even when she is at her most impossible. Her daughter conversely, is painted in quiet, almost beaten tones, with drab, dull hair and a passive resignation to life.

When I first read the novel, I was fascinated by the over-the-top liveliness of Aurora, and mildly interested in Emma’s day-to-day humdrum existence, but not overly so, since it didn’t begin to match Aurora’s endlessly interesting adventures. As I got older, and read the novel several more times, my interest in Aurora lessened, and I became more and more interested in the dark corners of her daughter’s reasonings and doings. She came to haunt my thoughts more and more in the way her mother had when I was younger, but with less colour and more spare emotional leanness and toughness.

As I got older, it became easier to relate to Emma’s life than to Aurora’s. (How many spoiled, rich, literate ex-pat Boston widows with fabulous hair do you know?) I knew women like Emma, and I knew the existences they lived in the mid-seventies and eighties. I remembered them from my childhood, mothers of my friends, harried at the supermarket, with two or three kids to manage, that weary smile they always managed for you, especially if you were shy, like I was. Emma was a few years older than my mother, but seemed quite her contemporary. She was an ordinary woman, a Mom, a woman I felt I had known intimately all my life. She wasn’t my mother, but she was mothers I knew. As I got older and reread her story again and again, her ordinariness fascinated me more and more. To wit; if Aurora was the ripe luscious fruit basket of a Renoir painting, then Emma was the tough Nebraska winter wheat, bowed but unbroken, pummelled and bloodied, but still standing, her haunting green eyes looking life clearly in the eye.

As the novel progresses, it becomes less a story of Aurora’s comic whimsey and fussy boredom with life than it becomes a study of her quiet daughter’s steeley strength, and internal life of quiet desperation. Emma may lack her mother’s more vivid colour and hilarious vitriol, but she is more than a match for the setbacks and disappointments that threaten to engulf her; a disappointing marriage and a series of disquieting love affairs seem to anneal her toughness, but at the same time, clarify her sense of identity. By the end of the novel, Emma is under no illusions about anything in her life, like her mother, she too is able to see everything clearly, her men, her children, her friends and most all, she can see herself for what she is, and what she has become. She is an ordinary woman with ordinary gifts, but with an extraordinary clarity of thought and vision, which may be why she is so endlessly appealing. If Aurora is a sunlike goddess, then Emma is of the earth, an imperfect but clear eyed and intelligent everywoman. As McMurtry says in a foreward he wrote for a new edition of the novel years later, he hopes that “Emma is what women are, at their best.” Having fallen for both Mrs.Greenway and her daughter through the years, I cannot but help hope as well that he is right.