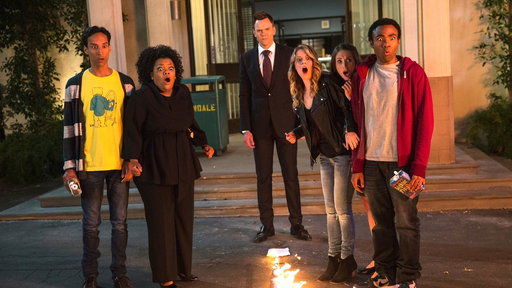 Of all the shows that walk the fine line of will-it-or-won’t-it get cancelled, Community is the one I’ll never understand. It’s about as smart a comedy as we get these days, and the lack of acclaim confuses me more than Nicolas Cage’s morality confuses Abed. It suffered from losing it’s vision along with creator Dan Harmon in season four, but if “Repilot” and “Introduction to Teaching” has shown us anything, it’s that the show is headed back to the same level of greatness experienced by seasons one through three.

In the season five premiere “Repilot” is exactly that, a repiloting of the show. The characters come back to Greendale under the ruse that Jeff is trying to save it. It addresses all the ways in which the characters have changed, while staying true to who they are. It reminds us that Jeff is no longer the slimey lawyer that “once convinced an arson victim he liked his house better burnt” and even mentions Britta’s sudden change from eclectic anarchist to airhead. And where would the show be without Abed explaining the episode to us with pop culture references. I can’t help but wonder, though, if the Scrubs/Zach Braff comment* from Troy was a sly jab to Donald Glover’s own impending departure.

While the show started on a somber note, they never failed to add in moments of gold like Troy being uncomfortable being at Greendale without Magnitude, not Pierce. The best exchange came when Jeff told Troy his identity was based off his relationship with another man and Troy regretfully responded “You found my Clive Owen Tumblr.” It’s those throwaway jokes that’ll be missed most when Donald Glover leaves.

The second episode was more in the comedy groove and while my boyfriend and I have our differences on which episode was “streets ahead” of the other, and whether or not that phrase should be used in reference to anything other than Community, I still believe “Repilot” was smarter overall. The second episode was great, but it rushed back into a regular episode too quickly. I enjoyed the shift I thought the show was taking, but in “Introduction to Teaching” the classroom antics felt all too familiar. With the exception of Jeff being a teacher instead of a student, the episode could have easily passed as a season three episode. I would never know there was development and the episode was less self-aware than the first.

With that being said, the introduction of Jonathan Banks is one of the best casting decisions ever made. He already fits perfectly with the rest of the characters and perfectly fills the role of the old curmudgeon guy that we lost along with Pierce. The introduction of Professor Buzz Hickey, and the imminent return of John Oliver’s Professor Ian Duncan is sure to make this one of the best seasons yet. It almost makes me want to enrol in America’s second best community college as ranked by greendalecommunitycollege.com.

*”That son of a bitch. After everything Scrubs did for him?”