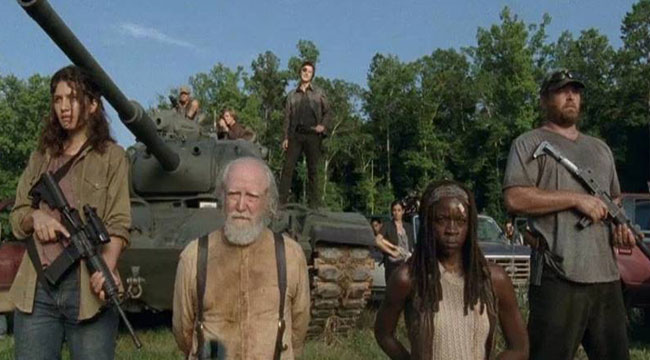 With a slice and a KA-boom, The Walking Dead has reached its mid-season finale as the Governor – er I mean One Eye – as he leads his army of people dumb enough to believe anything in an attack against the prison. But before the explosive hijinks ensue, we have to start with last week’s cliffhanger, when the Governor has Herschel and Michonne in the sights of his gun. Like pretty much everyone on this show, he avoids doing the smart thing and instead takes both of them hostage. The Governor, it seems, is still committed to the not-being-a-complete-murderous-psychopath-in-public, and tells them that he just wants the prison, and if their group leaves there won’t be any violence. Herschel tries to be the peacemaker, seeing if they can’t co-exist. As Herschel points out, they’re both the fathers of daughters, leading the Governor to coldly dismiss Maggie and Beth, because they are not his. Big G heads outside and rallies his troops for a charge against the prison. Because why wouldn’t they listen to the new guy who wants to lead them a murderous rampage against the complete strangers.

Back at the prison, the group is starting to recover from the illness that nearly decimated them. Rick and Daryl have finally gotten around to having that awkward conversation about his unilateral exile of Carol. Daryl is understandable upset, while Rick maintains that it was for her own good. Tyreese, meanwhile, has found some sort of dissected gopher, indicating whoever was feeding rats to the zombies is still around. Rick and Daryl are just about to spill the beans and invoke a murderous rage, when the prison is rocked with an explosion. The Governor is outside, with Herschel and Michonne tied up, and a tank.

The Governor, still deluding himself into thinking he has turned over a new leaf, gives them the chance to leave peacefully. Rick, only slightly fazed by the sight of his old nemesis, refuses to yield the prison. He launches into an impromptu speech about cooperation, resisting their darker urges, and building something better. Herschel smiles as he see Rick return to role of leader that he once inhabited so natural, as he tells the assembled factions that no one is too far gone to come back from the things they have done. So the Governor slices Herschel’s throat open with Michonne’s sword and all hell breaks loose.

Both sides open fire on each other, as the tank starts to blow holes in the fence of the prison, as Walkers congregate towards the noise. Beth and Maggie, almost beside themselves with grief, run to gather the kids and load them onto a bus to safety. The permitter is quickly in pieces, and the Governor’s forces are soon inside. Tyreese gets pinned down, only to be saved by Lizzie and other kids, blasting people away just like the good little psychopaths that Carol taught them to be. The tank, driven by jerkface Mitch, wheels into the prison, and starts blasting shells. People Champion Daryl Dixon uses a Walker as shield and chucks grenades at the tank. He drops one down the gun barrel, forcing Mitch to frantically leap from the vehicle as it explodes. As he stands up in the rubble, Daryl is there to unload an arrow right into his chest. Bad. Ass.

As the fighting intensifies, the Governor’s surrogate family shows up, after he left them behind for safety. Meghan managed to get herself bit by a hidden Walker, and Lilly carries her lifeless body to the Governor. He takes her from Lily, and wordlessly shoots her in the head, to her mother’s horror. The old Governor is back, bringing death with him. And for the main event, Rick tackles the Governor and they launch into their long awaited fistfight. It’s brutal, as they hit each other over and over. Eventually, the Governor gets the upper hand and he sits on top of Rick and chokes him until he turns blue. Just as it looks like the end for Rick, Michonne plunges her sword through the Governors back, and he falls on the ground with blood pouring out of him. They leave him to die slowly, until Lily shows up and shoots him in the head. The Governor is dead, killed by the family he told himself he was protecting.

Rick heads back into the prison, looking for Carl and baby Judith. In the fray, the bus with kids drove off, but no one is sure who was on it. Rick finds Carl, and together they are horrified to discover Judith’s bloody baby carrier. The prison is in flames and overrun with Walkers, and there’s no time to look anyone. Rick grabs Carl and they make run for it. As the survivors head for the hills, Rick solemnly tells Carl not to look back at the prison, it’s been lost.

And the first half of The Walking Dead season four is over, in pretty much the exact way that season three should have ended. The illness storyline got things off to a great start, and gave the group a new threat reflecting the brutal state of the world, something that they couldn’t just shoot away. The Governor storyline, while it had interesting moments, felt like a strange epilogue to last season’s storyline. It really did break the momentum of the eight episodes, and felt rather shoe horned in. David Morrissey is a very talented actor who gives a great performance, the problem is that it seems the shows producers couldn’t decide what to do with the character. While his involvement with Lily and Meghan certainly gave the Governor more motivation and provided an interesting look into his psyche, it just became another case of this-guy-is-crazy-because-we-say-he-is. This should have been the fight between the prison and Woodbury, as the people from that community had a relatively stable life to fight for. The Governor’s new group are just blindly following some new guy with bloodlust. It makes the situation completely black and white, robbing it of a lot of emotional complexity.

That being said, the first five episodes were among the best that The Walking Dead have ever done. Hopefully now that the ghost from the show’s past has been dealt with, they can move forward with the same high level of story-telling and characterization. The show is trying, and has gotten better at including newer details to add color to the story. This episode’s denouement features a return of the zombie-fide Clara, the crazy woman who tried to feed Rick to her undead husband earlier in the season. This alludes to the fact that the major theme of the season has been Rick and the Governor trying to shed their old identities. This impossible for both characters, as the past returns and they revert to their real roles, as a leader and a crazy person. Rick had given a similar speech about change and forgetting the things they had done to Clara, but as the appearance of her Walker-self attests to, the past always comes back.